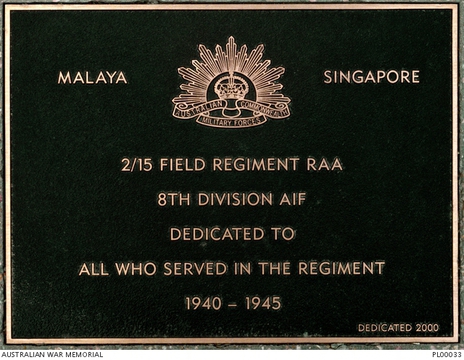 The 2/15th Field Regiment was raised in late 1940 as part of the Second Australian Imperial Force (2nd AIF), and was assigned to the 8th Division.  In late 1941, it was sent to Singapore and subsequently fought in the Malayan Campaign before being captured after the Fall of Singapore. Part of the 8th Division captured in Singapore and its men went into captivity from 16 February 1942.

The Regiment intially consisted of two batteries – the 29th and 30th.  Each battery consisted of two troops, designated 'A', 'B', 'C' and 'D'.  Later, a third battery was raised.  The regiment had an authorised strength of 42 officers and 385 other ranks in early 1941. Each battery eventually consisted of eight guns. The Regiment intially trained with 18 Pounder QF guns and then converted to 3 inch mortars;  hardly the firepower necessary to support a Brigade.  After arrival in Singapore in August 1941, the Regiment was assigned in support of the 22nd Brigade.  In November it raised its third battery and re-equipped with the modern 25 pounder gun / howitzer, and its establishment was boosted to 600 men.

Barely a month later the Japanese entered the war with simultaneous attacks at Pearl Harbour, the Philippines and an amphibious landing at Khota Bahru on Malaya's nort east coast.

The 2nde/15th did not enter the fray until January.  When they did, the regiment's batteries were split up: the 65th supported the 45th Indian Brigade, while the 29th and 30th were sent to help the Australian 27th Brigade.

Throughout January they had heavy tasking, in a fam9us ambush and related actions near Gemas, at Muar and around Ayer Hitam and the Namazie Estate, in the course of which they fired thousands of rounds as they conducted a fighting withdrawal with its supported units. During the campaign on the Malayan Peninsula, the regiment suffered numerous casualties.

A brief lull in the fighting followed, as the Japanese preapred to invade Singapore Island, during which the regiment continued to fire support missions, attacking Japanese positions in Johore. On 8 February, the Japanese launched an assault across the Strait of Johore, with several divisions concentrating on the 22nd Brigade's position in the north-west sector of the island. As the only artillery regiment positioned in support of the 22nd Brigade, the 2/15th was heavily engaged, attacking Japanese barges and assaulting troops, but as the defenders were stretched thinly, their lines were soon penetrated and they were forced to withdraw to prevent encirclement.

During the withdrawal, a large number of guns were lost after the 30th Battery's transport became bogged and had to be abandoned.  The SIgngapore Garrison currendered on the 15th February 1942.

A total of 556 personnel from the 2/15th were captured; they would spend three-and-a-half years in Japanese captivity, with more than half, 294 men succumbing to the systematic overwork, brutality and malnourishment inflicted upon them by their Japanese captors.