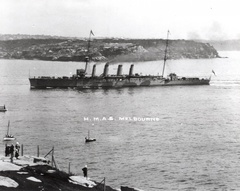 Following the outbreak of war in August 1914, Melbourne spent a brief period in Pacific waters as a unit of the Australian Squadron to prevent attacks by the German Pacific Squadron under Admiral Graf von Spee. She took part in the seizure of the German Pacific possessions, and on 9 September 1914 landed a naval party on Nauru Island to carry out the destruction of the wireless station. Her return to Sydney on 20 September 1914 ended this phase of operations.

Her next task saw her proceed to Albany, Western Australia to become an escort for the first Australian & New Zealand troop convoy. On 1 November 1914 Melbourne sailed from Albany escorting in company with HMAS Sydney (I), HMS Minotaur and the Japanese cruiser Ibuki, the troop convoy comprising 38 transports.