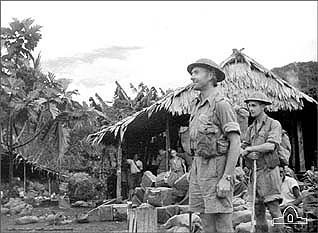 Deservedly one of the most famous Australian Infantry Battalions of the Second World War, revowned for its heroic fighting withdrawal in the face of overwhelming odds against the Japanese in the opening stages of the Kokoda campaign.

After the First World War the defence of the Australian mainland lay with the part time soldiers of the Citizens Military Force, also known as the Militia. The Militia was organized to maintain the structure of the First AIF and kept the same numerical designations. The Militia units were distributed in the same areas in which the original AIF units were raised.

Following Japan's sudden entry into the Second World War, a new 39th was raised as part of the 30th Brigade to garrison Port Moresby. The 39th joined the 49th Infantry Battalion, already in Moresby, and the 53rd Infantry Battalion, which had been quickly formed in Sydney. The 39th arrived in Moresby at the start of January 1942, with little military training.

The 39th was initially used for garrison duties and working parties. In June it was ordered to proceed up the Kokoda Trail to block any possible Japanese overland advance. The 39th B Company and troops from the Papuan Infantry Battalion (PIB) reached Kokoda on 15 July. Japanese forces landed at Gona, on the north coast of Papua, a week later and quickly moved inland.

Fighting ceased for almost two weeks. During this time the 39th was joined by the 53rd and the headquarters of the 30th Brigade. On 23 August the 2/14th and 2/16th Battalions from the 7th Division 21st Brigade also reached the area. The Japanese resumed their advance on 26 August. Despite hard fighting the Australians were forced back to Eora Creek on 30 August, Templeton's Crossing on 2 September, and Efogi three days later.

Exhausted, the 39th was relieved and sent down the track to Koitaki to rest. The 7th Division 25th Brigade (comprising the 3rd Infantry Battalion and the 2/1st Pioneer Battalion) came in to reinforce the Australian effort. Bitter fighting ensued and the Australians withdrew to Imita Ridge on 17 September. However, the Japanese had reached their limit and on 24 September began to withdrawal. The Australians reoccupied Kokoda on 2 November.

Meanwhile, after a month at Koitaki, the 39th returned to Port Moresby in mid-October, where it prepared defensive positions at Pyramid Point. The interlude from fighting was brief.

Having pushed the Japanese back across the Kokoda Trail, the 16th and 25th Brigades and two inexperienced American regiments were engaged in the "battle of the beachheads" at Buna, Gona, and Sanananda. The Japanese positions were well-prepared and heavily defended. At the end of November the 30th Brigade was flown across the Owen Stanley's to reinforce the attack. The 39th became attached to the 21st Brigade.

The 21st Brigade captured Gona village on 1 December and the Japanese withdrew to Gona Mission. The Australians advanced on the Mission on 6 December but were stopped by the Japanese. The 39th D Company was "literally shot to pieces". The combined fighting strength of the 21st Brigade was now down to 755 men, of whom 403 were from the 39th. Nonetheless, on 8 December the 39th attacked again and captured half of the Japanese defences by nightfall. Gona Mission was captured the next day and on 18 December the 39th took the last Japanese position at the creek west of Gona.

Fierce fighting continued further along the coast and on 21 December the 21st Brigade and 39th moved to the Sanananda Track. The next morning the 39th moved into a forward position called Huggins' Road Block. The 39th defended the area and attacked nearby Japanese positions. In the New Year it withdrew to Soputa and returned to the 30th Brigade.

The 39th had suffered heavily. When the battalion was flown to Moresby on 25 January it mustered a mere handful of soldiers - 7 officers and 25 men. It rested at Morseby and gradually gained strength as men returned from hospital.

In mid-February the 39th was instructed to stand by for operations in the Wau area in readiness for another Japanese attack. The attack never came and on 12 March the 39th boarded a troopship and returned to Australia. On 24 March the battalion was given only 14 days of home leave to recharge from five months in Papua.

In July the 30th Brigade, comprising the 39th, 49th, and now 3rd Battalions, was disbanded. Having performed so well along the Kokoda Trail and at Buna, this came as a disappointing surprise to the 39th. Members of the 39th who had originally been called up for service were absorbed into another Militia unit, the 36th Infantry Battalion. Volunteers for overseas service were absorbed into the 2/2nd Infantry Battalion.