No. 21 Squadron (RAF) Viribus vincimus (By strength we conquer) 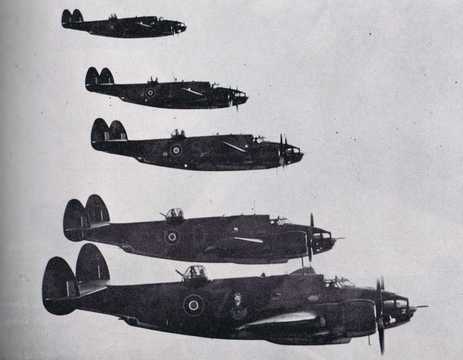 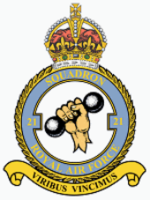 No 21 Squadron RAF is included on this site as one of the many RAF units in WW2 to which RAAF personnel were posted and in which they served, fought and often died.

Originally formed in WW1 , the squadron was reformed on 3 December 1935 at RAF Bircham Newton in Norfolk as a light bomber squadron equipped with the Hawker Hind biplane.

The Munich crisis saw the squadron mobilise in preparation for a possible war with Germany. On the outbreak of World War II, the squadron was converting to the Blenheim IV light bombers and so was not fully operational, thus operations were initially limited to reconnaissance missions.  In May 1940, as a result of the German attack on the Low Countries and France it began daylight attacks on advancing German columns in the Low Countries and France, flying its first mission of the campaign on 11 May, when 11 Blenheims unsuccessfully attacked a bridge at Maastricht, with two Blenheims shot down and eight damaged.

On the same day a new 21 Squadron was formed at RAF Bodney, still with the Blenheim, but re-equipped a few months later with the Lockheed Ventura. It was the first RAF squadron to use the Ventura and was not operational until 6 December when it attacked the Philips works at Eindhoven. The aircraft was never really suitable for the squadron's activities and they were replaced in 1943 with the ubiquitous Mosquito. The squadron turned to night raids on continental Europe; it also carried out precision daylight raids including a notable attack on Gestapo headquarters in Denmark, and involvement in Operation Jericho.

During the invasion of Europe following D Day, the Squadron was flying night intruder attacks against German targets. The Squadron moved to RAF Gutersloh in December 1945. It provided courier services between Blackbushe and Nuremberg in support of the Nuremberg Trials before it was disbanded on 7 November 1947.

On 21 September 1953 the Squadron was reformed at RAF Scampton as a bomber unit with the English Electric Canberra. It was involved in many overseas detachments and was part of the forces involved in the Suez operation of 1956. It was disbanded on 30 June 1957 at RAF Waddington.

On 1 October 1958, 542 Squadron was re-numbered as 21 Squadron with the Canberra B6, and was detached to Australia in support of trials of nuclear weapons. When the tests were completed the squadron disbanded on 15 January 1959.

Formation again on 1 May 1959 at RAF Benson saw a completely different role for the squadron: it was equipped with the Scottish Aviation Twin Pioneer as a light transport squadron, operating in Kenya and Aden in support of the Army. With the withdrawal of British forces from Aden the squadron was disbanded on 9 September 1967.

The squadron's last formation was on 3 February 1969, when the Western Communications Squadron was re-designated at RAF Andover. It provided transport for senior officers in the western part of the United Kingdom using the Devon and Pembroke. It was disbanded following defence cuts on 31 March 1976.