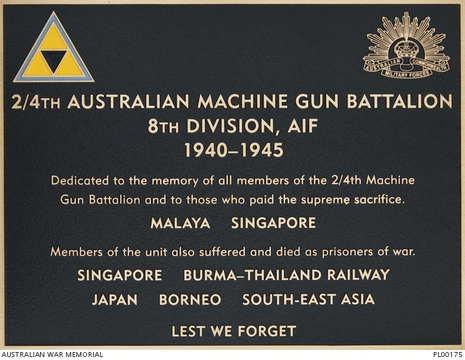 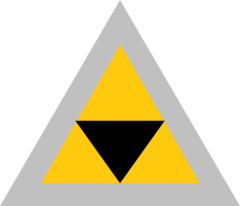 The 2nd/4th Machine Gun Battalion was raised for service as part of the 8th Division in the volunteer Second Australian Imperial Force (2nd AIF) shortly after the outbreak of the Second World War. Formed in late 1940, the battalion was established to provide direct fire support using Vickers Medium Machine Guns to the division's three infantry brigades.  It was the fourth, and last, such unit raised within the 2nd AIF, and was drawn largely from Western Australia and after formation, the battalion concentrated near Perth for basic individual training before moving to the Adelaide Hills at Woodside Camp to complete more advanced training.

The 2nd/4th subsequently embarked from Darwin for Malaya, arriving in Singapore in the final days of the fighting on the peninsula. In the wake of the withdrawal of British and Commonwealth forces to the island, the battalion was hastily deployed in support of the remaining two Australian brigades—the 22nd and 27th Brigades.  The 23rd had been scattered to the east in what subsequently proved to be futile gestures of isolated garrisons on Timor Ambon and at Rabaul.

The Australian Brigades were defending the north-western sector of Singapore island. During the initial Japanese landing, elements of the battalion were heavily engaged around the landing beaches but they were outflanked and locally outnumbered and so over the course of the following week the defenders contracted towards the centre of the island, and Singapore itself. They suffered heavy casualties during this time, and the remainder along woth the rest of the Garrison, surrendered on the 15th February, becoming Prisoners of War.

Meanwhile, the 7th Division was returning from the Middle East on a convoy.  It was decided to detached the fastest ship, the Orcades,  from the Convoy returning them to Australia.  Called 'Blackforce' after its Commander, newly promoted Bigadier Arthur Blackburn VC, it was sent to 'support the Dutch'.  Their weapons and equipment however were on another ship in the convoy, a fact lost on those directing this fiasco from Australia.  Fortunately they were able to equip themselves from materiel left on the docks for the Dutch by US supply ships.  Meanwhile a detachment of about 100 men from the 2nd/4th MG Battalion, who had been left behind in Australia when it deployed to Singapore, were also sent to take part in the fighting on Java.

After a brief campaign, in which Blackforce gave a good account of itself, the end was inevitable with no relief or extraction plan extant - anpther triumph of the Australian-based planners. Blackburn surrendered the force rather than waste more lives in an ultimately futile defence, particularly as Dutch resistance had effectively collapsed. The majority of surviving Balckforce personnel were taken into captivity around Buitenzorg in mid-March 1942, although some attempted to fight on as guerillas. Eventually these men were either killed or captured.

The POW remained in Japanese captivity until the end of the war in August 1945. During the three-and-a-half years they were held by the Japanese, members of the 2nd/4th were sent to prison camps around the Pacific, where they were used as slave labour and subjected to harsh conditions and extreme brutality. Some were lost in transit on the infamous PoW Death Ships, inadvertently torpedoed by US submarines.  After the war, the surviving members of the battalion were returned to Australia but the 2/4th was not re-raised, nor did any of the other MG Battalions persist into the post War Regular Army.

The envisaged role of the MG Battalion had been transcended by the realities of jungle warfare, by war's end.  It was a style of operations in which the Australian Army would remain enmeshed for another 30 years.