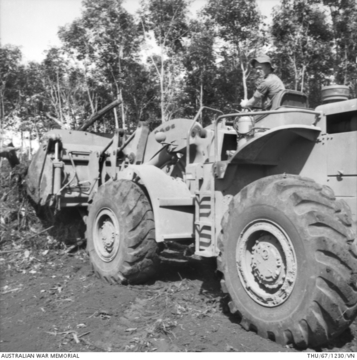 The 1st Field Squadron is the modern-day iteration of the original Field Company of Engineers raised in WW1.

Most recently Field Squadrons have been termed 'Combat Engineers'; for that is what they do - provide a broad range of engineer support in the Combat Zone. Engineers provide mobility support to other arms corps, and impose counter-mobility measures on the enemy.

During the Vietnam War, 1st Field Squadron provided engineer support to the Australian Task Force at Nui Dat.  One of their tasks was to assist the infantry in bunker and tunnel clearance and demolition operations.  To do this, men had to go down into enemy tunnel systems; the so-called "Tunnel Rats".  Most usually Engineers, they went into often active Viet Cong tunnel systems with just a flashlight and a pistol, facing the prospect of an enemy around any corner and booby traps within the tunnels as well as the risk of asphyxiation.  As with many of their tasks, it was one which required a very deliberate and sustained level of courage carrying out one of the most dangerous and nerve-wracking jobs imaginable.

More recently, in the Middle East Area of Operations, Engineers have played a key role in countering insurgent Improvised Explosive Devices, often with the aid of specially trained dogs. This is an extremely dangerous task as casualty figures attest.