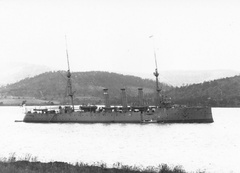 In the days before the outbreak of World War I, Encounter was with the remainder of the Australian Fleet operating in Queensland waters. On receipt of the Admiralty warning order on 30 July 1914, Australia and Encounter returned to Sydney to replenish and complete repairs. War between the British Empire and Germany began on 5 August and the following day Encounter sailed from Sydney and headed north. On 12 August 1914 she intercepted and captured the steamer Zambezi, an ex-British vessel under German control, which became the RAN's first wartime prize. A month later Encounter accompanied the successful Australian operation to capture German New Guinea, escorting the transport and store ships and providing covering fire during the advance of the Military Expeditionary force from Herbertshöhe to Toma.