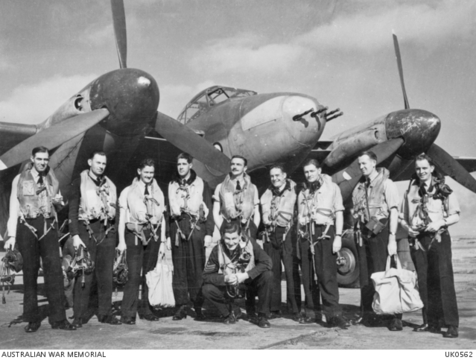 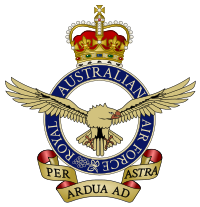 No. 456 Squadron RAAF was formed from the outset as a specialised Night Fighter squadron, under Article XV of the Empire Air Training Scheme.

It formed in mid 1941 at RAF Valley, Isle of Anglesey, Wales, in the United Kingdom, and was equipped with the unusual Boulton-Paul Defiant single engine heavy fighter, equipped with a four gun turret.  Radar equipped, the Defiant was a more satisfactory night fighter than it had been a day fighter, but the turret was far less effective than had been hoped and the Defiant was quickly rendered obsolete.

Soon after, in Septmber 1941, the Squadron was re-equipped with the far more effective radar-equipped twin engine Bristol Beaufighter aircraft and was deployed in defence of British cities subjected to the German night bombing 'Blitz'.  Notably they had the MkII Beaufighter, atypically fitted with Rolls Royce Merlin engines;  the Beaufighter's more usual powerplant was the Bristol Hercules sleeve-valved radial engine.

The Squadron scored its first kill in January 1942 and throughout the rest of 1942, flew in defence of the UK against night raids by German bombers. In December 1942, the squadron was re-equipped with the fast and lethal de Havilland Mosquito fighters and began offensive "Ranger" missions over Europe attacking a variety of targets ground targets including German rail transport and rolling stock, and also mounted "Intruder" missions to attack German aircraft close to their airfields.

In March 1943, after a move to Middle Wallop, No. 456 Squadron was utilised in the night fighter and long-range day fighter roles again.  It also provided a detachment of aircraft to conduct fighter sweeps in support of aircraft mounting anti-submarine patrols in the Bay of Biscay.  German long range heavy fighters such as the Junkers 88 were a key threat to maritime patrol aircraft.  456 Squadron aircraft also escorted air–sea rescue vessels picking up downed airmen.

It continued in the fighter and 'Ranger' ground attack roles until the end of the European war.

In January 1944, it was deployed in defence of London following an increase in German bombing during which its crews accounted for 12 German aircraft, continuing in the air defence role until late February or early March when the squadron moved to RAF Ford.

During the Invasion of Normandy, the squadron shot down down 14 German aircraft in the process of providing air cover for Allied shipping. It was then switched to an air defence role against V-1 flying bombs, Mosquitoes being among the few aircraft fast enough to pursue and catch the small targets, shooting down 24 between June and August 1944.

In September 1944, No. 456 Squadron's aircraft supported British troops around Arnhem (Operation Market Garden, the operation made famous by the movie "A Bridge Too Far"), before concentrating their patrolling efforts over the Netherlands and Belgium.  A move to Church Fenton occurred at the end of the year, and the squadron began operating over Germany, escorting heavy bombers and attacking German airfields.  The unit's final wartime commander, Wing Commander Bas Howard, was killed in an accident on 29 May.

The squadron was disbanded on 15 June 1945 at RAF Bradwell Bay, Essex under the command of Squadron Leader Bob Cowper DFC and Bar, with most personnel being repatriated to Australia shortly afterwards.

The squadron lost a total of 29 personnel killed, of whom 23 were Australians,  456 Squadron crews were credited with shooting down 71 aircraft including 29 V-1 flying bombs.   The following decorations were awarded: one Distinguished Service Order, 10 Distinguished Flying Crosses, and one British Empire Medal.