No. 50 Squadron (RAF) From Defence to Attack 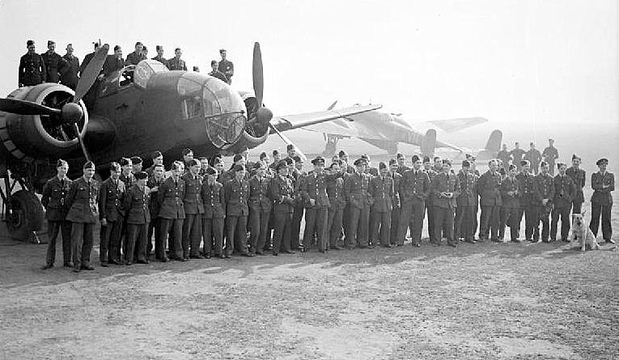 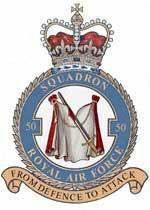 No. 50 Squadron RAF is included on this site as one of the many RAF Squadrons to which RAAF personnel were assigned and in which they served and died during WW2 under the Empire AirTraining Scheme.

No. 50 Squadron of the Royal Flying Corps founded at Dover on 15 May 1916. It was equipped with a mixture of aircraft in the home defence role, having flights based at various airfields around Kent.  By October 1918, it was operating Sopwith Camels as night fighters. It disbanded on 13 June 1919.  The last CO of the squadron before it disbanded was Major Arthur Harris later to become Air Officer Commanding-in-Chief of RAF Bomber Command during the Second World War.

No. 50 Squadron reformed at RAF Waddington on 3 May 1937, equipped with Hawker Hind biplane light bombers. It started to convert to the Handley Page Hampden monoplane medium bomber in December 1938 and was still equipped with Hampdens when the Second World War broke out, forming part of 5 Group, Bomber Command.  It flew its first bombing raid on 19 March 1940 against the seaplane base at Hörnum on the island of Sylt.

On 12 April 1940, in attempt to attack German warships off Kristiansand returning from the German invasion of Norway, 50 Squadron took part in what was the largest British air raid of the war so far, with a total of 83 RAF bombers attempting to attack the German fleet. When 12 Hampdens of 50 and 44 Squadron spotted a German warship and attempted to attack, they lost 6 of their number to beam attacks by German fighters.  With 13 officers and men from 50 Squadron dead or missing daylight attacks with Hampdens were abandoned.

50 Squadron continued operations by night, taking part in the RAF's strategic bombing offensive against the Germans through the remainder of 1940 and 1941. It re-equipped with Avro Manchesters from April 1942.

The Manchester was disappointing, however, with unreliable engines and had a lower ceiling than the Hampden it replaced.  Despite these problems, 50 Squadron continued in operations, contributing 17 Manchesters to Operation Milliennium the "1,000 bomber" raid against Cologne on 30/31 May 1942. It lost two aircraft that night, one of which piloted by Flying Officer Leslie Thomas Manser who was posthumously awarded the Victoria Cross for pressing on with the attack after his aircraft was heavily damaged, and when a crash became inevitable, sacrificing his own life by remaining at the controls to allow the rest of his crew to parachute to safety.

The squadron flew 7,135 sorties during the war with a loss of 176 aircraft.  It replaced its Lancasters with Avro Lincolns in 1946, disbanding at Waddington on 31 January 1951.

No 50 Squadron re-formed at RAF Binbrook on 15 August 1952, equipped with the English Electric Canberra light jet bomber. It moved to RAF Upwood in January 1956, disbanding on 1 October 1959.[1]

The squadron reformed again at RAF Waddington on 1 August 1962 equipped with the Avro Vulcan V bomber, using ex-617 Squadron aircraft made surplus after 617 Squadron re-equipped with Vulcan B.2s. It received Vulcan B.2s in December 1966, and was still operating them when the Falklands War broke out in April 1982, with two Vulcan crews from 50 Squadron selected for Operation Black Buck missions, bombing Port Stanley airfield in an epic round trip flight staging through the Azores.

The Falklands War, and the continuing need to maintain supply flights to the South Atlantic after the end of the war, resulted in a shortage of air-to-air refuelling tankers, and it was decided to convert six Vulcans to single point tankers, the first conversion flying on 18 June 1982 and entering service on 23 June. No. 50 Squadron was selected as the operator of the tankers, serving as the last unit to operate the Vulcan until disbanding on 31 March 1984.