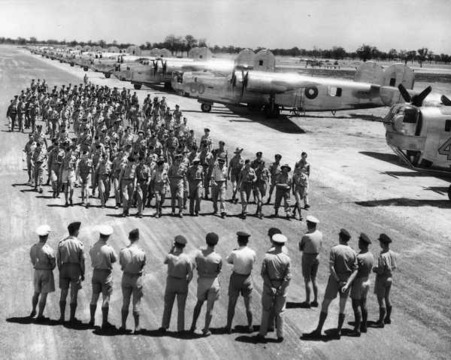 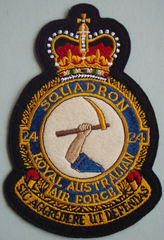 24 Squadron was formed at Amberley in Queensland on 17 June 1940 and moved to Townsville to carry out maritime, reconnaissance, and training duties equipped with Lockheed Hudson and CAC Wirraway aircraft.

Its WW2  history closely parallels that of No. 23 Squadron (RAAF).

Following Japan's entry into the war, in December 1941 the squadron moved to Rabaul, in an attempt to provide some aerial defence for New Britain and the surrounding islands.

On 20 January 1942 over one hundred Japanese aircraft attacked New Britain. 24 squadron tried to defend the island but its efforts were futile.

The squadron's eight Wirraways took-off to intercept the raiders but were immediately attacked by a large force of Mitsubishi Zeros. The Wirraways were no match for the Zeros. Within seven minutes, three Wirraways were shot down, two crash-landed, and another was damaged. The squadron only had two Wirraways and a Hudson left. It's sick and wounded were evacuated the next day on the remaining aircraft, while the rest of the personnel had to trek through the jungle on foot until they were rescued by Empire flying boats.  HOwever some pesonnel were, like most of the Garrison of Raboaul,  captured by the Japanese.  Many of these men were murdered by the Japanese in a succession of massacres and others were aboard the Montevideo Maru POW ship when it was torpedoed and sunk by a US submarine in July 1942.

In July 1942 the squadron moved to Bankstown, where they became part of Sydney's air and maritime defence. It flew a number of aircraft, including Bell Airacobras, Brewster Buffalos, and then Vultee Vengeance dive bombers.

In August 1943 the squadron returned to New Guinea. Flying Vultee Vengeance dive bombers, from the airstrip at Tisli Tisli, near Nadzab, the squadron undertook missions supporting the army's operations, bombing Finschhafen, Madang, and Shaggy Ridge. The squadron also supported the American landings at Cape Gloster. It returned to Australia in March 1944.

Posted to Lowood in Queensland in June 1944, No. 24 Squadron became one of the first squadrons to be re-equipped with the Consolidated Liberator, a heavy bomber. They then moved to the Northern Territory, first to Manbulloo and then, in September, to Fenton. At Fenton the squadron became part of 82 (Heavy Bomber) Wing and conducted bombing raids against targets in the Netherlands East Indies. Between January and April 1945 attacks were made on power stations in east Java, an enemy convoy near Koepang, and troop concentrations at Tawao. A detachment of aircraft was also sent to Morotai to assist in raids on Labuan, Tanamon, Borneo, and islands in the Netherlands East Indies.

In May 1945 the wing moved to Morotai where it intensified its bombing raids against Borneo and the Indies.

With the cessation of hostilities in August and the end of the Second World War, the squadron flew numerous transport missions, returning former prisoners of war and troops back to Australia. The squadron returned to Tocumwal in New South Wales in December and was disbanded there in May 1946.