The Centenary of the famous Light Horse charge at Beersheba in Palestine in 1917 marks one of the most famous battles involving Australian troops in WW1.

"At a mile distant their thousand hooves were stuttering thunder, coming at a rate that frightened a man - they were an awe inspiring sight, galloping through the red haze - knee to knee and horse to horse - the dying sun glinting on bayonet points….”

The story of the Charge is well known and has been depicted in movies such as ‘Forty Thousand Horsemen’ and more recently ‘The Light Horsemen’.  The improbable, all-or-nothing gamble resulted in the Light Horse securing the valuable wells at Beersheba, and the southern flanks of the British advance through Palestine, culminating the Second Battle of Gaza and opening the way for the advance on Jerusalem.

Rather than recounting the circumstances of the charge which you can find elsewhere on this site (https://rslvirtualwarmemorial.org.au/explore/campaigns/72), we thought we might tell the story of just one soldier who played his part in the Battle, although not in the charge itself, and who was wounded and decorated in the process.  His story says a lot about the perhaps surprising diversity of the men who made up the AIF 100 years ago, itself a reflection of the community from whence they were drawn.

One of the soldiers in that Machine Gun Squadron was Trooper ‘Bertie’ South.  Bertie, or to use his given names. Albert Carl, was not the man he was when he enlisted as an 18 year old, in the euphoria surrounding the declaration of war in August 1914.  His birth name, and the name recorded on the Embarkation Roll of October 1914 was in fact ‘Schmelzkopf’;  he came from one of the very many families of German descent who had made their home in South Australia. 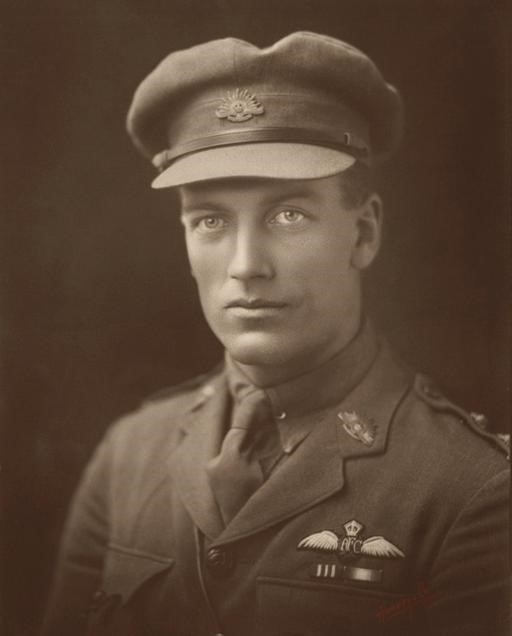 Joining the 3rd Light Horse and with a Serial number of 46, Bertie was one of the first to enlist.  By May 1915 he was at Gallipoli, fighting in the scrub covered ravines with his comrades of the 3rd Light Horse who were deployed as Infantry, to help the ANZACs retain their foothold on the Gallipoli Peninsula.  Later, following the withdrawal of the ANZACs to Egypt and the despatch of the AIF to the Western Front, Bertie and his comrades were re-united with their faithful [SL1] ‘Walers’ and prepared for the coming campaign against the Turks in Egypt and later Palestine.

In mid 1916 he was transferred to the Machine Gun Squadron of the 1st Light Horse Brigade, as these units were formed by amalgamating the section in each Regiment.

Not long afterwards, Bertie received some news from Army Headquarters.  His parents had changed their family name by Deed Poll, and because Bertie was under 21 years old, his name was to be automatically changed too.  So he became Bertie South.  Presumably feeling the effects of discrimination and enmity towards anything ‘German’ that had arisen since the outbreak of war, his parents adopted an English-sounding name, which automatically applied to Bertie in far-off Palestine.  Whether he had felt any of the social stigma that his parents presumably had is not known.  There were plenty of young men of German descent scattered through the AIF particularly in the South Australian Battalions and Regiments.  Either way he was issued with a new paybook and thereafter adopted his new name.

By October 1917 the Machine Gun section of the 3rd Light Horse Regiment had been amalgamated to form a Squadron under the command of 1st Light Horse Brigade Headquarters.  The 2nd Battle for Gaza was underway.  On the 31st October, the Light Horse overlooked Beersheba.  The scene was set. 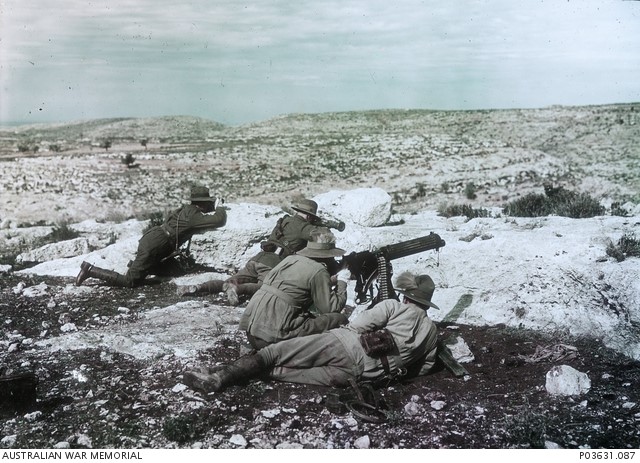 During the course of the Battle that unfolded around Beersheba, Bertie South distinguished himself.  He was recommended for a Distinguished Conduct Medal and ultimately awarded a Military Medal for his actions (see link), having carried ammunition for his gun team across 400 yards under heavy fire and despite being severely wounded in the face.

He was admitted to hospital, after being shot through the side of his face and mouth on 31st October 1917 at Beersheba.  The bullet entered the right side of his mouth and carrying away a number of teeth and exited the left side of his face, which left him scarred.  He was discharged after dental treatment but then had a continuing problem with septicaemia, remembering there were no antibiotics to speak of at that time.  Disinfection of what had become a septic wound finally occurred in late November. 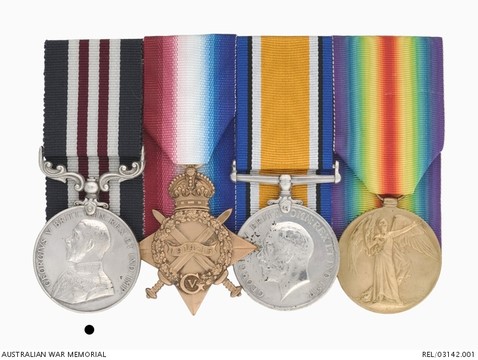 Bert later applied for a transfer to the Australian Flying Corps in early 1918.  He successfully graduated as a pilot and was commissioned as a Second Lieutenant but having completed his training just after the cessation of hostilities (which in the Middle East took place in late October 1918) he did not see any operational combat flying.

Post war he joined the RSL briefly but his membership lapsed after only a year.  His last address was given as Cadell in 1920. (7)  His Commission Certificate was addressed c/- Holders at Waikerie.  We have found several informative obituaries which help to fill in the brief period he lived beyond the Great War (see links on left of this page).  He had been a leading light in the community in the Riverland, being a notable sportsman.  He must have been a very eligible bachelor as well.  All of that was to be to no avail though; he died in Keswick Barracks Hospital after his health broke down, aged just 26, on 23 September, 1923.

He is buried in the AIF Cemetery at West Terrace in Adelaide and is commemorated on the Rose Park Memorial to the Fallen.  See the link to his person page https://rslvirtualwarmemorial.org.au/explore/people/232846