The Campaign in Dutch Timor and Sparrow Force - Daniel Minchin

23 February is the anniversary of the surrender in 1942 of the main part of the Australian Sparrow Force.  Sparrow Force was sent to defend Dutch Timor (now West Timor in Indonesia), particularly Penfui airfield. 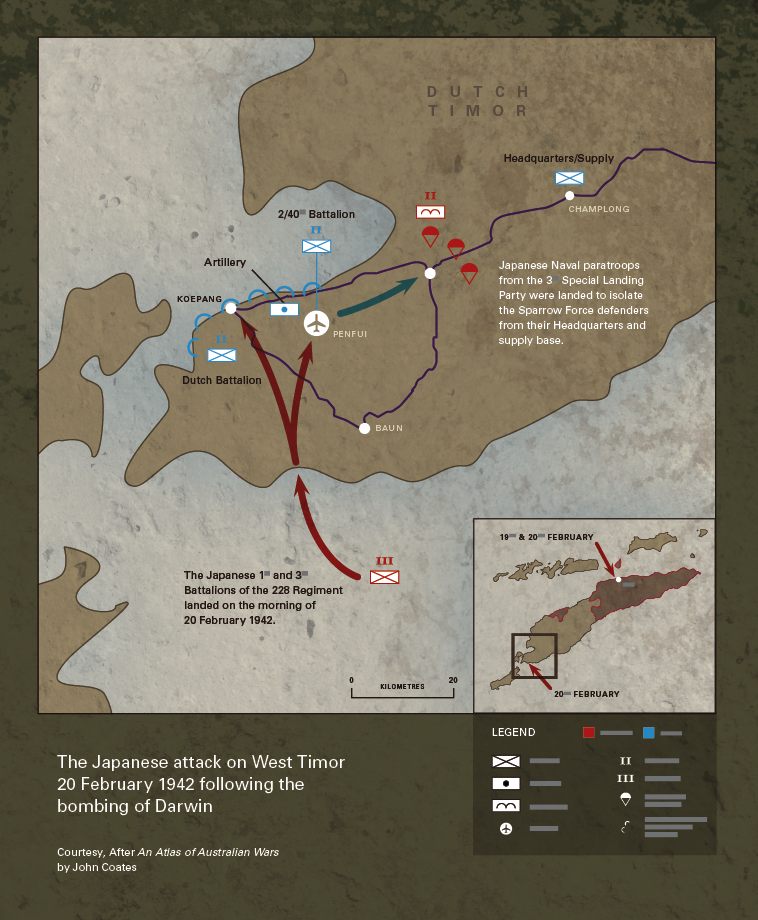 Sparrow Force arrived in Dutch Timor on 12 December 1941, totalling approximately 1400 men.  Its chief component was the 2/40th Infantry Battalion, a mainly Tasmanian unit commanded by Lieutenant-Colonel William Leggatt, who was also the Force commander.  Other smaller units were included in the Force.  The next largest unit was the 2/2nd Independent Company, which was sent to Portuguese Timor (now East Timor), along with Netherlands East Indies troops from Dutch Timor, within a few days of Sparrow Force’s arrival. Sparrow Force in Dutch Timor had its numbers increased by a further 218 men who arrive in January.

Like his counterpart in command of Gull Force on Ambon, Lieutenant-Colonel Len Roach, Leggatt had concerns about his force’s situation, and requested additional equipment, including field artillery.  Roach came to Timor in January 1942, on his way back to Australia after being replaced as Gull Force commander, and he and Leggatt “fully agreed that the forces for the defence of both Ambon and Timor were inadequate”[1].

Timor was subject to air raids before the Japanese landings.  A British anti-aircraft battery arrived in Dutch Timor on 16 February.  However, a convoy containing reinforcements for Timor was attacked by Japanese aircraft on that day and ordered to return to Darwin.  Given the planned expansion of Sparrow Force, Brigadier William Veale was appointed to command the Force, arriving in Dutch Timor on 12 February.

On the night of 19/20 February 1942, the first air raid on Darwin having occurred earlier on the 19th, the Japanese landed in both the Dutch and Portuguese parts of Timor.  The invasion force included paratroopers.

Sparrow Force in Dutch Timor fought hard, although hampered by a lack of effective communications and being outnumbered, they captured the villages of Babau and Usau from the Japanese.  Peter Henning refers to Sparrow Force killing “more than 600 enemy troops in the three days of action from 20 to late 22 February”[2].  Veale and his headquarters were located away from the main body of the force during the campaign, with Leggatt commanding the Force in action. 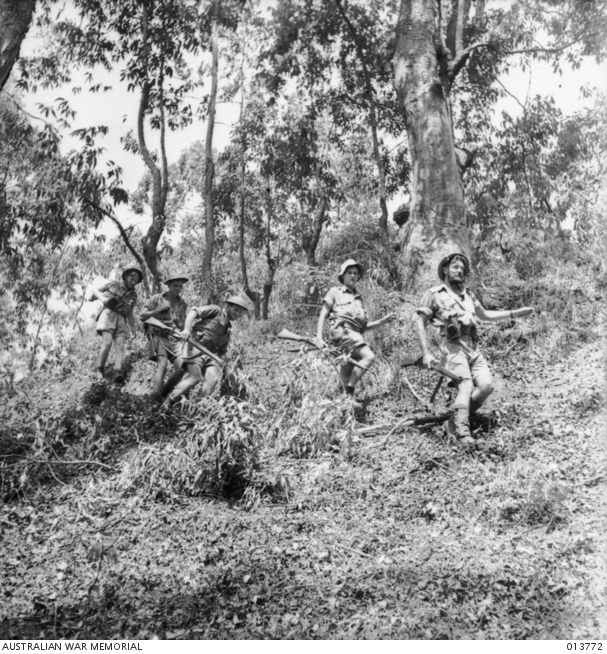 On the morning of 23 February 1942, the main body of Sparrow Force was at Airkom, preparing to move towards Champlong, when a Japanese convoy came up to the rear of the force.  The Japanese commander said that if there was no surrender by 10 a.m., the Australians would be bombed continuously.  Sparrow Force surrendered before that time, however, Australian and Japanese troops were bombed by Japanese aircraft in two attacks after the surrender. More Australian troops surrendered or were captured after the main surrender at Airkom, some after a considerable period, with approximately 1100 Australians of Sparrow Force in total becoming prisoners.

Over 200 Australians in Dutch Timor, including Veale, avoided capture and reached Portuguese Timor, where the 2/2nd Independent company was still operational.  The 2/2nd fought the Japanese on Timor until the unit was withdrawn at the end of 1942.

Sparrow Force personnel were initially held in captivity on Dutch Timor, until later in 1942 when they were moved to Java.  While some men spent the rest of the war on Java, the majority were moved onto a number of locations as POWs, including Sumatra, Singapore, Thailand and Japan. Approximately 340 members of Sparrow Force did not survive the war, including deaths in action and captivity.

We pay tribute to the men of Sparrow Force.