Anstey Hill is a small topographic feature about 18 kilometres north-east of Adelaide on the western edge of the south Mount Lofty Ranges near the southern boundary of the Anstey Hill Recreation Park, named for an early pioneering family in the area.

SA’s Mortlock Library military records attest to the fact that a Lieutenant Edgar Oliphant Anstey was the first native-born South Australian to die in battle as a soldier, as far as can be determined.  He died at the Battle of Isandlwana in Natal, South Africa on 22 January 1879.(1) 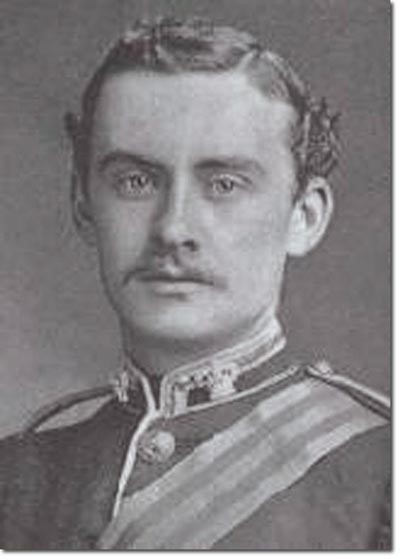 Edgar was the third son of George Alexander Anstey and had been born at Highercombe on 18th March 1851. His father had made a name for himself as a pastoralist in the area.

George had been born in London in 1814, and emigrated from the United Kingdom in 1823 to Tasmania.  George married in 1838 aged 24 and then relocated to the fledgling Colony of South Australia, where he established a property at Highercombe.  By 1841 he was one of the colony’s leading pastoralist and horticulturalist.

Ten years later Edgar was born.  While Edgar Anstey was South Australian born, he did not reside there or indeed in Australia for very long.  His life’s footprint was however to span a very large area indeed.  On the death of his father later in 1851, George moved his family including young Edgar, back to Tasmania.  In 1854, they returned to England.  George did not return to South Australia other than on brief visits, the last in 1868.

Edgar grew up in Surrey, England.  He attended the Royal Military Academy, Sandhurst, graduating in 1873.  By January 1879, he was serving with the 1st Battalion, 24th Regiment of Foot in the British Army, the South Wales Borderers, which had been assigned to South Africa.  It was an experienced, well drilled regiment and boasted many excellent rifle shots, veterans of previous fighting in the Cape Colony.

An Unnecessary and Damaging Conflict

In late January the ‘24th of Foot’, as part of a larger force, began a controversial advance into Zululand in Natal Province as part of an ill-conceived and un-necessary act of intimidation and provocation instigated by the Governor, Sir Bartle Frere, (readers may note the fact that the highest mountain in Queensland is named after him) and the military commander, Frederic Thesiger, Lord Chelmsford.  This effort was undertaken without any authority from London (2).  Both men were to wear the consequences in due course.

Worse, its consequencess were to be far reaching an immensely destructive for Zulu society.  Bartle Frere and Chelmsford antagonised a potential ally of the British, breaching previous agreements reached with the Zulu King Cetshwayo.

Chelmsford encamped his column at the foot of a prominent landmark known as Isandlwana.  They had earlier dropped off a rifle company and a few engineers and supply personnel at a river crossing and supply depot on the Buffalo River, named Rorke’s Drift.  Chelmsford departed with a strong scouting force to try to locate the Zulu forces, leaving his supply train and a large force to provide security. 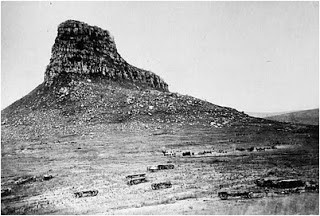 Isandlwana shortly after the battle showing abandoned wagons, 21 May 1879.  Had they been rolled nose to tail, in the classic ‘circle the wagons’ posture from behind which the British soldiers might have fought, the result might have been different, http://thinredlinemod.blogspot.com.au/p/about.html.

What happened next became the worst defeat suffered by the British Army up to that time, to be transcended only by the horrors of the Somme in 1916.

Early in the morning, mounted security picquets or vedettes sent out from Isandlwana, ‘bumped’ into an estimated 25,000 Zulu warriors just to the north of the British position.  The Zulus, who knew exactly where the British were, had intended to rest up knowing that a solar eclipse was due to take place that day – a very bad omen (3).  However their premature discovery caused them to spring into action and they pursued the cavalry vedette that had discovered them back to Isandlwana to fight the battle earlier than they had intended.

The British defenders had not ‘circled the wagons’ in the time honoured manner, and indeed in compliance with Chelmsfords own 'Standard Operating Procedure' which he himself ignored, and were caught off guard by the appearance of the Zulu ‘impis’ (fighting formations).  However, disquieted as they were, they did not panic.  The local commander, Colonel Pulleine, deployed the standard ‘thin red line’ of British infantry which pushed forward from the position and supported by an artillery battery, checked the Zulu advance with withering and accurate rifle fire.  Driver Elias Tucker, a survivor, noted that the 24th’s volleys ‘cut roads through them (Zulus)’.  The Zulus had rifles of their own and began to use them on the British soldiers.

British troops at the time carried a ‘first line’ on their person of 70 rounds of ammunition.  In previous battles they had not exhausted their ‘first line’ in South Africa.  At Isandlwana with so many enemy arraigned to their front, and despite the devastating effect of the big Martini Henry bullets, the Zulus kept coming and 70 rounds proved to be not enough. (4)

The British now had to race ammunition forward to the firing line.  In the face of weight of numbers the firing line began to withdraw initially in good order but then, moving through broken ground, the line began to crumble as the Zulus began to outflank the now disjointed withdrawal of the forward firing lines of ‘redcoats’. 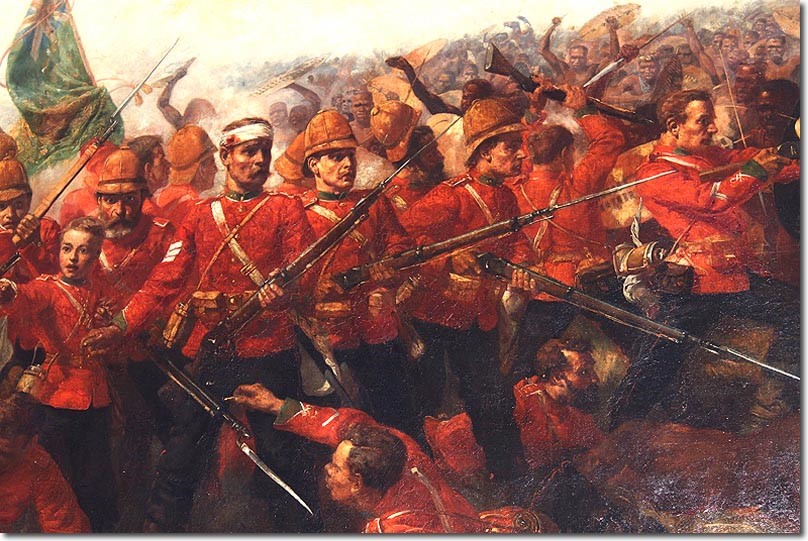 Detail from Charles Fripp’s painting of the last stand of the 24th at Isandlwana.  The men are formed into a small square as can be seen by the fact that those at the back are facing the other way to defend themselves against the horde of Zulus surrounding them. The man lying down in front is handing his ammunition to those still able to shoot. The artist has placed an angelic-looking drummer-boy next to the sergeant to add even more pathos to the scene. He points at something, but it cannot be anything new to the men around him. Everywhere they look they are staring death in the face.  http://www.britishempire.co.uk/forces/armyunits/britishinfantry/24thfootisandhlwana.htm

From the forward slopes and across the saddle of the brooding pinnacle of Isandlwana, the British remnants attempted to conduct a fighting withdrawal down what is now known as Fugitive’s Drift towards the river.

Hand to hand fighting ensued as groups of redcoats were cut off and surrounded.   The British certainly knew how to use their bayonets but now the Zulus’ numbers and their short stabbing spears, the famed assegais, made the outcome inevitable, but the infantrymen who stayed in formation with their comrades, died hard.

A Zulu account related how “It was a long time before they were overcome, before we finished them.  When we did get to them, they all died in one place, together.  They threw down their guns when their ammunition was done, and then commenced with their pistols which they used as long as their ammunition lasted; and then they formed a line shoulder to shoulder and back to back and fought with their knives”. (5)

In the midst of this chaos the solar eclipse took place, surely compounding the sense of looming Armageddon, which must have swept the British.

The net result was 25,000 Zulu warriors overwhelmed and slaughtered 1,357 soldiers of the Queen, mainly from the 24th Regiment and the Natal Native Contingent. Very few escaped to tell the tale.

Edgar Anstey died with a group of about 60 of his men from F Company of the 24th, having withdrawn in good order down Fugitive’s Drift to the bank of the river, conducting an organised, heroic but futile last stand so familiar to Victorian audiences of the time. The Zulus were not taking prisoners.  A small cairn of whitewashed stones marks the site to this day.

Lord Chelmsford and his scouting force returned that evening and had to bivouac among the shattered remnants of his column. The scene must have reminded some of Dante’s Inferno.   The gloom of the eclipse had given way to a gathering dusk.  Bodies of the men and hundreds of animals littered the ransacked camp, the smell of death, spilled blood and smouldering fires blew in the breeze, along with the papers and effects of dead men.  The brooding mass of Isandlwana hill loomed as the backdrop to this apocalyptic scene.

The Zulus had disembowelled the dead in a traditional gesture to release the spirits of the dead and to prevent the corpses from bloating in the sun, a fate they feared would befall them if they did not carry out the gruesome ritual.  Many of the corpses had been stripped of their uniforms and boots and the prized rifles carried away by the victorious Zulus. To the British soldiers walking amongst the remains of their comrades, it must have looked like the hounds of hell had been unleashed.

Thouands of Zulu dead lay on the field and many more of the wounded would join them in the coming days as the terrible wound inflicted by the big Martini Henry bullets took their continuing toll.

The Anglo-Zulu War was prosecuted to its conclusion by July.  Burial details later scoured the battlefield and Edgar’s remains were located in this process by his brother in September.  He had apparently not been mutilated but that was small comfort.

Later, alone among all of the dead that day, his remains were repatriated to England where they were interred in the grounds of the family’s church in Woking, Surrey.  The grave marker was recently restored as it had fallen in to disrepair.

The tranquillity of Edgar’s birthplace at Anstey’s Hill in South Australia matches that of his last resting place, St John’s churchyard at Woking in Surrey.  Both belie the circumstances that surrounded the fate of this one young man a long time ago at a place half a world away. 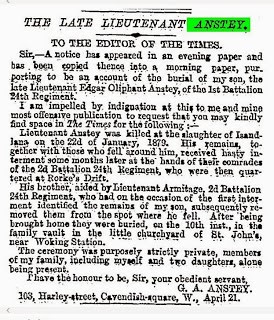 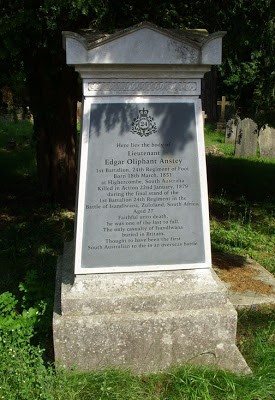 Newspaper clipping from an unidentified source describing the restoration of Edgar Anstey’s grave in Woking, Surrey

The right wing of the Zulu formation had not been heavily engaged at Isandlwana and they had run on, arriving at the supply depot at Rorke’s Drift late in the afternoon.  They promptly attacked it, but the 150 or so British soldiers there had developed the site into a well-prepared defensive position.  In an epic defence they held off thousands of Zulu warriors, winning no less than eleven Victoria Crosses in the process. The awards were likely made in part at least to obscure the catastrophe that had taken place a few kilometres away.

Chelmsford’s column reached Rorke’s Drift early next morning and were surprised and relieved to see that it had held.  It provided the only bright spot in an otherwise disastrous string of events, and many an historian has claimed that Rorke's Drift was lauded a a cover up.

The Rorke’s Drift action was immortalised in the 1964 movie ‘Zulu’, starring Michael Caine.  Isandlwana was the subject of a later movie ‘Zulu Dawn’ in 1979 starring Peter O’Toole as Lord Chelmsford.  The two together provide a good account of the two battles.