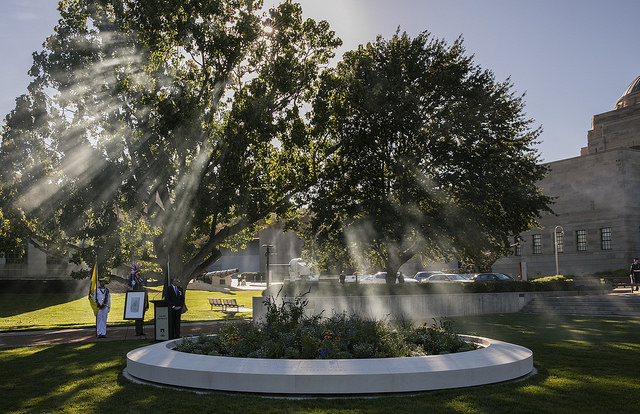 The Flanders Memorial Garden, the product of a partnership between Australia and Belgium intended to honour more than13,000 Australians who are buried, or commerated in Flanders, was opened 4 April 2017. The garden was filled with soil from a number of significant sites in Flanders Fields, Belgium, including Tyne Cot Cemetary, Menin Gate ramparts, Polygon Wood, Toronto Avenue Cemetery and Hill 60. The Australian soil, the collection of which was coordinated by the state branches of the RSL, was taken from sites in each state and territory with significant military ties to World War One. The RSL Virtual War Memorial supported this project by researching appropriate sites to represent South Australia and the Northern Territory.

At the dedication, the Governor-General described the significance of Flanders Fields to Australia.

“Australian men interred in dug-outs, trapped under duckboards, crushed by shell-fire; soldiers, cursing the mud with every fibre of their being.” Flanders, he said, was “always a sombre and sacred place … of carnage and courage, of desperate sacrifice and stoic endurance – (is) now a beautiful place.”[1]

The garden created at the Australian War Memorial in honour of the men who lie in Flanders Fields aims to do justice, both to their sacrifice then and to the beauty of the fields as they are now.

Read more about the dedication here or view the entire ceremony.