From Prisoner to Guard: The Life and Service of Leslie Walter Parish 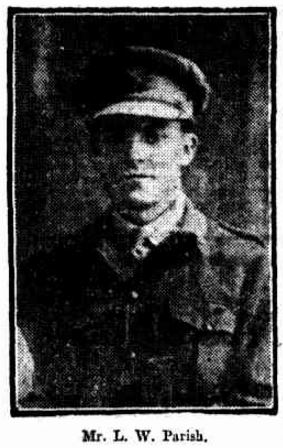 Born in Wallaroo on 11 November 1892, Leslie Parish was working as a storekeeper in Kadina when war was declared in 1914. In September of the following year, he enlisted at the age of 23 years and 10 months. He trained with the 1st Depot Battalion at Morphettville, before being assigned to the 32nd Australian Infantry Battalion in December 1915. He had been serving with B Company in France for three months by July 1916.

On the 19th of July, B Company, along with D Company left their billets at Fleurbaix at 2pm and took up their positions in the trenches in preparation for the attack, which would become infamous in Australian military history as the Battle of Fromelles. At 5.45pm the two companies moved into position in the front line. The first wave went over the parapet 8 minutes later. B and D Company made up the 3rd and 4th waves, which begun their attacks at 6pm. At 4am the following morning, a reinforced German Army attacked on the left flank and forced their way through the firing line. The Battalion withdrew at 7.30 on the morning of the 20th having sustained significant casualties across all ranks.[1]

Leslie Walter Parish, numbered among the 214 missing, was captured unwounded by the German Army at Laventie, 14 kilometres north-west of Fromelles on 20 July 1916. He was initially imprisoned in the Dulmen prison camp, south-west of Münster, from which he wrote to his mother asking her to “please send big substantial parcel”. Whether the parcel reached him is unknown; by the time the letter to his mother had been published in the Eyre’s Peninsula Tribune, 22 September of 1916, Parish had been transferred to the Schneidemühl prison camp north of Posen, in present-day Poland.[2] 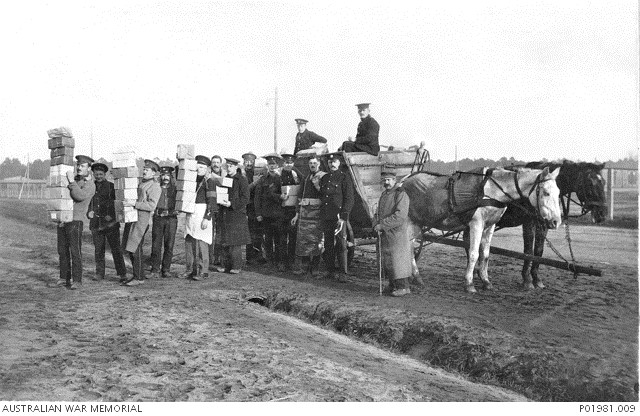 Informal portrait of Prisoners of War (POW) unloading parcels from a horse-drawn cart at the Schneidemühl POW camp, north of Posen. Photograph was sent to the Australian Red Cross by 3235 Corporal (Cpl) James Skelly, 55th Battalion, from Rockdale NSW who, like Parish, had been captured at Laventie on 20 July 1916. Australian War Memorial P01981.009.

Although he spent the remainder of the war in captivity, the German POW camps in the First World War there were worse places to be during wartime. Prisoners reported being treated well, although they often requested of their families money or items that they needed to participate in the prison economy to obtain essential, and desirable, items.  For some, the worst aspect of life as a POW was the monotony.[3]

Leslie Parish was repatriated to London on 4 December 1918 and returned to Australia in 1919, opening a store in Kimba which, six years later, was reported as flourishing.[4] In 1929, he changed from business to the prison service, beginning as a probationary guard at Yatala Labour Prison on a daily wage of 10 shillings and one pence with a raise of sixpence a day after 12 months of service.[5] As one might imagine, Parish’s new role was not always an easy one. In an inquiry into the conditions of prison guards, Parish gave evidence that guards had, on occasions, been assaulted by prisoners using implements.[6]

A little over a year later, Parish again changed occupations, leaving the prison service to start a painting and decorating service in Malvern. Unfortunately he featured in the papers again, appearing before court having filed for bankruptcy in July 1938.[7] The issue was finally resolved in December 1951 with the approval of his application for composition, which would allow Parish to retain his assets on the condition that he paid his creditors.[8] Leslie Walter Parish passed away in 1960 at the age of 67.