This battle was in effect the culminating point of the evolution of the Australian Corps from the rag tag militia which had stormed ashore at Gallipoli four years earlier, to a seasoned, well-trained professionally led force that had carried all before it since August 8th at the Battle of Amiens.

Described as "…the greatest military achievement of the war", by General Sir Henry Rawlinson, the British Commander of  the Fourth Army to which General Sir John Monash's Australian Corps belonged, this battle more than any other exemplifies the level of capability the Australians had achieved by this late stage of the war.

In complete contrast to the static and attritional nature of trench warfare, this battle was an exemplary application of manoeuvre and battle craft at platoon and company level, executed against a well sited enemy position complemented by several major terrain obstacles; namely the Somme River and the line of the Canal du Nord, which at that stage had been largely constructed but critically, not filled with water.

The Australian Corps had advanced from the vicinity of Villers Bretonneaux and Le Hamel on the 8th August.  They had advanced on the southern side of the Somme and approached the great elbow in the river at the apex of which was the town of Peronne dominated by the heights of Mont St Quentin to the north west.  Monash had gained approval to put the 3rd Division on the northern side of the river to protect his open flank as the British III Corps advance had diverged toward Bapaume.

The senior Commander's (Rawlinson) intent had been to hold short of the formidable defences of the Mont, and to allow the British III Corps and adjacent formations to catch up and carry on the approach to the Hindenburg Line.  Monash was chaffing at this approach.  He believed the AIF needed to make an indellible mark so that it played a key role in any post war negotiations, but he was running out of time and the troops in numbers needed to do it.

Monash was also under political pressure from Prime Minister Hughes.  Hughes was trying to play a populist line with the Australian public, by pulling  troops  out of the line and sending home all the surviving 1914/15 veterans.  With reinforcements having slowed to a trickle, and no prospect of conscription to boost the flow of reinforcements, Monash's Corps was under strength by as much as 50%, and close to exhaustion, with no let-up since August the 8th.  The Australian Corps was looking at the need to disband one Battalion in each Brigade in order to condolidate available troops into viable units and sub-units.  Additional troop withdrawals would only make this equation worse.

At the same time he (Hughes) wanted Australian battlefield achievements to stake his place at the post-war negotiating table.

Monash could not do both.  His capacity to make the mark he sought and his Prime Minister so desperately wanted, was being eroded with every new demand made by Hughes to appease electors at home.  Monash was between the proverbial rock and a hard place.

He was about to play a very high risk game.

To break the dilemma he planned to attack and capture Mont St Quentin essentially off the line of march and do so before any troops were withdrawn.

Without the benefit of tanks and with much of the artillery having been re-allocated further north, he framed his plan.

The 3rd Division was already in the north bank of the Somme.  It was tasked to protect the open left flank of the impending attack by moving to clear the Bouchavesnes spur thus securing the Corps' open (northern) flank.

The 5th Division was to hold the southern bank and then push a force across the Somme canal and river in order to mount an attack to clear Peronne.  The holding force on the south bank, the 15th Brigade led by the redoubtable Brigadier Pompey Elliot, was to then cross the river directly into Peronne.

Monash briefed his plan to a sceptical Rawlinson who, under considerable pressure from Monash, and very aware that his subordinate had thus far achieved everything he set out to do, relented and let Monash proceed to execution.  The die was cast.

Dominant feature - Mont St Quentin,  3 km from Peronne to the south, 9 km from Feuillaucourt Bridge to the west where the main body of troops crossed the river.  The town of Peronne itself.  The Somme river and the parallel Somme Canal were significant obstacles.  The line of the Canal du Nord, excavated but not filled with water was also a key feature.

Location of Enemy Troops (at the start of the battle): The enemy occupied a series of trench systems including Gottlieb trench on the shoulder of the hill, and ‘Brasso’ redoubt on the slopes to the west. Trenchlines contoured the slopes and ran down across the flats to the Somme.  'Elsa'   trench lay along the line of the Feuillacourt road.  Mont St Quentin was the dominating feature on the whole German Line and Ludendorf had sent the 2nd Prussian Guards Division to hold the Mont “to the death”.

Location or direction of approach of Australian troops (at the start of the battle): 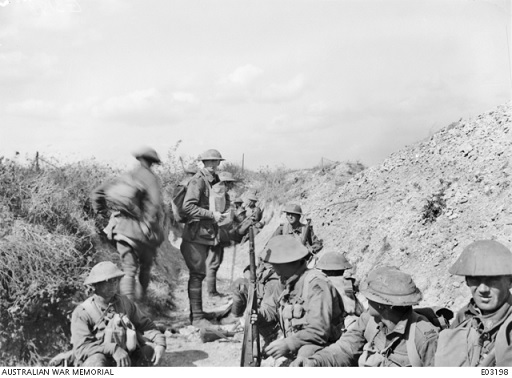 Captain James Sullivan MC and Bar MM, Officer Commanding A Company, 21st Battalion, in Elsa Trench with some of his men, immediately before going out to participate in the attack on Mont St Quentin, at 1.30 pm, on 1 September 1918. It was with this renewed assault that the enemy resistance was broken and the whole position of Mont St Quentin won.  Capt Sullivan was killed in the final AIF attack of the war at Montbehain four weeks later. 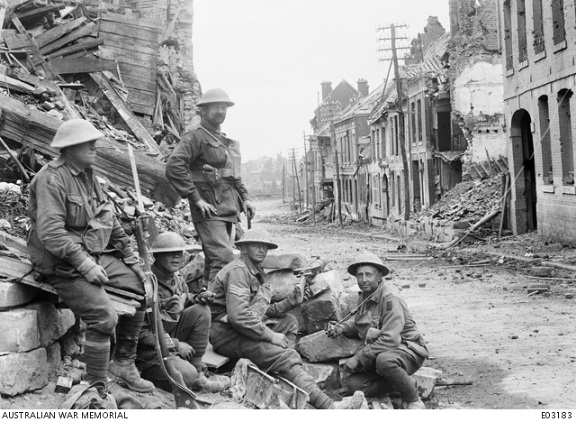 Soldiers from a machine-gun position established in the fighting in the ruins of Péronne, photographed on 2 September 1918." AWME03183 An Australian Lewis gun detachment cover a street in Peronne after the 5th Division captured it on 2/3 September 1918. Two of the men appear to be holding Mills bomb grenades.

This battle represented the culminating point of the Australian Corps on the Western Front.  A deliberate Corps attack, it was executed with amazing speed and alacrity.  The Battle procedure involved to adjust the initial plan and then to manouevre the three key Divisions into position across a major terrain obstacle and in the final stages under observation and fire from the enemy is an undertaking of a scale that the Australian Army has not done before or  since.

Some commentators appear determined to be-little the achievement or undermine Monash, have made various observations that are trite and fail to grasp the complexity of the operation.  Some have declared that the German Army was in effect collapsing at this point,  overlook the fact that it was still operating effectively along the line of the Front and inflicting grievous casualties on the advancing Allies.  The AMericans for example sustained 53,000 killed in little more than six months in this last phase of the war.

The AIF itself was nearing the point of exhaustion.  Grossly under strengh and well under the 3:1 ratio of attackers to defenders that normally predicate success in attack, they still managed to wrest control of the objective from the enemy with no tanks or the level of artillery support they had enjoyed in early August.

Some criticise Monash for not 'directing the attacks' of the Brigades and Battalions.  He was the Corps Commander and once battle had been joined his capacity to influence the outcome other than by positiong resources to afford the best chance of success, his role at 'the sharp end was necessarily limited by the fact that he had three Divisions in close contact with the enemy.  The fighting was conducted at Platoon and Company level and the gains were hard won.  As always, audacious and determined action by a few individuals often inspired their comrades at critical times.

The fact that the 5th Brigade was forced off the Mont on the first day by German counter-attacks, or the fact that the 6th Brigade needed two attempts to wrest the objective from the enemy do not signify failure or demean the level of accomplishment as is inferrred by some.  Rather it exemplfies the depth in attack they were able to generate, and the focus on achieveing their aim that they adhered to doggedly, despite low numbers and further casualties.  Further, the determination with which it was carried was eblematic of what determined, experienced, well trained, well led and highly motivated troops can achieve.  Resilience was, as was so often the case, exemplified by the capacity of privates and Corporals to step up and assume tactical conmmand when more senior leaders became casualties.  This in an Army that had been rank amateurs just four years previously when landed on Gallioli's fatal shore.  They had evolved into an outstanding professional organisation at every level, demonstrating great tactical flair, initiative and determination.

Experienced soldiers and leaders,  when familiarised with the detail of this battle, are generally in awe of the men at all levels who delivered this result.  And so they should be.

It came at a cost though, and the AIF's capacity to continue was being run down.  Just one month later it would fight its last battle, having breached the Hindenburg Line, at Montbrehain, so closing a tract of history that made an enduring indelible mark on Australian society and its national identity.

In recent years it has been established that many of the remarkable images by originally unatributed photographers, were in fact captured by the redoubtable Captain (later Sir) Hubert Wilkins MC*.

This battle formed the basis of the very popular dioramas that became a feature of the Australian War Memorial.  Execured by Charles Webb-Gilbert, he was also responsible for a number of public sculptures including the somewaht controversial 2 Division Memoriaol, depicting a hatless Australian soldier bayonetting the German eagle (removed and destroyed by the invading Germans in 1940) "the bomber" in Broken Hill, and the Rose Park Memorial in Adelaide.  The twice life size figure of the latter is derived from one that features in the Mont St Quentin diorama at the AWM.

Based on original work by an esteemed colleague, the late Lieutenant Colonel Peter Morrissey