Up until very recently Queen Victoria was Great Britain’s longest standing monarch in terms of tenure actually on the throne. The current Queen, Elizabeth the Second, now holds that record. Victoria was a complex and fascinating person, well worthy of study in her own right, but for military historians one of the quirks of her reign was that it ended, with her death, while Britain, and many Empire units as well, were involved in the complex and misunderstood second Boer War.

The Army Museum of South Australia (AMOSA) has pushed hard in recent years to get this conflict better represented in our galleries and, by extension, in the community at large, ably assisted by the South Australian Boer War Association (SABWA) with whom we work closely. The medals associated with that war are of particular interest to us here in AMOSA and SABWA as well as, no doubt, to numismatists at large in the community. For the medal historians of the ‘modern’ generation it tends to be the Boer War where these studies begin, usually expanding through to the World Wars which were, of course, conducted on a far greater scale.

One of the most commonly discovered, owned, or inherited medals is the Queen’s South Africa Medal or QSA, the queen in question being, of course, Victoria herself. Her death in 1901, however, predated the end of the Boer War and her successor, Edward VII, duly gave his name to the other major medal of the war: The King’s South Africa Medal. They are both very distinctive and easy to recognise medals with clear, striking colours of, respectively, navy, red and yellow and green, white and orange. See below, with the QSA to the left: 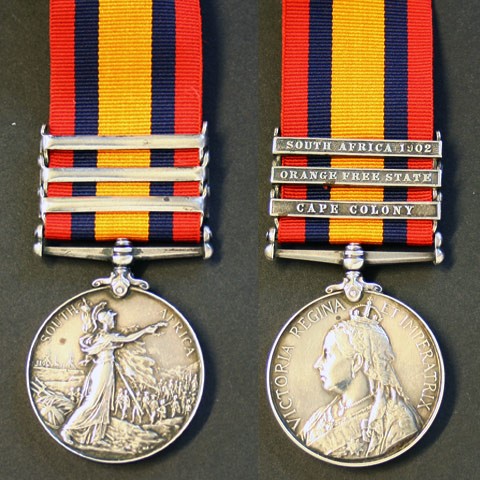 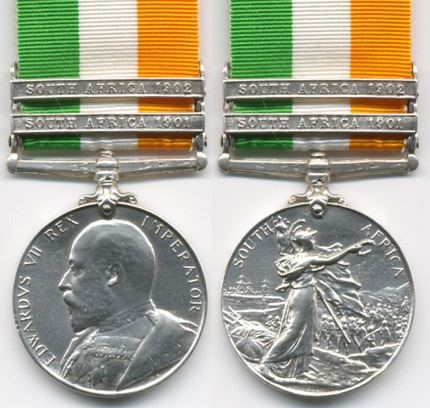 It was certainly common to find them also sporting an array of clasps, as in the image. Boer War clasps were usually awarded in three main categories and worn ‘low to high’ as earned, then attached to the ribbon. The determinant of award seniority was purely chronological according to the starting dates of the applicable battle or campaign. The three main categories were:

2. State: being area of active service within the campaign theatre: for instance ‘Cape Colony’ or            ‘Orange Free State,’ and

No less than twenty-six official, and five unofficial clasps were awarded for the Boer War. Three important peculiarities existed:

1.  One only received a State clasp – ‘Transvaal’ say – if no battle clasp existed for an action in that     same state for which the wearer was eligible,

3.  The two date clasps were normally worn with the KSA unless the recipient was only eligible for        the QSA, in which case they could be worn on the latter.

The full range of British Empire gallantry medals were of course heavily represented in the Boer War. There were numerous Victoria Crosses (VC) awarded, including the first six received by Australians. There were also two other fascinating peculiarities in regard the only instances (in both cases the number being three) of bars to the VC and father-son VC combinations.

Sir Arthur Martin Leake, a medical officer, received his first VC in South Africa in 1902 and his second, the bar, in the early part of the Great War. Frederick Sherston Roberts, killed at the Battle of Colenso in 1899, was a British officer and the son of Lord Roberts, later the senior field commander for the British in the Boer War, who had received his some forty years or so earlier in the Indian Mutiny.

Walter Norris Congreve was awarded his VC in the same action, at Colenso, as the younger Roberts and his son, William La Touche Congreve, won his in France in July 1916, being killed in action very shortly after the award.

All medals are usually striking and distinctive in appearance but the circumstances of their award are often rather more complicated. This is not the case with QSA and the KSA. They are indeed distinctive and were hard earned in the Boer War but were awarded as part of a neat and clearly defined process, made unique by their forced name change midway through the war: Queen Victoria’s Last War.

These two medals are represented in a number of very impressive groups held by the Army Museum of South Australia, very often in conjunction with Great War medals, noting that a large portion of British Empire and Australian soldiers who served in, and survived, the Boer War went on to serve again a decade or so later.

Visitors are welcome to come and view them.