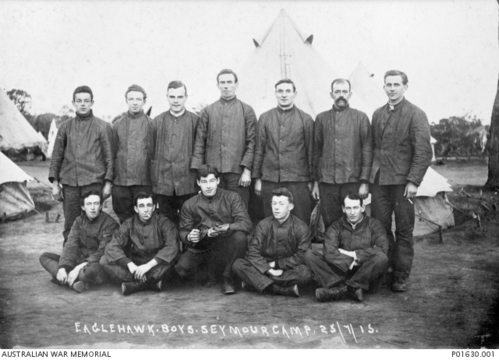 The 29th Battalion was raised in Victoria. Its colour patch indicates that it is part of the 5th Division by the vertical rectangle. The yellow sidebar is unique to the 8th Brigade.  The black sidebar indicates it is the first battalion of the four that belong to the Brigade.

The 29th was embarked to become the first battalion in the 8th Brigade of the 5th Division when the latter was raised in Egypt during the  the 'doubling of the AIF' in early 1916.   The 8th Brigade was a composite brigade with a battalion each from Victoria, New South Wales, and two 'outer States' Battalions, one drawn from Queensland / Victoria and the other from Western and South Australia. The otherwise sequential numbering of battalions and brigades within divisions went somewhat awry with the 8th Brigade which ended up in the 5th Division.

The 29th and its sister Battalions of the 8th Brigade began embarkation for France from Egypt in May 1916.  They were destined for an area known as "The Nursery" in the Armentieres sector of norther France, near two villages either side of the front line;  Fleurbaix on the Allied side and Fromelles (/explore/campaigns/2)on the German side.

Little did they realise that the Brigade's first major action would be recorded as one of the most costly in Australia's military history.  The 8th Brigade was on the left of the 5th Division attack.  Many of the men broke through the forward lines of German trenches looking for what they had been told was a second line of trenches. Instead all they found were a series of shallow drainage ditches.  As the attack was halted to their right, they became exposed in a salient jutting into the German lines and were quickly enfiladed (meaning the men were strung out along the length of the arc of fire of machine guns to their flanks), and subject to counter-attacks and then clearance operations.  In the end they basically had to fight their way back to their own lines, 'run for it', or be killed, wounded or captured.

Many of the casualties of the 8th Brigade lay behind German lines and were buried in mass graves.  One of them became famous in 2008, when the Pheasant Wood mass grave was discovered.  In it lay the remains of many 8th Brigade men, previously listed as "Missing" "No Known Grave" or "Known unto God".  The nearby Pheasant Wood (/explore/cemeteries/17) cemetery was established to receive the remains of these men.

The 29th Battalion  / 8th Brigade / 5th Division did not take any further part in major operations in 1916, after the Fromelles debacle.  They were reinforced and retrained and rejoined the AIF Order of Battle in early 1917.