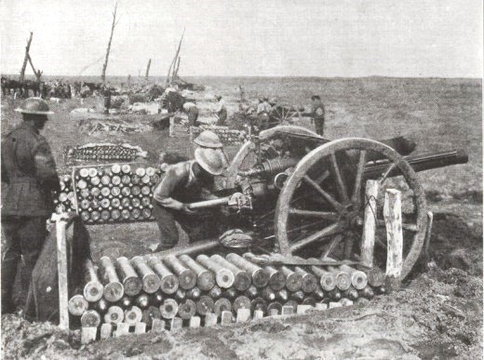 The 6th Field Artillery Brigade was raised to support the 2nd Infantry Division.

The 6th Field Artillery Brigade was raised on 19 October 1915 and retained its structure to January 1917 at which point it was disbanded as part of an AIF-wide re-organisation of artillery assets and units.  It is explained in more detail below.  It comprised:

The standard organisation of Field Artillery took on the form of the Field Artillery Brigade (FAB) which were formed, at least initially,  to be attached to and to support the Infantry Brigades of the same numerric designation.

In 1914 and 1915 the First and Second Division each had three FAB 1st - 6th FAB attached to the 1st-6th  Infantry Brigades respectvely.  Each FAB had three Batteries with 4 x 18 pounders making a total of 12 guns in each FAB.

On arrival in France, the artillery was reorganised for the first of many times.  At the same time a Howitzer-equipped  FAB was raised for each division, numbered 21-25.  The second digit indicated the Division to which it was to be allocated.  Like their field gun equivalents, the Howitzer FAB had 3 x 4 gun batteries, this time of 4.5inch howitzer. However, the Howitzer FAB could not be properly equipped, as manufacture could not initially meet demand.

This resulted in the Howitzer FAB being broken up and their Howitzer Batteries being added to the existing FAB, as they were progressively equipped.

In January 1917, batteries were increased in size to 6 guns each in order to economise on headquarters structures and the number of Field Artillery Brigades in each Division was reduced to two.

The 6th FAB became a casualty of this re-organisaton with its guns being allocated to meet the increase of two guns per Battery across the remaining FAB.

As the war progressed, concentration and weight of fire became the name of the game to facilitate command and control at the highest level.

Later a range of  independent Batteries equipped with specialised weapons like Siege Artillery, Heavy Howitzers and Medium and Heavy Mortars were added to the mix, generally at Division level or higher. The allocation of their fire support was managed accordingly.  See the entry for Divisional artillery for further information.

A more comprehensive account of the equipment, details of the ammunition, Command and Control and Logistics is located HERE - Field Artillery Brigades (/explore/units/248)

The 6th FAB's chronology of campaigns matches that of the Brigade (6th) and Division (2nd) to which it was attached.

It was disbanded in January 1917