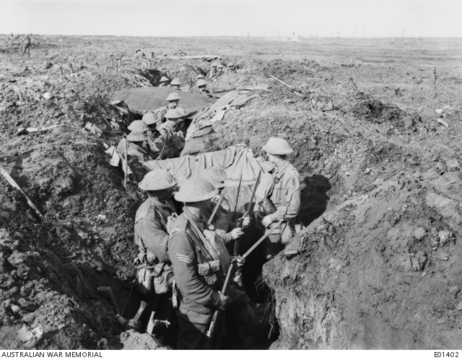 The 30th Battalion was raised in NSW. Its colour patch indicates that it is part of the 5th Division by the vertical rectangle. The yellow sidebar is unique to the 8th Brigade.  The purple sidebar indicates it is the second battalion of the four that belong to the Brigade.

The 30th was embarked to become the second battalion in the 8th Brigade of the 5th Division when the latter was raised in Egypt during the  the 'doubling of the AIF' in early 1916.   The 8th Brigade was a composite Brigade with a Battalion each from Victoria, New South Wales, and two 'outer States' Battalions, one drawn from Queensland / Victoria and the other from Western and South Australia. Until that point the Brigade composition was numerically sequential but that went somewhat awry with the 8th Brigade.

The 30th and its sister Battalions of the 8th Brigade began embarkation for France from Egypt in May 1916.  They were destined for an area known as "The Nursery" in the Armentieres sector of norther France, near two villages either side of the front line;  Fleurbaix on the Allied side and Fromelles on the German side.

Little did they realise that the first major action would go down in history as the most costly in Australia's rather brief military history.