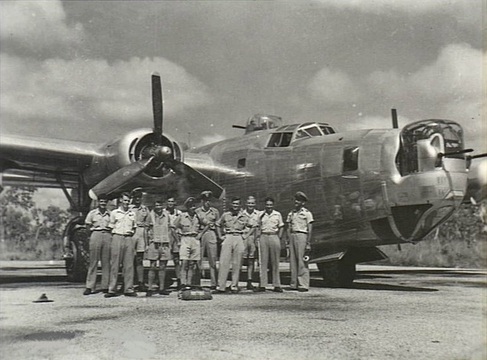 Formed in 1936 the squadron was equipped a with a variety of aircraft and used in coastal patrols.

Following the outbreak of World War II, the squadron was mobilised and its personnel placed on full-time service. The tempo of training increased as the squadron was brought up to strength and prepared for its first operational missions. This came on 15 December when aircraft from the squadron were assigned to convoy escort duty.

Following this, the squadron undertook similar missions in the Great Australian Bight, providing protection for ships sailing for Europe. Initially, the squadron operated Hawker Demons, Avro Ansons, Avro Cadets and a North American NA-16 (Harvard); shortly afterwards it was re-equipped with the Australian-built CAC Wirraway and switched to an army co-operation role.

Fighter unit in Singapore and Malaya

In August 1940, the squadron was dispatched to Seletar, on Singapore, where it operated its Wirraways in support of ground forces that had been stationed there as the threat posed by Japan escalated.

In early 1941, No. 21 Squadron was re-designated a fighter unit and was sent to Sembawang to re-equip with the Brewster Buffalo - probably the worst fighter aircraft ever to have been operated by the RAAF. In mid-1941, as war the situation with  Japan deteriorated , the squadron was sent to Sungai Petani on the Malay Peninsula where they augmented four other British Commonwealth, including No. 453 Squadron RAAF.

The five British Commonwealth units—including two RAF and one Royal New Zealand Air Force squadrons—that flew Buffalos in the Malayan campaign were beset with numerous problems.  A few issues included poorly built and ill-equipped planes, inadequate supplies of spare parts,  inadequate numbers of support staff, their airfields that were difficult to defend against air attack, there was a lack of a clear and coherent command structure,  antagonism between RAF and RAAF squadrons and personnel, and inexperienced pilots lacking appropriate training who were soon to be pitted against combat experiencd Japanese pilots flying the most lethal fighter in the heisphee- the Mitsubishi Zero.  All in all the makings of a disaster which is exactly what occurred.

The squadron's involvement in the fighting came on 8 December 1941, following a heavy Japanese bombing raid on Sungai Petani, which resulted in the loss or damage of several of its aircraft. Initial interception operations proved unsuccessful and, as a result of heavy damage to the airfield, the squadron was withdrawn to Ipoh, falling back through Butterworth, where they squadron achieved its first air-to-air victory, when a Buffalo piloted by Flying Officer Harold Montefiore shot down a Mitsubishi A6M Zero single-engined fighter.

Despite this success, though, No. 21 Squadron suffered severe losses to Japanese fighters, on the ground and in the air, during the first week of the campaign; replacements were only limited, resulting in the squadron's operational merger with 453 Squadron (/explore/units/390).

Together the merged squadron continued operations, but they were withdrawn again, this time back to Singapore.

Operating once more out of Sembawang, 21/453 Squadron, as it became known, flew convoy escort, reconnaissance, air defence and bomber escort missions. In mid-January the squadron experienced a couple of instances of success. On 16 January, while escorting a flight of Vickers Vildebeest light bombers, six of the squadron's Buffaloes shot down three Japanese fighters that rose to attack the Vildebeests. Later, on 26 January, two more Japanese fighters were destroyed and another possibly shot down during a bomber escort mission over Endau.

The Endau mission proved to be No. 21 Squadron's last, though, as it had its remaining aircraft taken away and was split from No. 453 Squadron. At this point, the squadron's surviving pilots and ground crew were sent to Java via Sumatra in the Dutch East Indies where they undertook ground support duties before being evacuated to Australia.  The squadron was disbanded in Fremantle in March 1942.

In September 1943 No. 21 Squadron was re-formed at Gawler, South Australia, and re-equipped with US made single engined Vultee Vengeance dive-bombers.  Following a period at Lowood, Queensland, for advanced training, the squadron  transferred to Nadzab in New Guinea to undertake operations in January - February 1944. By the end of February the unit had commenced attacks on Japanese barge hide-outs on the Wagol River.  Supply dumps and concentrations of troops were also attacked and the squadron took part in large air raids on the Japanese airstrips at Hansa Bay, Madang and Alexishafen in concert with Nos. 23 and 24 Squadrons. (a detailed description of this raid is HERE (/explore/units/1378))

Following further attacks in March against Japanese camps around Pommern Bay and Rempi village, the Vengeance was withdrawn from front-line operational service in New Guinea, as Allied commanders deemed its short flying range unsuitable for the conditions. As a result, No. 21 Squadron returned to Australia on 13 March 1944.

Moving to Camden, New South Wales, and then Leyburn, Queensland, the squadron converted to Consolidated B-24 Liberator heavy bombers in June 1944. Conversion training took six months and as a result, the unit did not see operational service again until 11 January 1945, when, as part of No. 82 Wing RAAF, it attacked targets at Laga and a radio station at Moena Island, operating out of Fenton in the Northern Territory.

During January and February more than a hundred missions were flown against Japanese targets.  On 6 April, near Koepang, along with Liberators from No. 24 Squadron, the squadron attacked a convoy of ships including the cruiser Isuzu. The attack proved unsuccessful.  Other targets attacked included troop areas at Tawo and fuel tanks in Tarakan and Borneo. From July, while the main force remained at Fenton, the squadron sent a detachment to Morotai Island. In the final months of the war the squadron's last operations were concentrated around supporting the Allied landings at Labuan and Balikpapan.

Following the end of the war the unit's aircraft were used as shipping escorts and as transports before returning to Tocumwal, New South Wales. During the war, 42 men from the squadron were killed in action or died on active service. Members from the squadron received the following decorations: five Distinguished Flying Crosses and one Mention in Despatches.