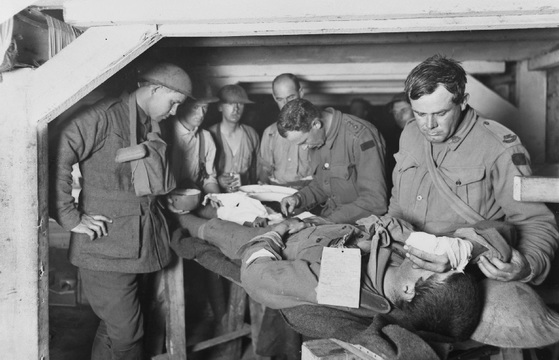 The 3rd Field Ambulance was the Field Ambulance Company that belonged to the Third Brigade of the First Division, comprised of 9th 10th 11th and 12th  Battalions, all of which were drawn from the "outer  States", namely Queensland, South Australia, Western Australia and Tasmania respectively.

The 3rd Brigade were the first to land at Gallipoli on the 25th April 1915 as the Covering Force and the Field Ambulances were soon in action being established near the beach.

Significant numbers of South Australians saw service in the 3rd Field Ambulance and indeed the unit exists to this day as a sub unit of the 9th Combat Service Support Battalion at Warradale in Adelaide's southern suburbs.

Perhaps the most famous members of the 3rd Field Ambulance were Private John Kirkpatrick Simpson and his donkey, who famously evacuated casualties for hte Gallipoli fighting to the beach head until Simpson was killed by a Turkish machine gun on 19 May 1915.

The RAPs served each Battalion (or other units) and were manned by the Regimental Medical Officer (RMO), a qualified doctor generally of Captain rank supported by several non-commissioned officers (NCO) of Sergeant and Corporal rank, with a number of medical orderlies at the rank of Private.

The 3rd Field Ambulances war service closely parallels that of its parent Brigade, the 3rd Brigade.

The 3rd Field Ambulance served at Gallipoli.  Wounded soldiers were evacuated to wother 1 Stationary Hospital on Lemnos, or to hospitals in Cairo.  More seriously wounded men would be evacuated to Malta then to the United Kingdom.

By this time disease was taking its toll mainly due to poor sanitation and deteriorating hygiene.  Dysentery and enteric fever (typhoid) were rife. The 3rd Brigade was extracted from Gallipoli in late October 1915 having been replaced by fresh troops of the 2nd Division.

After re-grouping and re-organising in Egypt from December 1915 unti March 1916, the Australians embarked for Europe arriving in Marseilles in April 1916. After an initial period in "The Nursery" sector in Flanders, the Brigade was sent south to the Somme Valley.

Reinforced, the Battalion was back in action at Mouquet Farm between 19-23 August.

All five Divisions were committed to this epic struglle

There were a series of key battles that defined the Third Ypres campaign.  Menin Road, Polygon Wood, Broodseinde Ridge and the two Battles for Paschendaele.

In late May most of the Australian Divisions moved south to the Somme but the First Division remained in the Merris sector on the French / Belgian border, throughout June, engaged in sustained heavy fighting. The 3rd Brigade took part in the eventual capture of the town of Merris in July and was then re-deployed to the Somme.

On the 8th August the Battle of Amiens began (well east of the city) the great August offensive known as the "Hundred Days" during which the ANZAC Corps swept all before it, under the command of General Sir John Monash.

The Brigade took part in the attacks on the Hindenburg Line in late September 1918.  A number of German field artillery guns captured at this time are to this day displayed in a number of South Australian suburbs and towns including, Victor Harbour and Murray Bridge.

Along with the rest of the AIF, the 10th Battaion and the rest of the 1st Division was withdrawn from the line after the 5th October and were resting reinforcing and training near Epehy when the Armistice was declared.