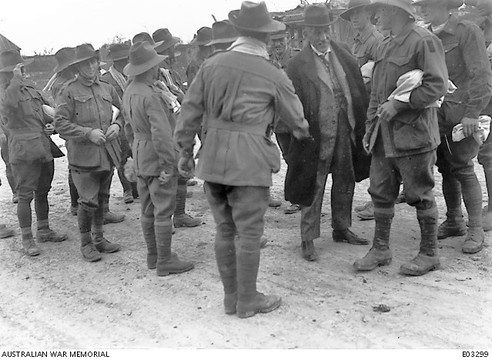 The 14th Field Ambulance provided casualty evacuation and life swaving surgery support to the 14th Brigade, in the 5th Division, comprising the 53rd, 54th, 55th and 56th Battalions, all drawn from NSW.

It was raised as part of the generation of the 5th Division which took place in early 1916 through the 'doubling of the AIF' that took place in Egypt before emabrkation for the Western Front during April  / May 1916.  Its initial engagement inaction was associated with the 5th Divisions's ill-starred attack at Fromelles in July 1916.  The scale of casualties completely overwhelmed the Division's medical assets.  Later the Brigade was engaged in opeations during the spring of 1917 in the pursuit of the German consolidation of the Hindenburg Line, before the great Third Ypres campaign of the autumn of 1917.

In spring 1918 they stood against the German Operation Michael offensive, and then on 8th August the Allied Hundred Days offensive began.  On each occasion the Field Ambulance Companies provided unstinting support to the front line units and sustained casulaties at all points along the evacuation chain in the execution of their role.

The 14th Field Ambulance Company was responsible for 'Second Line' casualty evacuation from 'First Line' Regimental Aid Posts (RAP) in each battalion of the Brigade and across the 5th Division.