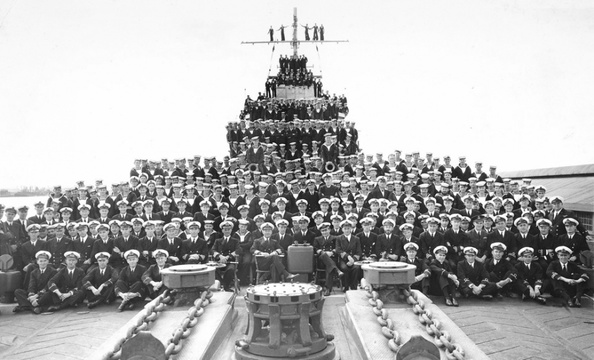 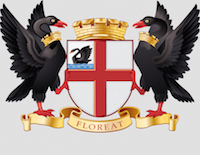 HMAS Perth (I) the first ship to bear the name in the RAN, was a British built Leander Class light cruiser, formerly HMS Amphion, armed with 6 inch (150mm) main armament.

HMAS Perth was a modified Leander-class light cruiser, armed with eight x 6 inch guns in four turrets, and displacing over 6,000 tons.   She was constructed for the Royal Navy, where she was commissioned as HMS Amphion in 1936. After several years on the North America and West Indies Station, the cruiser was transferred to the RAN in 1939 and recommissioned as HMAS Perth, operating during the early part of World War II.

In February 1942, Perth was part of an Allied cruiser squdron and survived the Allied defeat at the Battle of the Java Sea, and together with the USS Houston attempted to break out through the Sunda Strait only to run into a superior Japanese force.  The two Allied cruisers were torpedoed and sunk by the Imperial Japanese Navy at what became known as the Battle of Sunda Strait. Of the 681 sailors aboard, 353 were killed in battle. All but four of the 328 survivors were captured as prisoners of war: 106 died in captivity, and the surviving 218 were returned home to Australia after the war.

On 14 February 1942, Perth sailed with a convoy of empty oil tankers to the Netherlands East Indies: the Allies wanted to retrieve as much oil as possible before the Japanese could invade the islands. En route, the tankers were ordered back to Australia, and Perth was sent to join the American-British-Dutch-Australian (ABDA) fleet. She reached Tanjong Priok on 24 February, then proceeded to Surabaya the next day, where she met the ABDA fleet (which consisted of four other cruisers and nine destroyers). On receiving reports that a Japanese convoy of eight cruisers, twelve destroyers, and thirty transports was heading for Surabaya, the ABDA ships sailed to meet them.

The Japanese ships were located on the afternoon of 27 February, and the Allied ships opened fire, with Perth setting a Japanese cruiser on fire with her second salvo. Later in the engagement, the Australian cruiser successfully fired on a Japanese destroyer. The forces broke apart after the British cruiser HMS Exeter was disabled, then later reengaged; during this, the Dutch cruisers De Ruyter and HNLMS Java were torpedoed and sunk.

HMAS Perth and the United States cruiser USS Houston were the only large Allied ships to survive the Battle of the Java Sea, and retreated to Tanjong Priok, where they arrived on 28 February 1942. The two ships attempted to resupply, but fuel shortages meant that Perth took on only half her normal fuel capacity, and a lack of shells left the cruisers with the little ammunition they had left over from the previous day. Perth, Houston, and the Dutch destroyer Evertsen were ordered to sail for Tjilatjap via the Sunda Strait.

Perth and Houston sailed at 19:00 (Evertsen was delayed), with the Australian warship leading. The Allies believed that Sunda Strait was free of enemy vessels, but a large Japanese force had assembled at Bantam Bay. At 23:06, the two cruisers were off St. Nicholas Point when lookouts on Perth sighted an unidentified ship; when it was realised that she was a Japanese destroyer, the Australian ship engaged. However, as this happened, multiple Japanese warships appeared and surrounded the two Allied ships.

At midnight, with ammunition running low, Captain Hector Waller ordered his ship to try to force a way through. Just as Perth settled on a new heading, four Japanese torpedoes hit the cruiser in the space of a few minutes. The first hit on the starboard side and damaged the forward engine room, the second caused a hull breach near the bridge, the third impacted in the starboard aft (rear) area, and the fourth struck on the port side. Waller gave the order to abandon ship after the second torpedo impact. After some further close-range fire from the destroyers, Perth heeled to port and sank at 00:25 on   1 March 1942, with 353 killed: 342 RAN (including Waller), 5 Royal Navy, 3 Royal Australian Air Force, and 3 civilian canteen workers. Houston was torpedoed and sank about 20 minutes later.

Of the 328 survivors, four died after reaching shore, while the rest were captured as prisoners of war. 106 died during their internment: 105 naval and 1 RAAF, including 38 killed by Allied attacks on Japanese 'hell ships'. The remaining 218 were repatriated after the war.

See the link (sidebar)  to the article about the PoW Death ships.  Perth survivors were on board the Rakuyo Maru when it was lost.

If you have detailed knowledge of HMAS Perth or the actions she was engaged in and would like to contribute information or images, contact us at [email protected]