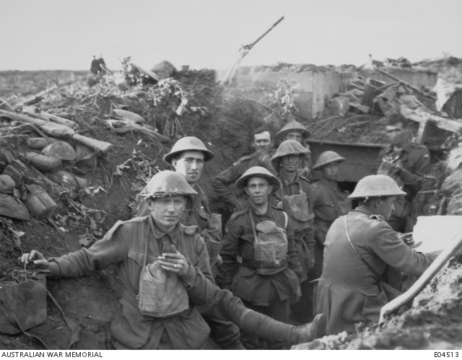 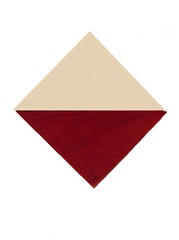 The 24th Battalion was raised at Broadmeadows north of Melbourne, in early 1915, to form the fourth Battalion of the 6th Brigade in the 2nd Division. Its colour patch tells the story - the diamond shape denoted the 2nd Division.  The red lower segment indicates that it is the second Brigade in the Division and the white upper segment denotes that it is the fourth battalion in the brigade.  The letter 'A' indicates service at ANZAC and was worn with great pride.

Along with the 21st, 22nd and 23rd Battalion, the 24th formed part of the 6th Brigade, which was assigned to the 2nd Division. It had originally been planned that the battalion would be raised from personnel drawn from outside of Victoria and it was designated as an "outer states" battalion meaning that it would draw its recruits from the less populous states of Queensland, Tasmania, South Australia and Western Australia.  A sureit of recruits that had arrived at Broadmeadows at the time it was decided to raise the battalion there, from Victorian volunteers. Very little training was carried out before the battalion sailed from Melbourne just a week after being formed.

After arriving in Egypt, the 24th completed its training during July and August before being sent to Gallipoli in early September as part of the 2nd Division reinforcements for the forces that had landed there in April. Arriving on the peninsula on 4 September, the 24th served in the Lone Pine sector, taking over responsibility for the front line the on 12 September.

The Battalion's positions were very close to the Turkish trenches and was hotly contested. The position was so tenuous, that the troops holding it had to be rotated regularly, and as a result the 24th spent the remainder of the campaign rotating with the 23rd Battalion to hold the position.  They remained until the evacuation in December. 1915.

Following this they returned to Egypt where they took part in the defence of the Suez Canal.

In early 1916, the AIF was ''doubled' to prepare it for operations on the Westen Front.  Their first major action in France was at Pozières / Mouquet Farm in July and August 1916. For the next two-and-a-half years the 24th Battalion took part in many of the major battles undertaken by the Australians in Europe. In 1917, after the Germans shortened their lines and withdrew to the Hindenburg Line in the 'Outpost Villages' operatins culminating at Bullecourt and the attacks on the Hindenburg Line where in May the battalion suffered over 80 per cent casualties, before later in the year attacking around Broodseinde Ridge during the Third Ypres campaign.

In 1918, despite being severely depleted, it played a defensive role during the German Spring Offensive before supporting the attack at Le Hamel in July.

In August, it joined the Allied Hundred Days Offensive, attacking around Amiens, and then joining the advance that followed.

In early October 1918, the battalion attacked the Beaurevoir and then Montbrehain. It was during this final attack, on 5 October, that one of the battalion's subalterns, George Ingram, performed the deeds that resulted in him being awarded the Battalions only Victoria Cross of the War.

At the conclusion of the battle, the 24th was withdrawn from the line for rest and reorganisation and like the rest of the AIF Divisions,  did not take part in further combat before the war came to an end on 11 November 1918.