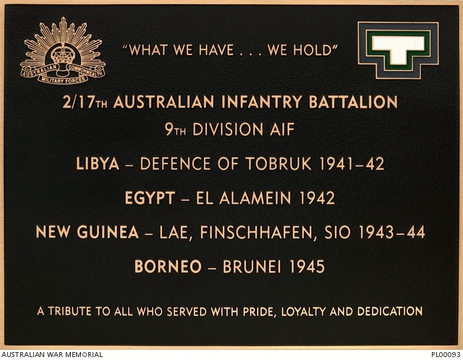 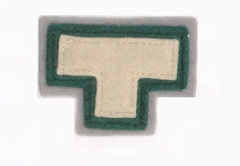 Extract from an article in Wikipeadia

The 2/17th Battalion was raised in April 1940 in New South Wales, when it formed part of the 20th Brigade.  The 20th Brigade was eventually allocated to the 9th Division. After completing basic training in Australia, the unit was deployed to the Middle East. In early 1941, it took part in the fighting at Tobruk, defending the port until relieved. A period of garrison duties followed in Syria and Lebanon before the battalion took part in the First and Second Battles of El Alamein in mid-1942, along wit the rest of the 9th Division.  As the focus of the Australian Army's operations shifted to the Pacific theatre to fight the Japanese, the 9th Division was the last to return home, and 2/17th Battalion returned to Australia early in 1943.

In 1943–44, the battalion fought in New Guinea, conducting an amphibious landing as part of operations to capture Lae in early September at the end of the Salamaua–Lae campaign (/explore/campaigns/79), before participating in the follow-up landing on the Huon Peninsula as Japanese forces withdrew inland from Lae. In early 1944, the battalion was withdrawn to Australia for rest and reorganisation and a long period of inactivity followed before it returned to combat. Its final campaign came late in the war when it was committed to the fighting in Borneo in June 1945, landing at Brunei. Following the end of the war, the battalion was disbanded in early 1946.

The 2/17th Battalion was formed in the late April and early May of 1940 at Ingleburn Army Camp in south-west Sydney. As an infantry Battalion it comprised roughly nine hundred newly recruited New South Welshmen.

It has similarly been noted that “the men of the 2/17Bn had fought against the fighting soldiers of Germany, Italy and Japan, and they had never been defeated. No Battalion can hope for a better record”. Less formally, an English-speaking German soldier captured by soldiers of the 2/17th Battalion at Tobruk felt compelled to remark to his captors that “Australian soldiers are very brave” – a remark which met with the suitably laconic response of “my bloody oath”.

Aside from this praise, the 2/17th Battalion holds a number of curious or unique distinctions.

Corporal John Hurst Edmondson of the 2/17th Battalion was awarded Australia’s first Victoria Cross in the Second World War for his actions in battle at Tobruk.
The Battalion played a key role in the Easter Battle at Tobruk, an event which marked the first sustained defeat of the famed and seemingly invincible German Wehrmacht in the Second World War. In a letter to Roosevelt, Churchill commented that “the repulse of the German attacks - this small fierce fight, in which the enemy lost prisoners, killed and tanks, together with aircraft out of all proportion to our losses, is the first time they have tasted defeat”.

The 2/17th Battalion spearheaded the first amphibious landings of Australian troops since Gallipoli, at Lae and Finschhafen in 1943.

Evelyn ‘Evo’ Owen was serving with the 2/17th Battalion in 1940 when he designed and perfected the Owen Gun – the mass-produced submachine gun of Australian soldiers by the end of the war. A 2/17th contemporary of Owen remarked that “in doing so not only saved the lives of men from Australia by putting quickly produced automatic weapons in their hands, but perhaps reduced the loss of casualties against the Japanese in New Guinea”.