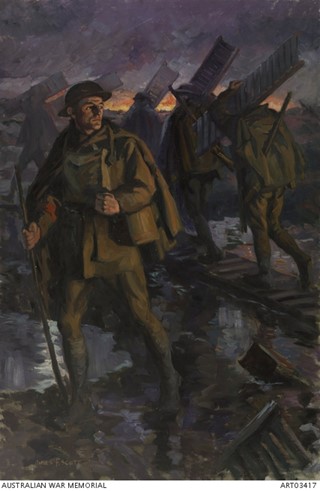 The runner – AWM ART03417
A company runner stands in the foreground as soldiers lay duckboards behind him.

Sam Mendes’ 2019 film 1917 follows the journey of Lance Corporals William Schofield and Tom Blake as they endeavor to deliver a message that could save the lives of thousands of Allied soldiers. The pair traverse the dangers of no mans land, German trenches wired with explosives and a crumbling French town crawling with enemy snipers before reaching their destination.

The characters in the film are fictional, but the story is far from it. Company runners were an essential part of trench warfare in the First World War. Radio communication was in its infancy and as such was unreliable and insecure. Field telephones were also problematically time consuming to install, and easily disrupted by the enemy (as is the case in 1917). Company runners negated these difficulties by relaying messages in person from trench to trench. It was a perilous task; runners were essentially target-practice for enemy snipers and machine gunners as they sprinted past enemy lines with little to no cover protecting them.

John (better known as Jack) Samuel Gant was a company runner for the 17th Infantry Battalion. He was born in Hintlesham, a small town in Suffolk, England to parents John and Laura.[i] On 31 July 1912, Jack emigrated to Australia, travelling on The Norseman from London to Sydney.[ii] He began work on a sheep and wheat farm in the small New South Wales town of Canowindra where he remained until enlisting in the AIF on 25 March 1916 as part of the 15th reinforcements of the 17th Infantry Battalion.[iii] Jack sailed for England aboard the HMAT Euripides on 9 September 1916, disembarking in Plymouth on 26 October. From there, the reinforcements proceeded to France aboard the HMT Golden Eagle, marching into Estaples and joining the rest of the battalion on 18 December 1916.[iv]

Jack served on the Western Front in France during the early months of 1917.[v] On 2 March, he was injured by bomb shrapnel in his left thigh,[vi] presumably while on a company running mission. He was forced to sail to England on board the HS Gloucester Castle where he was admitted to 3rd London General Hospital in Wandsworth.[vii] After three months of recuperation, Jack re-joined the 17th Battalion in France on 10 July 1917.[viii]

Jack’s biggest challenge of the war was still to come. The Battle of Amiens on 8 August 1918 launched the Allied Hundred Days Offensive, which saw the Allies gain significant ground on the Somme front, pushing the German Army back to Mont Saint-Quentin. More a knoll than a mountain (the Mont was only 100 meters high), Mont Saint-Quentin still provided the Germans a key observation post, and marked the last defensive position between the Hindenburg line.[ix] The 2nd Australian Division were tasked with capturing the Mont for the Allies. This meant crossing the elbow of the River Somme and engaging in, quite literally, an uphill battle to breach the Mont and attack the German trenches behind. The battle began at midnight 31 August 1918 and continued until the night of 3 September. In this time, the Australians managed to capture the nearby towns of Péronne and Flamicourt, and forced a German retreat to the Hindenburg line.[x] Over 2,600 German prisoners were captured, but at the heavy cost of 3,000 Allied casualties.[xi] 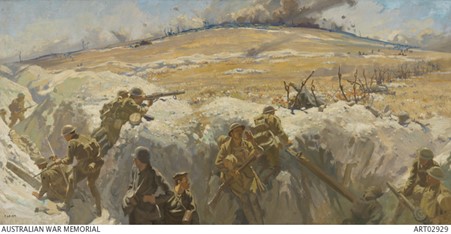 In a battle that was described as “the greatest military achievement of the war”, Jack Samuel Gant was himself great. Given the sheer size of the battle, which involved battalions from every Australian state,[xii] communication between companies and flanks was especially crucial to the success of the Allies. Jack was awarded the Military Medal for the work he did delivering messages between Battalion Headquarters and the troops on the ground. He “worked incessantly for 18 hours, through heavy and continuous artillery and machine gun fire, and never once failed to deliver his message to the front line, although time and again, sniped at by the enemy, who overlooked the position from 100 yards distance”.[xiii] One cannot help but conjure scenes from 1917 when reading the details of Jack’s Military Medal recommendation. Perhaps Jack stalked his way through the streets of Péronne, just as Lance Corporal Schofield did the deserted French town. Indeed, given the language used in the recommendation, it is likely Jack put himself in just as much danger as the characters in the film.

A few months after his heroics at Mont Saint-Quentin, on 3 October 1918, Jack was wounded again.[xiv] This injury was more serious – a gunshot wound to the head and shoulder.[xv] Jack was treated at the 2nd General Hospital in Le Havre where he contracted pneumonia.[xvi] Over the course of 6 weeks, his condition deteriorated. Jack Samuel Gant died on 19 November 1918, just eight days after the Armistice.[xvii] He is buried at Saint Marie Cemetery in Le Havre.[xviii] Jack’s brother, Thomas J Gant, was also a casualty of the Somme,[xix] only adding to the suffering of the remaining Gant family who had not seen their son or brother since he set sail for Australia six years prior.

Jack’s story as a company runner is one of many from World War One. As Jack was relentlessly carrying messages to the front line at Mont Saint Quentin, so too was Private Robert Mactier of the 23rd Infantry Battalion. Mactier was posthumously awarded the Victoria Cross for his role as the battalion’s company runner during the battle. Tasked with investigating a German post, Mactier “killed a machine gun garrison of eight men…armed only with a revolver and bombs”.[xx] He then jumped into another German strong point, causing the six men inside to “immediately surrender”.[xxi] He continued to the next trench, where he took out yet another machine gun post, before he was killed at close range. It was due to the “exceptional valour and determination of Private Mactier that the battalion was able to…capture the village of Mt. St. Quentin a few hours later”.[xxii] Mactier was the only man from the 23rd Battalion to receive Australia’s highest military honour. 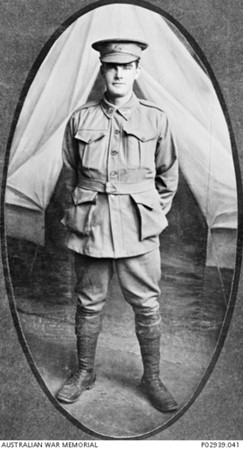 The task of the company runner has been made famous by the fictional events of 1917, but the reality is, for those who really undertook such missions, the dangers were all too real and the stakes just as high. We remember the bravery of men like Jack Samuel Gant, who threw themselves into the fray without hesitation in order to deliver messages that could turn the tides of battle and save the lives of others.