With the AFL Grand Final taking place this weekend, it seemed the perfect time to look back upon another important football game. A recent submission on the profile of Rhys Roberts alerted me to a football match that, rather than taking place at the MCG, was held on the grounds of the Stalag Luft VI Prisoner of War Camp in Heydekrug, East Prussia. 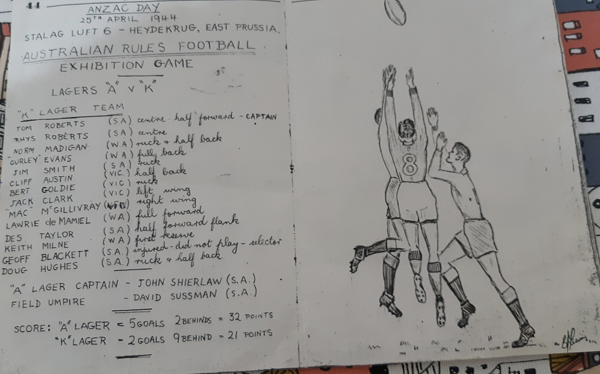 Anzac Day in 1944 saw two teams of Australian airmen, Team ‘A’ Lager and Team ‘K’ Lager, take to the field in an Australian Rules Football Exhibition Game. ‘Lager’ translates to ‘camp’ in English, so presumably the teams were made up of men from the A and K subdivisions of Stalag Luft VI. Living on a diet of predominantly potatoes, it is incredible that any of these men had the energy to play a game of football. Their dedication demonstrates the passion they had for the game, as well as the importance of reminding oneself of home in the hardest of times.

K Lager was lead by their captain Warrant Officer Thomas Alwyn Roberts, born in Kilkenny, South Australia. Thomas was reported missing on the 28th of January 1944 after bailing out of his Wellington plane in Italy. 37 Squadron had been instructed to attack marshalling yards at Foligno, but were overpowered by resistance from Luftwaffe pilots. Thomas survived the war, and was discharged on the 19th of November, 1945.

Playing through the middle for K Lager was Warrant Officer Rhys Roberts. An ex-student of St Peters College and Roseworthy Agricultural College (where he was awarded a 3 year scholarship), he enlisted in October of 1940 and served in 233 Squadron (RAF). Warrant Officer Roberts found himself in Stalag Luft VI after his plane was shot down at Tobruk. He was the only survivor of the crash, however he did not escape lightly. He received serious burns to his face as he escaped the burning plane, and spent his first 3 months after capture in a German hospital. For a period of time before a skin graft operation restored his lower eyelids, Rhys was unable to fully close his eyes. The nurse tending to Rhys after his eye operation wrote home to his mother, telling her how she had read to him while his eyes were bandaged for a week. Her letter ended with, “we are all very fond of Rhys…after this I’m taking him for a long walk and a picnic”. Rhys was discharged in November, 1945 and returned home “fit, well and cheerful” to continue the rest of his life.

The wing positions were filled by Warrant Officer Jack Robert Clark and Warrant Officer George Howard ‘Mac’ McGillivray. Serving as part of 466 Squadron and 101 Squadron (RAF) respectively, the wingman were two interstate players in a team dominated by South Australians.

Making up the forward line was Warrant Officer John Bertram Goldie (37 Squadron), Warrant Officer Laurence Raymond ‘Laurie’ De Mamiel (1 Communications Unit), Warrant Officer David Keith Milne (37 Squadron) and Harold Cameron ‘Des’ Taylor. Warrant Officer De Mamiel saw service in Palestine, Egypt, Iraq and Iran. When he was initially captured, Laurie was sent to a POW camp in Callithea, Greece, thereafter being transferred to Stalag Luft VI. He was a qualified navigator and wireless air gunner. He was schooled at Perth’s Christian Brothers College, and as a young man played in the WAFL for East Perth. There is no doubt he was a valuable asset for K Lager at full-forward.

On the half-back flank was Warrant Officer Norman James Madigan (40 Squadron), a mining engine driver from North Perth. On the 18th of August 1943, Norman’s aircraft was hit near Viterbo in Italy, and he was forced bail out 4,000 feet above the ground. “The aircraft was full of smoke and rolling and diving steeply”. Once on the ground, Norman spent 2 days on the run from Italian soldiers, unsuccessfully attempting to gain shelter with Viterbo peasants. He was eventually captured by Italian soldiers, however promptly escaped the Italian POW camp on September 8th. Unfortunately, he was recaptured while hiding out with a Canadian soldier in Rome, this time by German soldiers. He was then sent to the more secure Stalag Luft VI. Joining him across the half-back line were Flight Lieutenant Clifton Edward Austin (460 Squadron) from Melbourne and Warrant Officer Robert Douglas ‘Doug’ Hughes (466 Squadron) from Prospect in South Australia.

The last line of defence were full-back Warrant Officer Horace Clement Evans, known more fondly as ‘Curley’ (466 Squadron) and back pocket Warrant Officer Geoffrey Caleb Blacket of 21 Squadron (RAF) (who was unfortunately injured at the time and could not participate). Warrant Officer Evans was half-way through his Economics degree at the University of Adelaide before he enlisted. He was both a brilliant cricketer and footballer, lending his talents to the University team. Warrant Officer Blacket was also South Australian, born in Rose Park. He was a wireless gunner, serving as part of the English Bomber Command. He survived the war, and is now buried in Karoonda Cemetery.

Lastly for K Lager was the ruckman Flying Officer James Herbert Smith of 7 Squadron (RAF). James was the son of the Glenelg Mayor, and was born and raised there. On the 25th of February 1944, the Lancaster aircraft he was serving in was damaged, and he and his crew were forced to bail out. Only James and one other survived the crash. A year earlier, his younger brother, Warrant Officer P.K. Smith, was killed in a similar accident. Thankfully, James survived the war and returned home to his wife and family.

The umpire for the day was Warrant Officer David Harold Susman (150 Squadron). Originally from Ballarat, David moved to Adelaide for work and enlisted for the war in October of 1940.

The match was a low-scoring, seemingly scrappy affair. K Lager managed plenty of scoring opportunities, but could only convert a score of 2 goals 9 behinds for a total of 21, not enough to defeat A Lager, who managed 5 goals and 2 behind for a total of 32.

To conclude, I want to mention A Lager captain Warrant Officer John Gow Shierlaw. John lived in Medindie and was a student at Pulteney Grammar School and later at St Peters College, where he had 3 years of cadet training. After graduating, he studied Physics and Law at the University of Adelaide from 1938-40. He enlisted in the Royal Australian Air Force in March of 1941. He served as part of the 458 Squadron. On the 23rd of March 1943, John was reported missing after he did not return to the RAF Shallufa airbase in Egypt. On the 25th, he was reported as a prisoner of war. John spent nearly 2 years inside Stalag Luft VI before he and some other Australian prisoners were marched to a new location. One such prisoner, Sergeant Bobbie Lewis Fenton, described the journey as “walk[ing] round in circles [for] 200 miles in 3 weeks” with nothing but potatoes for sustenance. In a tragic accident, on the 19th April 1945, John Shierlaw was killed by machine gun fire from an Allied Hawker Typhoon. He was buried in a cemetery in Giesler.

As a football fan and a St Peters old scholar myself, I can’t help but mention the parallel between John Shierlaw and Greater Western Sydney captain Phil Davis. Both men grew up in North Adelaide and attended St Peters College. To achieve the rank of Warrant Officer and the honour of captaining Lager A in the exhibition match, John must have been a well respected leader amongst his Squadron and fellow POW’s. Phil too is an excellent leader, having taken on the role of GWS captain at only 20 years of age. Since then, he has lead his team to 3 Preliminary Finals, and now a Grand Final. I was fortunate enough to hear Phil speak about leadership before my 2016 Intercollegiate match against PAC. No doubt John Shierlaw and Rhys Roberts played in their own Intercol matches just as the boys continue to do today.

I’m sure Phil Davis would find the story of how Warrant Officer Shierlaw lead his team to victory in 1944 on a diet of potatoes alone truely inspirational; perhaps inspirational enough to will his own team over the line against Richmond on Saturday.

If you recognise the name of anyone mentioned in this article, we would love to hear from you and learn more about these incredible Australians. 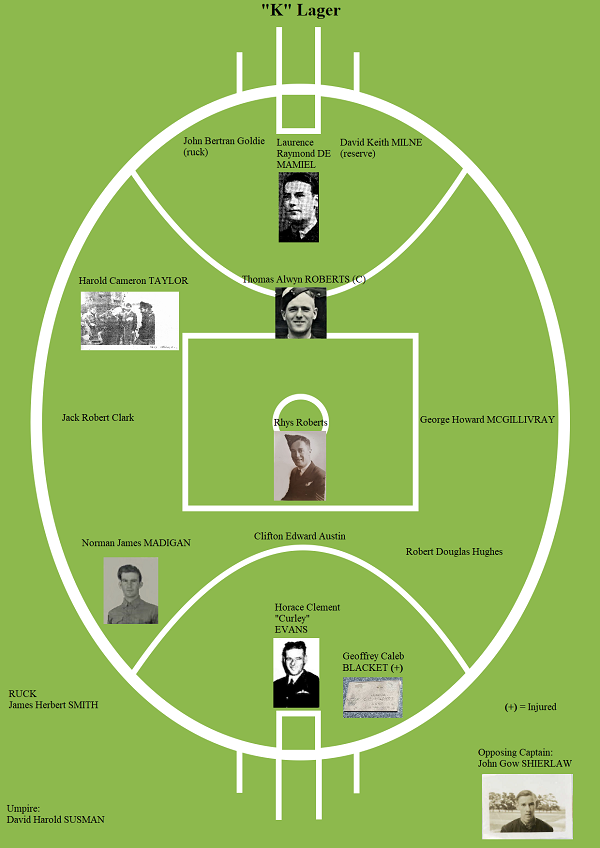