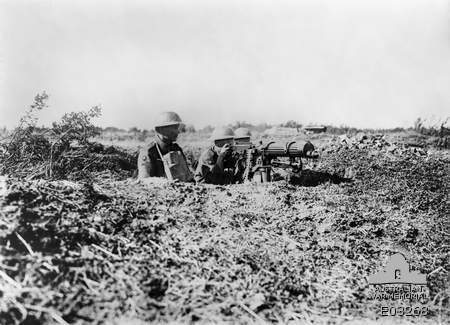 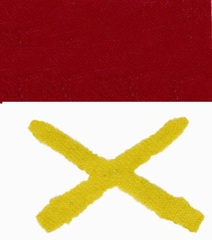 The 2nd Machine Gun Company (2 MG Coy) was allocated to the 2nd Brigade of the First Division, and the men would have been in most (but not all) cases drawn from the Battalions of that Brigade (5th, 6th, 7th and 8th  Battalions, all from Victoria).  Brigade units such as Engineers, Artillery , MG Companies and Trench Mortar Batteries tended to reflect the origins of the Battalions in the Brigade.

Each Infantry Brigade had a MG Coy under command. Machine Gun Battalions were formed in March 1918 by aggregating the Machine Gun Companies, attached to each Brigade. The elements of the MG Battalions and Companies were allocated to sections of the line in detachments of varying sizes depending on the task, but generally as a minimum in pairs as a 'section'.  A section would be two guns and their crews (generally three men per gun).

MG Companies and Battalions were equipped with the legendary Vickers Medium Machine Gun. This weapon was served by a crew of three and mounted on a tripod.  All up it had a weight of about 40kg less ammunition; it was therefore not portable to the extent that it would be carried as part of an attacking formation.  That role emerged with the advent of the Lewis Gun, a Light machine gun.

Its direct counterpart on the German side was the 'Spandau' MG08, a weapon of similar appearance and capability.  These weapons dominated the battlefield and together with artillery, were directly responsible for the bulk of battle casualties.  Their effect was to inhibit movement on the battlefield and force the other side to seek cover.

Both the Vickers and MG08 had a distinctive appearance largely because of a cylindrical water jacket sleeve around the barrel which contained water and was designed to cool the barrel when firing at the rapid rate. The MG08 was mounted on a characteristic 'sled' rather than the tripod of the Vickers. Both achieved continuous fire through an automatic firing action that was driven by the propellant gases of fired ammunition, and the provision of ammunition in canvas belts.

They would be sited to provide flanking fire across a defensive front, often covering belts of barbed wire or other obstacles forcing the enemy to attack through their line of fire with devastating results; a tactic known as "enfilade fire". They were often the lynch-pin of defensive positions and thus the object of enemy attempts to neutralise them as a prelude to attack, by mortar, artillery fire or even raids by parties of grenadiers with hand and rifle grenades.

In attack they would be sited to provide indirect 'plunging fire' into enemy positions in depth at long range to prevent enemy reinforcements reaching the objective of the attack, or to disrupt enemy attempts to withdraw, in a manner not dissimilar to artillery. Machine guns and artillery between them were the dominant influences on the battlefields of the Great War until late in the war when manoeuvre regained importance with the advent of armoured vehicles and ground attack aircraft that could suppress enemy defences.