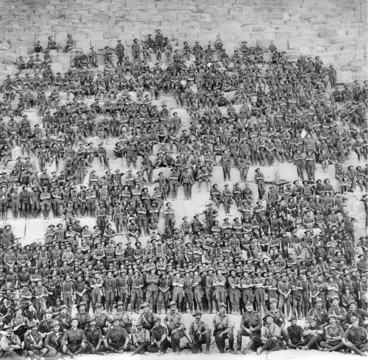 On August 4 1914 Great Britain declared war on Germany. Australia quickly followed the Mother Land’s call to arms. A rush of volunteers flocked to Blackboy Hill Camp near Perth and the 11th Battalion became the WA contribution to the 3rd Brigade in the 1st Division.  The Third Brigade comprised Battalions from the smaller States.

They were assembed equipped and trained (many had served in the militia so army drill, shooting and field exercises were not new to them) and by late October the Great Convoy began assembling in ports around the country departing over the period 15-25 October 1914.  The 11th Battalion left direct from Fremantle (along with ships carrying the 10th Battalion) joining the rest of the convoy and escorts which had assembled at Albany, at sea, before crossing the Indian Ocean for the Middle East.

Like its sister Battalions in the 3rd Brigade, the 11th Battalion would go on to make history at Gallipoli as part of the Covering Force - the first ashore.  The 11th Battalion landed at Anzac on 25th April 1915, led by Lieutenant Colonel James Johnston, the officer who had raised the battalion. Ten days after the landing, a company from the 11th Battalion mounted the AIF's first raid of the war against Turkish positions at Gaba Tepe, led by the redoubtable Major Raymond Leane who subsequently commanded the 11th and 48th Battalions.

Subsequently, the battalion was heavily involved in defending the front line of the ANZAC beachhead. In August, it made preparatory attacks at the southern end of the ANZAC position before the battle of Lone Pine. The battalion served served throughout the campaign at ANZAC until the evacuation in December.

Following extraction to Egypt, it was split along with all of the Battalions in the 1st-4th Brigades to create the new Battalions of the 4th and 5th Divisions.  The 11th Battalion's 'pup' Battalion became the 51st Battalion in the 13th Brigade in the 4th Division.

In March 1916, the newly 'doubled' AIF began sailing for France and the Western Front.

From then until 1918 the battalion was heavily involved in operations against the German Army. The battalion's first major action in France was at Pozieres in the Somme valley in July 1916. After Pozieres / Mouquet Farm,  the battalion fought at Bullecourt in the bloody Second battle in May 1917, and then to Ypres in Flanders for the great offensive which while initially successful, with victories in which the Battalion was involved at Menin Road and Broodseinde Ridge, the offensive was ultimately foiled by the onset of torrential rain and the mud and misery of Passchendaele.  The 11th Battalion sat out the winter in Flanders.

1917 began with a German consolidation of their Front Line and an orderly withdrawal through what were called 'The Outpost Villages' through which they conducted a delaying defence.  The AIF was tasked to follow this up and a series of engagements ensued, culminating in April with the first of two attacks on Bullecourt.  First Bullecourt was an exclusively 4th Division attack which although successful in breaking in to the German line was not adequately supported and it subsequently failed.  Second Bullecourt followed in May and involved the 1st 2nd and 5th Divisions.   Tactically it was very similar to First Bullecourt with a break-in being achieved, the tanks failing - again - and inadquate artillerry support because of difficulties getting the guns far enough forward.   From a caualty perspective, it was Pozieres all over again.

The 1st Division was reconstituted and reinforced during the period  May -end July, when all of the AIF (for the first time including the 3rd Division) was committed to the Third Ypres campaign.  The 1st Division was committed to fighting at Menin Road inlate September 1917 and at Broodseinde Ridge on 4th October.  The Third Ypres campaign bogged down in misery of 1st and 2nd Passchendaele in late October and November.

The Battalion helped to repel the German Spring Offensive in March - April 1918 in Flanders.  The AIF had been sent south to bolster the British 5th Army which was crumbling io front of the German onslaught.  Then it was realised that an attack was to be made in Flanders towards the rail head of Hazebrouk, so the 1st Division rushed back to be told by British General Harrington CoS British 2nd Army, on arrival at Hazebrouk station, that they (the 1st Division) were the only formed body of troops between here and the Channel Ports (Calais and Bolougne).   They became a rallying point around which other troops copnsolidated. and the Operation Georgette attacks were blunted.  As a result,  the Battle Honours Lys Hazebrouck and Kemmel were awarded.