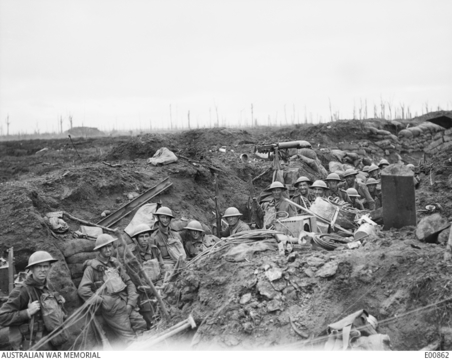 The 3rd Battalion was raised in August 1914 as part of the 1st Brigade (/explore/units/139) in the 1st Division. Its colour patch is its 'pedigree'. The rectangle signifies the First Division. The green lower portion indicates the first brigade in the Division and the brown upper the third battalion.

The 3rd Battalion was raised at Liverpool (SW of Sydney).  Its men were drawn from southern NSW - Goulburn, Yass and down to Albury and across to Hay in the West. It departed Australia in October 1914.

On August 4 1914 Great Britain declared war on Germany. Australia quickly followed the Mother Land’s call to arms. A rush of volunteers flocked to Victoria Barracks in Paddington and to Liverpool in Sydney's south west to enlist.

On 17th August all those that had volunteered and enlisted in the preceding days were called into Victoria Barracks where they were divided into four Battalions.

Thus 3rd Battalion came into being alongside the 1st, 2nd and 4th Battalions forming the 1st Australian Infantry Brigade. The Battalion was then marched to Randwick Racecourse where attestations were completed with the recruits signing on for the duration of the war and four months.

The Battalion arrived in Egypt on 2 December 1914 and landed at Gallipoli on the first day, as part of the second and third waves. It served on the peninsula until the evacuation in December. In Egypt in March 1916 the AIF was ‘doubled’: the 4th and 5th Divisions were added to the 1st and 2nd Divisions, which already existed. The sixteen battalions which had fought on Gallipoli were each split, with half the personnel in each going to form a ‘pup’ or 'daughter' battalion; the gaps were filled with new recruits from Australia. The 3rd Battalion's 'pup' unit was the 55th Battalion, (/explore/units/350) which was part of the 14th Brigade (/explore/units/803) in the 5th Division.

The 3rd Battalion moved to France in March 1916, and spent the rest of the war on or behind the Western Front, principally fighting on the Somme and near Ypres. It ceased active operations in September 1918.