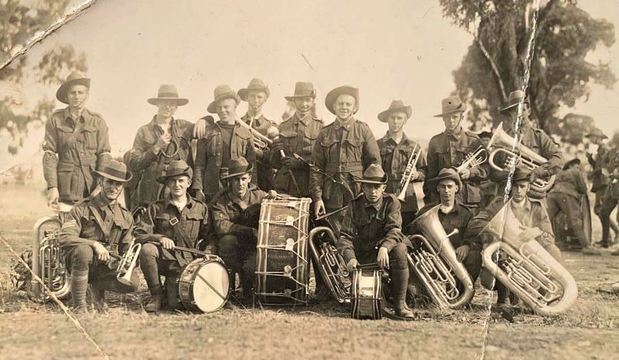 The 8th Battalion raised at Broadmeadows Camp north of Melbourne was the last of the four battalions raised in the second Brigade of the 1st Division; as depicted by its colour patch. The rectangle signifies the First Division. The red lower portion indicates the second brigade in the Division and the white upper the fourth battalion in the Brigade.

The 6th Battalion landed at Anzac on 25th April 1915 as part of the second wave, led by Lieutenant Colonel William Bolton. In early May,  the 2nd Brigade was transferred from ANZAC to Cape Helles the suthernmost tip of the Peninsula, to help in the attack on the village of Krithia. The attack captured little ground but cost the brigade almost a third of its strength. The Victorian battalions forming the 2nd Brigade returned to ANZAC to help defend the beachhead, and in August the 2nd Brigade fought at the battle of Lone Pine. The battalion served at ANZAC until the evacuation in December. having served throughout the campaign.

Following extraction to Egypt, it was split along with all of the Battalions in the 1st-4th Brigades to create cadres of experienced officers NCO and soldiers to form the basis of the new Battalions of the 4th and 5th Divisions.  The 8th Battalions 'pup' Battalion became the 60th Battalion in the 15th Brigade in the 5th Division.