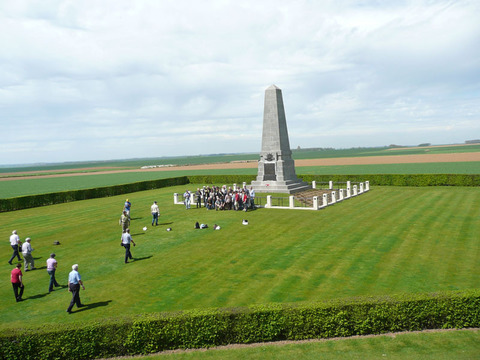 The 1st Division was raised at the outbreak of war and was the first to depart Australian shores in October 1914.  It served at ANZAC, initially under General William Bridges until he was mortally wounded by a sniper, then by Brigadier Walker (interim) and Major General Legge, with Walker resuming command after Legge was evacuated.

1st Division AIF served at ANZAC from the Landing until the Evacuation.  At ANZAC it comprised the 1st, 2nd, 3rd and 4th Brigades although the 4th Brigade was detached under Command of the ANZAC Division commanded by Major General Godley.

At Gallipoli the Australian Divisions had four Infantry Brigades, but when they reorganised in Egypt in early 1916 this was changed to the standard British Army arrangement of three Brigades. The 4th Brigade was used to spawn the 4th Division in the process known as the 'doubling of the AIF'.

A division was a large formation; at full strength it numbered over 16,000 men. These men had to be fed and clothed, moved, organised, and directed to fight. A divisional staff was required to do this, and staff officers needed expertise in managing such a large group of men. Unfortunately, Australia possessed very few staff officers at the beginning of the war with any degree of competence. Like the soldiers they commanded, they learned on the job - through trial and error. Lots of errors.

The 1914 complement for a Divisional HQ was 15 officers and 67 Other Ranks (ORs). The Division was commanded by a GOC (General Officer Commanding, usually a major general) who was assisted by several GSOs (General Staff Officers) who were responsible for training, intelligence, and planning and conducting operations. There were also the Adjutants and QMG (Quartermaster General) branch, which administered things like transport and supply as well as accommodation and managing personnel.

A division was meant to be able to fight a battle on its own, which meant it included all the necessary "bits" to fight. In practice, the huge scale and slow pace of fighting on the Western Front meant that divisions were grouped into Corps (pronounced "Corr"), which in turn were grouped into Armies. Corps and Armies also had separate artillery and logistical units attached to them.

By 1918 this structure had changed a bit. A Machine Gun Battalion was added, each Infantry Brigade was now only 3 Battalions instead of 4, and the Artillery and Engineers organisation had changed too.