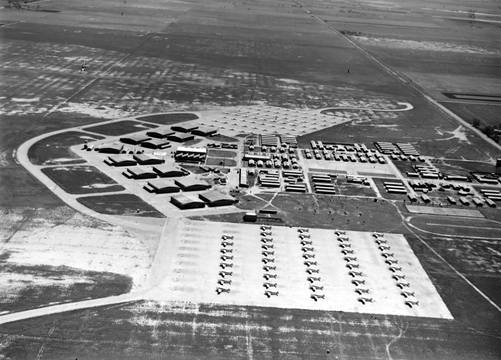 No. 6 Service Flying Training School (No. 6 SFTS) was formed at RAAF Station Mallala, South Australia, on 25 August 1941, under the control of No. 1 Training Group, as part of the Empire AIr Training Scheme (EATS).  Its inaugural commanding officer was Wing Commander N. Brearley.

The school was reported to have cost £233,000–240,000 to establish. Inclement weather kept the airfield out of action until 19 September, when the first nine Avro Ansons arrived. The initial course of flying training commenced four days later. Delays owing to rain, fog and high winds, however, remained a constant hindrance throughout the school's existence. In addition to Ansons, the school operated Airspeed Oxfords.

EFTS provided basic training to prospective pilots who, if successful, went on to an SFTS for further instruction that focussed on operational (or "service") flying. The course at 6 SFTS typically consisted of two streams, intermediate and advanced, for multi-engined aircraft, and included such techniques as instrument flying, night flying, advanced aerobatics, formation flying, dive bombing, and aerial gunnery.

The total duration of training varied during the war as demand for aircrew rose and fell. Initially running for 16 weeks, the course was cut to 10 weeks (which included 75 hours flying time) in October 1940. A year later it was raised to 12 weeks (including 100 hours flying time), and again to 16 weeks two months later. It continued to increase after this, peaking at 28 weeks in June 1944.

A total of 39 men were killed as a result of aircraft accidents while serving No. 6 SFTS at Mallala between 1941 and 1945. Fourteen Ansons and two Oxfords were involved in these accidents. The school suffered its last fatality on 27 March 1944, when an Oxford went down with its pilot.

The last course at No. 6 SFTS concluded in September 1945, by which time 2,178 pilots had graduated. The school disbanded on 1 January 1946, re-forming as Care and Maintenance Unit (CMU) Mallala. CMU Mallala was one of 40 such units across Australia responsible for the storage of surplus aircraft awaiting sale, scrapping or stripping for spare parts. From June 1947, the base facilities constructed for No. 6 SFTS were occupied by RAAF units supporting the Long Range Weapons Project at Woomera Rocket Range.

The facility closed in 1961.  The land was sold and a motorsports racing circuit was constructed taking the line of the centre road and a section of curved taxiway.

The following are crash sites linked to No. 6 SFTS.