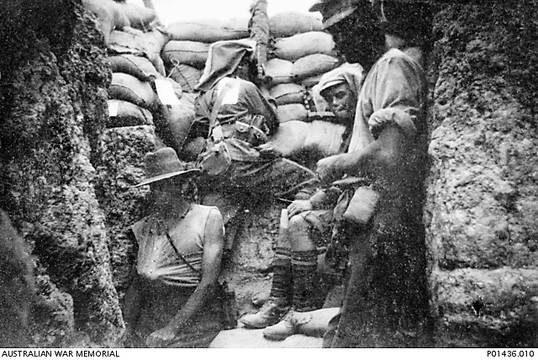 The 12th Battalion was drawn largely from Tasmania but about 50% of the unit was comprised of South and Western Australians.  Many of the South Australians were from the Port Pirieregion in that State's mid North.

The Third Brigade comprised Battalions from the smaller States. It was also destined to be the Covering Force (ie first ashore) at Gallipoli.  The Commanding Officer Lieutenant Colonel L.F. Clark was the first of a significant number of unit COs killed at Gallipoli.

After withdrawal from Gallipoli in December 1915, the Battalion served on the Western Front and participated in fighting at Pozieres / Mouquet Farm, the follow up of hte German consolidation at the Hindenburg Line, where two Victoria Crosses were won by Captain Newand and Sergean Whittle.  The abattalion then moved with its parent Boirgade to Belgium and Third Ypres including Menin Road, Polygon Wood,  and Passchendaele.

In 1918 the Battalion along with the rest of the 3rd Brigade spent a lot of time in the Flanders area and countered the German April offensive in the Lys, Hazebrouck and Merris sectors.  It took part in the "Last Hundred Days" offensive after being brought south to the Somme.  After fighting near Albert, the Battalion was involved in the final battles of its war around the Hindenburg Line / Epéhy . Operations finished in late September 1918.

In total, the 12th Battalion was awarded 247 honours and rewards for service in the field, incuding 2 Victoria Crosses. During the course of military service, 1,135 men of the Battalion were killed in action and 2,422 wounded.