“There’s a small deserted Mission in the north of calm Milne Bay,
When at eventide the shadows creep, and one can hear them say:
‘We are the dead, the glorious dead, who stood in Nippon’s way;
We took the brunt of his attack and caused his hopes to stray.’

The whispering breeze is heard again: ‘Spirits, who are ye?’
‘We are those that fought and fell at the Battle of Milne Bay.’
The fitful breezes part the palms so that the moon can see
The silent row of crosses at the foot of every tree.

Milne Bay, located on the south-eastern tip of Papua, had become an important Allied base in 1942. It provided a sheltered harbour, and was home to three airstrips and a radar station. These factors were why it was so highly sought after by the Japanese, who intended to use it as an intermediary stronghold on their push toward Port Moresby. 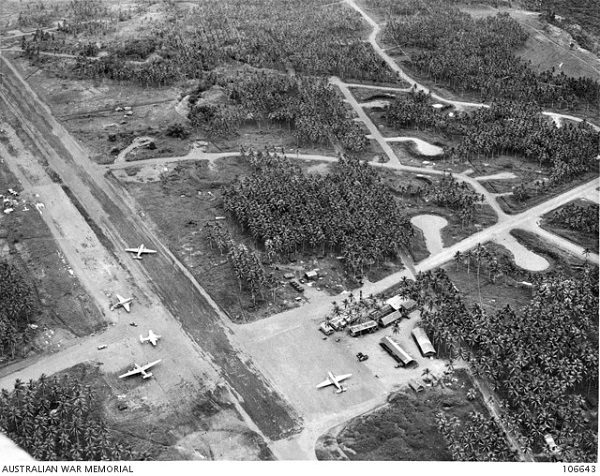 The Allies were well aware of Milne Bay’s importance, and by August, 7,459 Australian troops from 7th and 18th Infantry Brigades and 1,365 American troops were stationed there.[i] Japanese intelligence seriously underestimated the strength of the Allied force, and sent only 2,000 marines to try and capture the base. They also had trouble landing. The 75 and 76 Squadrons RAAF harassed the Japanese troopships in their P-40 fighter bombers, causing them to drop 11 kilometres east of their intended landing point.

In spite of these miscalculations, it was the Japanese who saw initial success on the 25th of August. Aided by their light tanks, they advanced through the front-line Australian units, comprised of the hardened 2/10th Battalion and inexperienced 25th and 61st Battalions. They were forced to withdraw, and by August 27th, the Japanese had reached the edge of No. 3 airstrip. The intensity of their advance halted as they were reinforced by 800 soldiers.

The reinforced Japanese troops charged the airfield defences, manned by the 25th and 61st Battalions, in the early hours of August 31st. Here, the new Militia formation proved their worth, holding strong and dealing heavy casualties to the Japanese with machine gun and artillery fire. Some 300 Japanese men were killed, and by dawn the next morning, they had withdrawn.

Australian Major General Cyril Clowes saw the opportunity for counterattack, and the 2/12th Battalion were ordered to pursue the fleeing Japanese.[ii] The 2/9th were sent in support soon thereafter, and the two battalions stalked the Japanese along the north shore of Milne Bay. It was during this period, on the 4th of September, when Corporal John French single-handedly destroyed three Japanese machine guns. While the other members of his section took cover, French disabled two of the machine guns with grenades and destroyed the last with his own submachine gun, and also killed each of their operating crews. When the shooting ceased, the members of his section found him dead on the edge of the gun pit.[iii] He was posthumously awarded the Victoria Cross, the citation stating that “his cool courage and disregard of his own personal safety…saved members of his section from heavy casualties and was responsible for the successful conclusion of the attack.”

There are countless other accounts of bravery during the Battle of Milne Bay. Captain Geoffrey Ronald Miethke from Woodville was awarded the Military Cross for his “outstanding courage and powers of leadership”[iv] while he and his company fought off enemy tanks and infantry who had them completely surrounded. Private Albert Joseph Abraham from Semaphore received five bullets to his legs as he repelled countless Japanese attempts to get past him.[v] He lost consciousness and was mistakenly left behind when the platoon withdrew. The following morning he was found, having killed a further 6 Japanese overnight.[vi] He was awarded the Distinguished Conduct Medal for his gallant stand.

The Japanese were ordered to withdraw on the 5th of September. By the morning of the 6th, the Australian force had reached the Japanese withdrawal point, and fought some minor actions against the stragglers.[vii] For months later, the remaining Japanese troops attempted to escape overland to Buna. As many as 350 evacuees were left stranded on Goodenough Island after their barges were destroyed by Allied action, and were not rescued until early October. 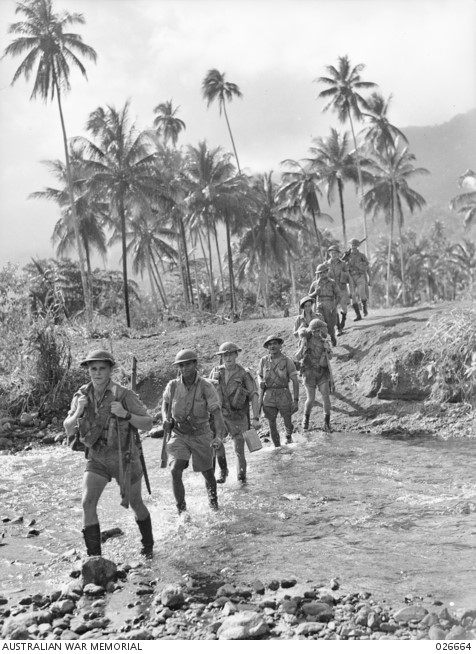 167 Australian and 14 American troops were killed during the Battle of Milne Bay. A further 206 Australians were wounded. The Japanese suffered far worse. It is estimated that as many as 750 were killed, with many hundreds more injured. Only 1,318 of the 2,800 Japanese troo ps were evacuated. Milne Bay remained an important staging area until September 1943, when other victories in Papua New Guinea made more suitable areas available to the Allies.[viii]

The accomplishments of the Australians at Milne Bay cannot be understated. They were the Allied battalions that caused the Japanese their “first undoubted defeat on land,”[ix] breaking “the spell of Japanese invincibility.”[x]