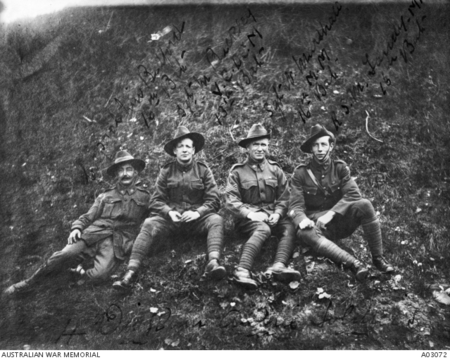 The Colour patches of the 4th Brigade initially conformed to the 1st Division protocol, but with their later allocation to the 4th Division,  the logical and sequential numbering sequence  and the colour patch assignment of the AIF - the most logical in the history of the ADF, was upset!   The rectangle signified the First Division.  The dark blue lower half indicates the fourth brigade of the 1st Division.  The upper denotes the ‘order’ of the four battalions in the brigade; being the fourth, the 16th Battalions upper half is white.  When re-assigned to the 4th Division, which adopted a circular-shaped colour patch, the 4th Brigade retained its original rectangular patch (and for the veterans of ANZAC, the coveted 'A' motif - see related story).

On August 4 1914 Great Britain declared war on Germany. Australia quickly followed the Mother Land’s call to arms. A rush of volunteers flocked to the capital cities to enlist.  Men were despatched from Perth and Adelaide to Melbourne where the new 4th Brigade was forming.

They were assembled equipped and trained (many had served in the militia so army drill, shooting and field exercises were not new to them) and by late October the Great Convoy began assembling in ports around the country departing over the period 15-25 October 1914 bound initially for Albany in Western Australia to concentrate and pick up their escorts before crossing the Indian Ocean for the Middle East.  The 4th Brigade had to wait for more shipping so they did not depart Australia until December.

By  the time they arrived in Egypt in February it had been decided to conform to the British three brigade per Division structure,  and to form another Division, designated the NZA Division, to which the 4th Brigade was added along with the New Zealand Infantry Brigade, the New Zealand Mounted Brigade and the 1st Australian Light Horse Brigade (four rather than three Brigades although the Mounted units were not as big).

The 4th Brigade and its constituent units landed at Gallipoli and entered the line in early May, and  took part in the Defence of ANAZAC from May to July.

In the August Offensive, while the 1st Division attacked Lone Pine,  the NZA Division was charged with the capture of Sari Bair and Hill 971.  The 4th Brigade's fortunes were not to be favourable.  The steep and rugged terrain, a night approach march, no navigation aids and non-existent communications resulted in the Brigade becoming disoriented and early morning light found a portion of the Brigade caught in the open in front of forward Turkish machine gun posts.  While Sari Bair and Hill71 were briefly held, the arrival of Turkish reinforcements forced them off and the attack languished.

The 4th Brigade went on to serve throughout the campaign at ANZAC until the evacuation in December.

Following extraction to Egypt, it was split along with all of the Battalions in the 1st-4th Brigades to create the new Battalions of the 4th and 5th Divisions.  The 16th Battalion's 'pup' Battalion became the 48th Battalion in the 12th Brigade, also in the 4th Division, but with the proportion of South Australians raised to 50%..

The Battalion's first major action in France was at Pozieres in the Somme valley in July 1916. After Pozieres and Mouquet Farm,  the 16th Battalion fought at First Bullecourt on 11 April 1917 and along with the rest of the 4th Division, sustained heavy casualties despite breaking in to the German defensive line.  Supporting tanks failed and there was only limited artillery support, because the advocates of armour had convinced the higher command that the tanks would achieve surprise without artillery preparation.  As they didn't even get to the start line on time in the first instance, and then after the attack was postponed they were all neutralised quickly and the German defensive barbed wire belts in front of their positions had not been cut - again.  During the course of this Battle one of the legends of the AIF , Major Percy Black, of the 16th Battalion, was killed on the German wire.

Reinforced and recovered from the travails of Bullecourt, the 4th Division relocated to Flanders, and together with the newly arrived Third Division they and the New Zealand Division formed the right flank of the attack on the town of Mesen (Messines). It was to be the second Allied success on the Western Front following the Canadian victory further south at Vimy Ridge in April. It was a text-book application of the 2nd Army Commander(General Sir Herbert Plumer)’s ‘bite and hold’ tactics following a series of massive synchronised mine blasts which completely disrupted the German front line. The 4th Division then re-set for participating in the great 'Third Ypres' offensive.  Intended to clear the enemy from the high ground around the city, it was initially successful with victories at Menin Road, Polygon Wood (in which the 4th Division played a key role) and at Broodseinde Ridge, albeit with heavy casualties.  However all momentum was lost and the offensive ultimately foiled by the onset of torrential rain and the mud and misery of Passchendaele.

After spending the winter in Flanders, all hell broke loose on the 21st March when the Germans launched a 'make or break' offensive primarily directed at the British 5th Army between Arras and the Somme.  The AIF was rushed south to plug gaps in the crumbling British line.    The AIF was 'penny packeted' across the Front  - Brigades were detached from Divisions  in trying to stiffen Allied resistance.  The 16th Battalion and the rest of the the 4th Division, less the 4th Brigade which had been detached to defend near Heburterne north of Albert, was tasked to defended north of the railway embankment at Dernancourt.

Both elements played a critical role in stopping a German break through towards Amiens, the key German objective on this part of the Front over the period 28 March – 5 April 1918.

In early July, the 4th Brigade was the 4th Division’s contribution to the AIF’s demonstration of Combined Arms tactics at Le Hamel, with the 16th Battalion clearing Kidney and Pear Trench in the initial phase of the attack on the approach to the village of Le Hamel to the west of the village. A minor re-set took place ahead of the Great Allied offensive, the "Last Hundred Days" campaign beginning on the 8th August 1918 when the Battle of Amiens erupted across the front.

After taking part in the spectacular advance of the Australian and Canadian Corps south of the Somme, The Battalion along with the rest of the AIF, was resting 'out of the line' when the Armistice was declared on the 11th November 1918.  The long process of repatriation and demobilisation began.  For many, re-settling into civilian life after the turmoil of the battlefield was not a straightforward process.