By mid August 1915, the Allied ‘Second Thrust’ had failed to achieve any of its objectives apart from the 1st Australian Division at Lone Pine.

Importantly, nothing had changed strategically.  Neither side had the superiority of numbers required to carry off a major attack on defended positions on the scale required to achieve a decision.  This ‘mathematactical’ dilemma had characterised the campaign from the outset.  It was an established principle that an attacking force needed to outnumber the defenders by a ratio of at least 3:1 to have much chance of success.  Neither side ever achieved it, and a tactical stalemate resulted.

Much of the firepower of the Royal Navy was masked by the terrain.  The big ships’ Armour Piercing (AP) shot was a lot less effective than the shrapnel shells of the field artillery, so it was not the combat multiplier that had been hoped for.  In effect, it had barely compensated for the Allied paucity of effective artillery.

One last throw of the dice was then conceived, to ‘join up’ the positions at Anzac with Suvla Bay.  It was to be at a place called Hill 60.  The paradox is this terrain had already been traversed but not secured during the course of the 4th Brigade’s move into the foothills north of Sari Bair.  By mid August it had been well and truly secured by the Turks.

The remnants of the 4th Brigade, who had fared poorly during their attempt to take Hill 971 on Sari Bair, would be joined by newly arrived troops of the 2nd Division's 5th Brigade.  Later, what was left of the 3rd Light Horse Brigade, so grievously mauled at The Nek, would join the fight.  This time the 9th Light Horse Regiment, with a new Commanding Officer, would play a more prominent role, its sister Regiment the 8th Light Horse Regiment, and to a lesser extent, the 10th having been rendered largely ‘hors de combat’ after their losses at the Nek.  The 10th Light Horse was however to figure prominently towards the end of the fighting at Hill 60. 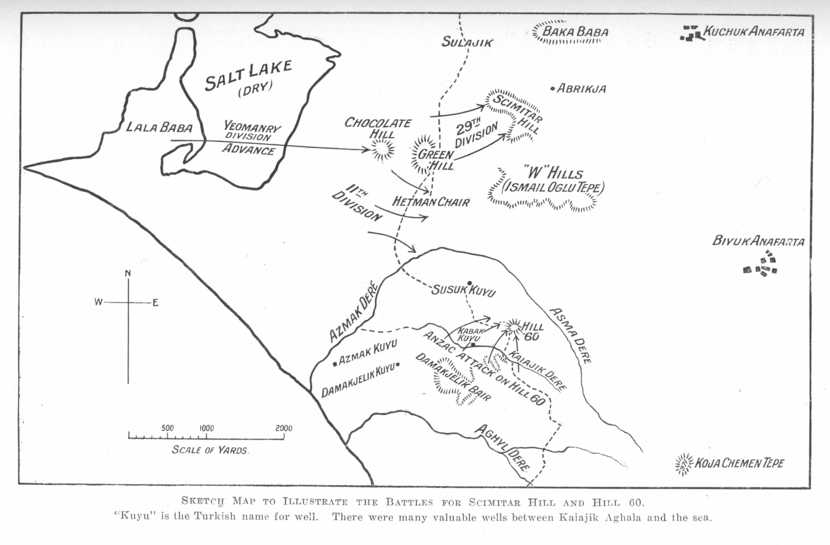 The attack on Hill 60 occurred over the course of a week, from 21-28th August.  From an Australian perspective, it took place in two phases.  The 4th and 5th Brigade were committed first, and later the 3rd Light Horse Brigade.

The Hill 60 battle is perhaps the least researched and understood of the various actions at Gallipoli.  Rather than trying to recount here what was a confused and poorly coordinated series of actions, the reader is directed to other bodies of work that do this in detail:

A DVA piece focussing largely on the 5th Brigade can be viewed here.

At 11.30 pm, Lt Col Carew Reynell and 140 of his 9th Light Horse charged alongside the trenches held by the New Zealanders toward the summit of Hill 60. Exactly what happened to the South Australians and Victorians of the 9th that night will never be known. Whether they lost their way or were driven by rifle fire and bursting bombs, they veered to the left. They ended up arriving in D-C Trench in small groups. Reynell and his men took the trench and fought until killed by counter-attacking Turks.

The 9th Light Horse lost their second CO in just three weeks, 40 men killed and scores wounded, in exchange for a few yards of trench. As a New Zealand soldier had observed “land is very dear here”..Carew Reynell.

The sacrifice of the Reynell family did not end with Carew.  His only son, Richard, became one of the ‘very’ Few (Australians flying with the RAF) during the Battle of Britain 25 years after his father’s death. He died flying a Hawker Hurricane with 43 Squadron RAF on 7 September 1940.

The 10th Light Horse, depleted by the futile attack at the Nek, joined the fight.  One of them, Hugo Throssel, won the only Light Horse Victoria Cross of the War, in circumstances very similar to those of the seven awarded at Lone Pine.

An extract from the AWM article on Hill 60 by Brad Manera describes Hugo Throssell’s role.

The most threatened position was the eastern end of the trench held by 2nd Lt Throssell and a small band of Light Horsemen, including Squadron Sergeant Major Henderson, Corporal Ferrier, Lance Corporal MacNee and Troopers Renton and Stanley. They stood behind a flimsy wall of sandbags and held back assault after assault along the trench from the east or through the scrub from the north. Throssell, in a letter to Ferrier's mother, tried to recreate the scene:

“The Turks are fine fighters and extremely brave men, and all that night they stood one side of this barrier within five yards of us trying to bomb us out. … I have just casually mentioned that the Turks counter-attacked three times; that does not sound very much, but I can assure you that with the Turks within 5 yards of you with only a couple of feet sandbag barrier between, and with hundreds of them coming at you with fixed bayonets in the front, the chances of coming through that ordeal alive are very remote”