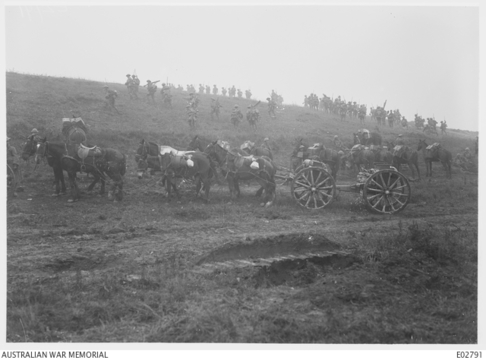 The 15th Brigade formed the third Brigade of the 5th Division and was raised mostly in Egypt in March / April 1916 as part of the "doubling of the AIF." This was done by splitting the 2nd Brigade in the 1st Division and seeding the new Brigade with experienced officers, NCO and men complemented by reinforcements fresh from Australia.  The 'pupped' Brigades and Battalions reflected the origins of its 'parents'. As the 2nd Brigade, which helped make the 15th Brigade, was an all Victorian Brigade the 15th Brigade was thus also an all Victorian Brigade.

Thus the Battalions of the Brigade were thus:

After journeying across the Mediterranean Sea and the via train from Marseilles to Armentiers, the 5th Division spent time in the tenches near Fromelles were it sustained heavy casualties. It spent most of 1916 and early 1917 recovering from it losses but its second engagement was at Bullecourt in April 1917, followed by Polygon Wood in September 1917.