This article was very kindly supplied to us by Colonel Peter Scott, DSO, CO 3RAR 1969-72, and introduces us to the battalions that history has forgotten.

13 cadets and I had graduated from the Royal Military College on 15th December 1948, commissioned Lieutenants in the Australian Staff Corps and allocated to the Australian Infantry Corps. After a short post graduate course at the School of Tactics and Administration located in Seymour Victoria, we would all finally, in dribs and drabs, arrive in our first posting to the 3rd Battalion, Royal Australian Regiment (3RAR) based in Hiro, Hiroshima Prefecture, Japan. 3RAR was one of the three battalions which formed the newly created Royal Australian Regiment.

I, along with Lieutenants John Murray Church, David John Mannett and Alf Argent (all three deceased) were the first group to arrive on 17 March 1949 and immediately put to work. We all became the unit ‘Duty’ officer within days of arrival. A sobering and scary 24 hours the first time.

The battalion was still in 67th  Australian Infantry Battalion mode with everyone wearing the shoulder flash LXV11 (67) Gold letters on red background at the top of each sleeve, BCOF badge and the 67th Battalion  Badge on cigarette boxes (on right1), pocket badges (used on sports jumpers) and plaques. 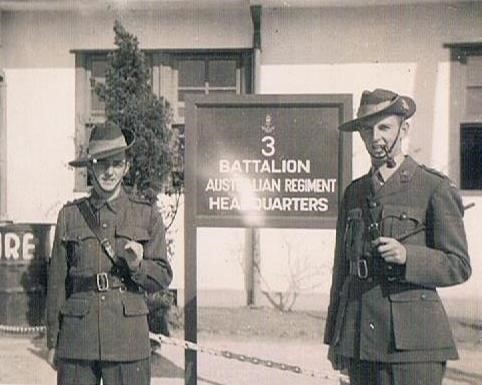 Alf Argent and me next to the battalion sign before the title ‘Royal’ was added. I am not sure of the badge but presume it to be the 67th Battalion badge because the RAR badge was not produced until 1954.2 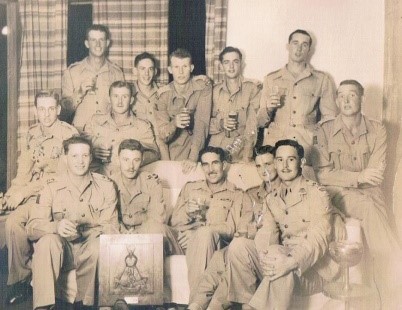 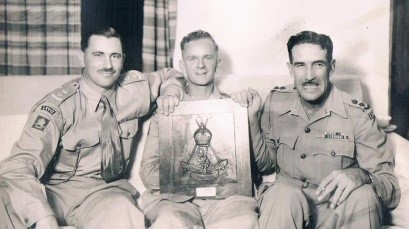 This photo taken on 11th  August 1949 during the handover of the battalion from Lt Col Ken McKay, MBE, on the right to Lt Col Floyd Stanley Walsh, far left with Capt J J Thomson in the centre all holding the 67th  Australian Infantry Battalion plaque. Note also on the right sleeve of Lt Col Walsh, a green lanyard, the LXV11 flash and BCOF badge.

Having served in 3RAR in Japan, Korea and Vietnam during the years 1949 to 1972 and subsequently as a member of the 3RAR Association/Corporation and 3RAR SA Association I have been fully indoctrinated with the formation of the 67th Battalion, (and 65th and 66th Battalions) in Moratai in October 1945 to form the 34th Brigade to become part of the British Commonwealth Occupation Force (BCOF) in Japan.

There was never any mention of these numbered battalions being formed in WW1 so I was very surprised when I was leisurely reading a book I had recently purchased titled ‘Combat Colonels of the AIF in the Great War’ by David Clare Holloway.3 Eventually I came to Page 190 and the details of the Proposed Formation of 6th Division with the 16th and 17th Brigades. The latter comprised the 65th, 66th, 67th and 70th (attached) Battalions.

The proposed 6th Division was in response to increasing demand for more divisions at the front and was approved by the Federal Government on 15 February 1917. The division’s brigades, the 16th, 17th and 18th were to be formed on the same state basis as the five existing divisions.

Appointments were made to brigade and battalion headquarters with COs appointed from officers convalescent or resting in England. Divisional Headquarters was not formed and it would appear only the 16th and 17th Brigades and their battalions were actually formed and located in Number 3 Camp, Parkhouse, Salisbury Plain commencing on 21st March 1917.

The battalions comprised officers, NCOs and soldiers from each of the five divisions and personnel in France. The brigades and battalions of 6th Division were all allocated colour patches, in an oval shape divided vertically with the left half  ‘Brown’ and right half Victoria’s ‘Red’ for the 3rd battalion of the 17th Brigade, e.g. the 67th Battalion.4

67th Battalion was formed on 25th April 1917 and disbanded on 16th September. During it’s nearly five months existence 39 officers and 928 ORs were posted to the unit and formed into BHQ and four rifle companies. Lt Col Thomas Flintoff was transferred from the 47th Battalion to be appointed CO.5

The 6th Division’s war diary written by the battalions describes brigade and battalion exercises, route marches, trench digging and live firing amongst other training, interrupted by bad weather many times during those five months.

Orders were received on 15 September for demobilisation. The heavy casualties in France in 1916 and 1917 created the more urgent need to bring existing divisions up to full strength and the proposal was abandoned in September 19172. At this time the brigade strength was 151 officers and 2990 ORs of which 34 officers and 537 ORs were from the 67th Battalion. All members were then returned to their original units.

I think that the existence of 65th, 66th and 67th Battalions of the 17th Brigade for five months in 1917 justifies an acknowledgement in the history of the Royal Australian Regiment. The fact that these battalions never were engaged in war operations in France does not in any way cancel their very existence. They are therefore in the army’s historical records, will always be there and should be recorded in present unit histories particularly during the centenary of the First World War and not ‘forgotten’ as they are now.