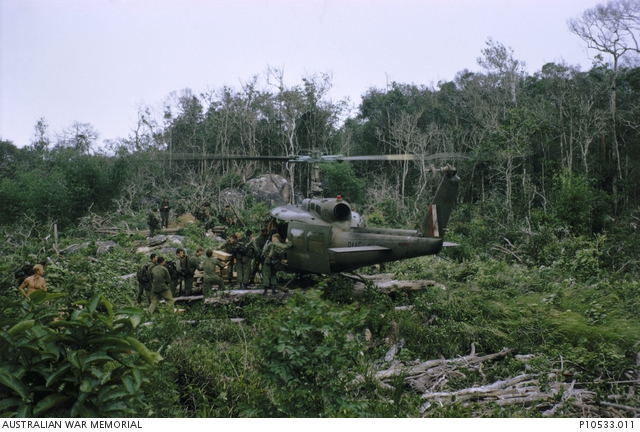 A helicopter resupply of the 5th Battalion, The Royal Australian Regiment (5RAR) on a fire trail at the Warburtons Area of Operations (AO), in the Nui Thi Vai and Nui Dinh mountains, c. May 1969. Australian War Memorial P10533.011

I’m not sure about exact dates or locations, as my memory is not what it should be.

This deployment was the second stage of OP ESSO, conducted in Phuoc Tuy Province from 15th June - 15th July 1969.  I was a section commander in 6 platoon. The platoon was dropped by chopper on the edge of AO Manus and proceeded on foot into another area called AO Vanimo.  Route 15 ran N to S through the middle of the AO.

The village of Phu-My 5 was about 3 or 4 clicks south of where we crossed the highway.  We proceeded west until we hit the Song Thi Vai River about 5 clicks from Phu-My.  When we arrived we set up the ambush site at the river crossing.  At low tide the water is about waist deep.  There was open ground on the other side of the river for about 50 metres or so; it was a very good ambush site as we also had the high ground.  I’m not sure about the time of day but I think it was mid morning by the time we got set up.  We sent out a few recon patrols during the day but none came come back bearing any fish or prawns so it looked like another rations pack night.

Our Platoon Commander was a national serviceman called Bob Hutchinson.  We all liked him as he was a good bloke and had been a bushy.  The platoon was under a lot of pressure at the time as I think we only had 1 enemy killed to our credit at that stage.  We were copping plenty of stick from the other platoons at the boozer.  We were known as the ‘Virgin Soldiers’. I know for a fact that our Platoon Commander was under tremendous pressure to lift the kill rate; there was talk of replacement if he (we) didn’t lift his game.  We and the rest of the company knew that was unfair as the platoon had worked hard all tour, just in or out of luck depending on how one viewed it.

Meanwhile back at the ambush site we were kept entertained by Cobra gunships flying up and down the river over-watching sampans. The yanks were training the South Vietnamese pilots to fly Cobras and were using the airstrip near Phu-My 5.

I’m not sure of the time but it must have been close to curfew; next thing 30 and 50 Cal’s opened up from the APC’s then it was action stations all round.  My radio started crackling, it was the APC’s down the river.  They said they had opened up on two Viet Cong with packs on their back and carrying rifles and heading our way.

Well we were ready, we had waited all day for this, there were two sections of us.  Everybody was on this high bank; no one was going to miss out.  Every weapon we had was on that bank, some blokes even had grenades at the ready.  The kill rate was about to go up.

We lay there, it seemed to take hours, but it must have only been 10-15 minutes then we could hear them coming.  No sight of them yet, just the noise of running.  Then into the clearing they ran about 50 metres away.

The Boss had given us instructions earlier, ‘wait for my order’.  At this stage they were just about to enter the mud close to the platoon.  The tide was low the mud was about 3ft deep.  By this time we could clearly identify them.  The Boss waited until they were in the middle of the river then he jumped up and yelled out “Dung-Lai” which is stop in Vietnamese.  Well they stopped as if they were shot.  One bloke had his foot out of the mud about to take another step but left it in mid air too petrified to move.  The look on their faces I’ll never forget.

They were just bloody fishermen; the packs and the rifles they were reported to be carrying were heavy fishing baskets and fishing poles.  They were just two elderly fishermen from Phu-My 5. Well it goes to show how easy it would have been for us to just open up on them and just forget about it.  It’s been done before, I remember what happened at Mi Lai.  Discipline and good leadership skills prevented a massacre that day.

The boys pulled them out of the mud and brought them back up the top and we started to interrogate them but they were still too shit scared to open their mouths so we didn’t get far with that idea. We worked it out later the distance from 3 Cav to us and the time it took the two fishermen to reach us they were a touch over 4 minute mile rate but I guess 50 Cal’s make you run fast.

We tied the two poor buggers together with toggle ropes for their own protection, and proceeded to distribute the fish and prawns to the Diggers. An order came from the catering section 2IC Boong Errington, that ration packs were not to be used that night as we had a shit load of  fresh fish we had to use that night.  We could have fed all B Coy and still had some left over.  While eating our prawn cocktail the Boss worked out that those two poor buggers must have been doing about 25 miles per hour to reach us in the time they did.  Not bad with about 30kg of fish on your back.

Next morning we woke to the shocking smell of left over fish, it was worse than the Vung Tau fish market.

After a brew we headed in to Phu-My 5 with our two very grateful fishermen who were starting to get a bit chirpy now they new they were heading home.  Half a click from the village we were met by a large group of people going out to find the lost fishermen or what was left of them.  When they saw that we had them safe and well the celebration started.  The closer we got to Phu-My the bigger the crowd.  By the time we arrived all of bloody Phu-My was there.  It was like a bloody Moomba parade; the kids were running around saying ‘Uc Dai Loi No. 1’. [Uc Dai Loi = Australia]

Everybody had a smile on their face, it was a bloody good feeling to be a part of that.  Well we left the fishermen at the ARVN compound, jumped on the choppers and headed for Nui Dat, wiser but feeling good.

Uc Dai Loi was certainly No. 1 that day.