Victory in the Pacific 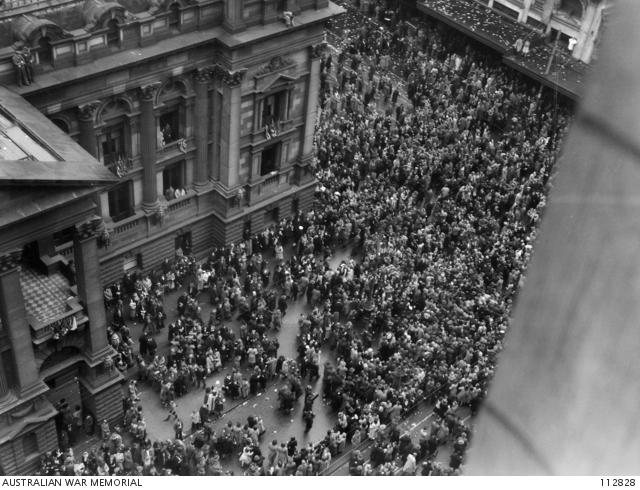 15 August 1945: One week after the United States of America dropped atomic bombs on Hiroshima and Nagasaki, Japan acceded to the allied demand of unconditional surrender. Prime Minister Chifley’s announcement focused on remembering those who had been lost and the Pacific theatre had certainly claimed its fair share of lives.

Click here to listen to the announcement, or here to read the full transcript.

1942 would prove one of the most difficult years for Australia in the Pacific theatre. The Battle of the Beachheads in November claimed 1,300 Australian lives. The Battle of Milne Bay, while ultimately a success for the Allies, exacted a high price from the 61st and 2/10th Infantry Battalions. The campaign along the Kokoda Trail,1 which would become an iconic an event in the public consciousness of World War Two, ultimately cost 625 Australian lives, with a further 1,600 wounded and over 4,000 casualties resulting from sickness. During 1942, six ships were lost including HMA Ships Perth, Yarra, Vampire, Canberra, Voyager and Armidale.

From February 1942 until September 1943, Australia found itself under attack, with 97 Japanese raids carried out along the northern coast. Air raids resulted in significant loss of life in Darwin, 235 killed and 300-400 wounded, with 70 killed in Broome, the eastern suburbs of Sydney were shelled by Japanese submarines and the lives of 60 merchant seamen were lost in the shelling of Sydney Harbour.

Footage of the Bombing of Darwin, 1942, Australian War Memorial

1943 also saw the beginning of the construction of the Burma-Thailand Railway at Hellfire Pass, on which almost 10,000 Australians worked as Prisoners of War. The Australian Hospital Ship Centaur was torpedoed, with only 64 of the 332 crew and medical personnel on board surviving the attack. Australia’s key military involvement, in New Guinea, saw Tom “Diver” Derrick awarded the Victoria Cross.

The Borneo campaign, begun just four months before the Japanese surrender, resulted in more than 500 Australians killed, including Diver Derrick, and a further 1,400 wounded. Of the 30,000 Australians involved on Bougainville from November 1944 to August 1945, 516 were killed and 1,572 were wounded.

On VP Day 2016, we remember the service and sacrifice of all Australians in World War Two.