A Tale of Two Soldiers

Although 1916 was to prove an eventful year for Australians in the Great War, January was more often characterised by alternating boredom and revelry. This article follows the stories of two infantrymen, who were sufficiently prescient to leave behind them a detailed record of their experiences for those who seek to understand the reality for soldiers of the Great War. The war turned out very differently for these two men. Patrick Andreas Ohlstrom of the 32nd Battalion served from his enlistment in July of 1915 until his discharge in April of 1919. The service of William Alfred Spurling of the 10th and 50th Battalion was cut short when he died of septicaemia 16 August 1917. However, their stories in January of 1916 are not so very different.

While Spurling spent the first days of 1916 on the last days of his training at Morphettville, Ohlstrom and his company of the 32nd battalion were already in Egypt, having embarked in November 1915, and attempting to organise New Year festivities around the “shooting going on”.1 For Ohlstrom, it was the desert’s cold that made the greatest impression over the New Year period. The sports held on 2 January, had provided but a brief respite from the hard work and the “monotony” of the drill, with which the 32nd were all “fed up.”2

By the time Spurling and his company of the 10th set sail on 11 January 1916, Ohlstrom had already served sentry duty in the front line trenches at Suez. In the same line, he reports that they are expecting mail from home. The desire for news from home and the need to maintain that connection, however tenuous across the distances, occupied the thoughts of most soldiers. Although he was only just leaving port at Outer Harbour, Spurling was already noting the pain of separation.

While HMAT Borda was taking the 10th further from home, Ohlstrom was on sentry duty again with the 32nd and predicting an unpleasant time of it. Out on the Precinct portal, his thoughts turned once again to the coldness of the desert nights and the prevalence of pneumonia among the men.4 Five days later, Spurling too was thinking of the men in his battalion, albeit in a slightly different way. While making quarters after docking in Fremantle on the evening of 16 January 1916, Spurling and thirty others on board were ordered to take up a rifle and a bayonet and, thus armed, were sent ashore. Their mission, revealed to them only once in the port, was to round up about thirty soldiers from the ship who “were drunk and had run amok in Fremantle.”5 While it appeared some were actively resisting returning to the Borda, others had simply reached a stage of inebriation that prevented any comprehension of their own conduct. Spurling records the excitement.

Rough seas, shark watching and concerted efforts to turn the trip into a pleasure cruise occupied most of the men on board for the remainder of January. Gambling, boxing, wrestling, concerts and “parties of all kinds”, and “a picnic and general sports day” encouraged Spurling to remark, “[t]o see the boys you would never think they were going to war. It was very much a pleasure trip.”7 Less enjoyable necessities such as fire drills and the food were tolerated.

For Ohlstrom, in the trenches of Egypt, the opportunity for fun and games might have been less, still there was little sense of the horrors of warfare that both Ohlstrom and Spurling would experience in trenches of France. While Spurling was still at sea at the end of January, Ohlstrom’s last record for the month notes sight-seeing at Tel-El-Kebir after the 32nd’s move to Ismailia. The scene of the battle of 1882 in which Arab forces were defeated by British and Indian troops and Egypt redefined as a British Protectorate, captured the imagination of both Ohlstrom and Spurling when the 32nd and the 50th were camped at the historical battleground. In February, Ohlstrom wrote, “[w]e can see the old entrenchments of the ’82 battle where all the big men are buried. We dig up bones & c on the field & some gruesome sights are to be seen.” A month later, Spurling told a longer story.8 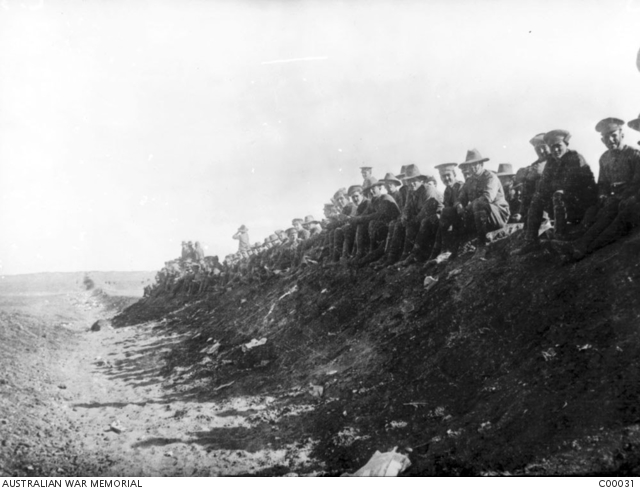 Unidentified Australian soldiers watch the review of the 1st and 2nd Divisions by General Sir Archibald Murray from the edge of a trench dating from the battle of Tel el Kebir in 1882. AWM C00031

In a few short months, as summer returned to the northern hemisphere, both Ohlstrom and Spurling would witness an awful slaughter first-hand, not in the Egyptian sand, but in the French mud. Neither would emerge unscathed from the ordeal, and only one would return home.

Do you have a diary of an Australian serviceman or woman that you would like shared with the world? We would love to hear from you. Please contact us at admin@rslvirtualwarmemorial.org.au.