THE BATTLE OF LONG TAN:

THE CONTEXT AND THE CONSEQUENCES 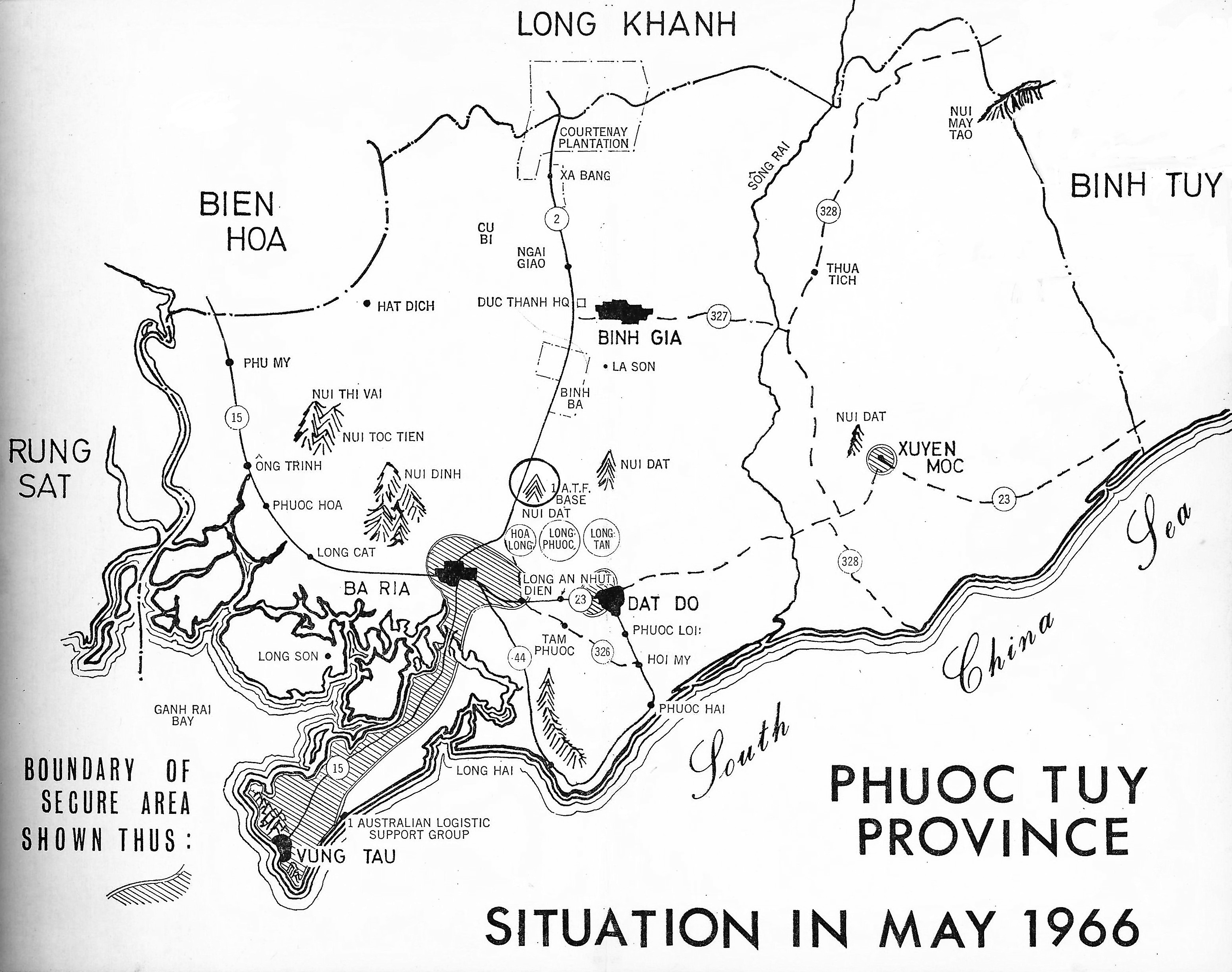 The battle of Long Tan was one of our first major tests of the Vietnam War. General Sir John Wilton, in 1966 the professional head of the Australian Army, had successfully negotiated for a separate area of operations to that of the Americans, before the First Australian Task Force was committed to the Vietnam War. In his thinking about the desirable characteristics of an area of operations, Wilton wanted to avoid one which shared a border with either Cambodia or Laos.  He also wanted easy access to a port for supply and support operations, and he wanted no US forces to be stationed in the Australian area. Wilton had clear memories of US Army tactics and high casualty levels from his time as a brigade commander in the Korean War. He saw the Americans in Vietnam as too inclined towards using heavy weaponry and seeking conventional battles. These could be costly, particularly in terms of Australian lives, and unlikely to prove successful in terms of defeating the Viet Cong and North Vietnamese. He believed that the Australian force needed its own territory in which to apply the carefully controlled doctrines of counter-insurgency that had been developed in Malaya in the 1950s and early 1960s. 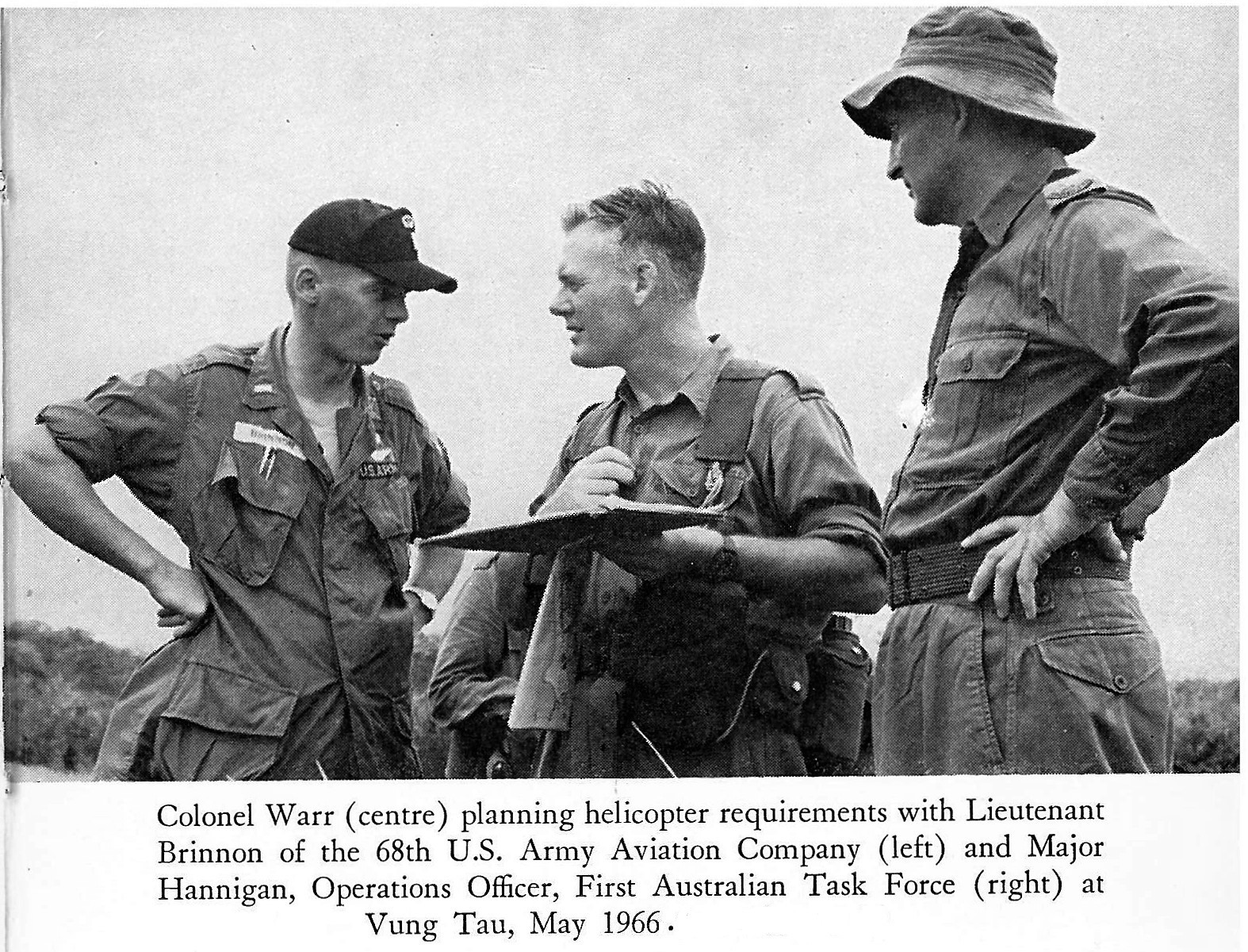 Phuoc Tuy also had no major US Army forces based there, and the few South Vietnamese units based there were weak and ineffectual. An Australian brigade could not therefore be easily picked up and placed under command of a US Division and sent on major strike missions across the country. Instead the Australians could get on with applying their own doctrines, in their own area, with no interference from the senior ally. Phuoc Tuy was also a long way from the Laotian and Cambodian borders (Figure 3). 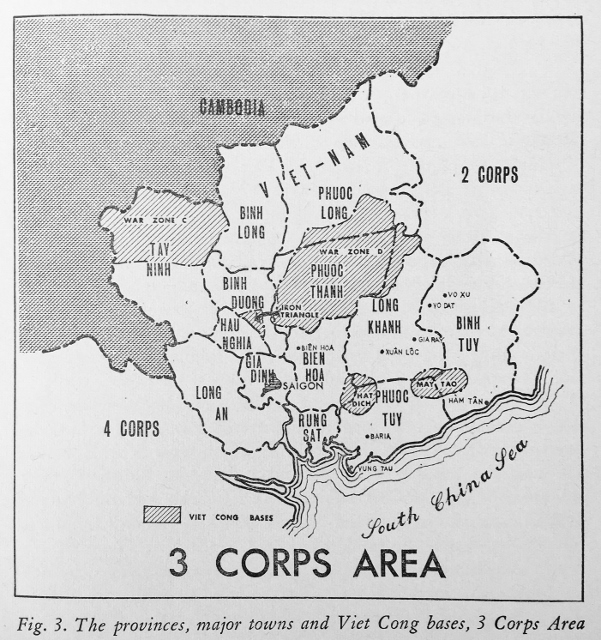 Having reached agreement with the Americans that Phuoc Tuy would be the desired deployment area, the next question Wilton had to face was precisely where in that province the force should be located. It would have been safe to station it close to Vung Tau, but Wilton was concerned that such an arrangement would have given the Viet Cong, based in the north of Phuoc Tuy, with support points in the centre of the province, easy access to the densely populated areas in the south. Therefore he chose the central area, which was sparsely populated, in which to establish the First Australian Task Force base, around a small hill named Nui Dat (or ‘bare hill’).

The main problem with this choice of location was that it was exposed to attack on all sides, and relatively remote from other allied army units should the Task force have needed support in defending itself. The probability of a major enemy attack had to be taken seriously. The northern part of Phuoc Tuy contained the base areas of two seasoned Viet Cong regiments, 274 and 275, each of three battalions. They were supported by a local force battalion, D445, whose members knew the province, its people, villages and geography well. They had a modest amount of supporting weaponry, particularly mortars and rocket launchers. Altogether they numbered some 2,500 men. We, in the First Australian Task Force, had two battalions of around 800 men each, and some 1,000 supporting troops. We were strong, but until we had tested the enemy in battle, we could not take our own invincibility for granted.

In the first phase of our occupation, June-July 1966, we could tell that our main positions were being reconnoitred by the Viet Cong at night. This discovery, unsurprisingly, gave rise to a certain amount of apprehension that the two main force enemy regiments, 274 and 275, were preparing for a major attack on us which would force withdrawal of the Task Force to Vung Tau or elsewhere. This apprehension fostered frequent rumours, some allegedly with intelligence backing, that ‘the big event would be on tonight’. This looming attack was known as ‘the Binh Ba 10,000’, named after the main village north of us which, from time to time, harboured large Viet Cong units. The figure ’10,000’ seemed to the rumour manufacturers to be appropriate for the hordes of attackers which might be mustered by the main Viet Cong formation in our part of South Vietnam, the Fifth Viet Cong Division.

Although this appellation demonstrated the famed diggers’ sense of humour, we were all worried about the possibility of a major Viet Cong attack, using those seven battalions that they had available in or near Phuoc Tuy. In the first few weeks of occupation we had little by way of prepared defences beyond weapon pits with overhead cover, protected command posts and barbed wire. By the end of July we were in much better shape to resist an attack and we could focus our efforts more on acquiring control over the jungle, plantations and rice fields which lay between ourselves and the main Viet Cong bases in the north-west and north-east of the province.

In some ways it was with a sense of relief that I greeted the spasmodic intelligence reports, which we received in mid-August, that a major Viet Cong force was massing to our north-east, and it seemed to be heading in our direction. This might be the great test. My battalion, 5 RAR, was six kilometres to the north, carrying out our first cordon and search of Binh Ba. The Nui Dat base was defended by but a single battalion, 6 RAR.

The battle of Long Tan was preceded by a Viet Cong mortar attack on Nui Dat on the morning of 17 August. The Commanding Officer of 6 RAR, Lt Col Colin Townsend, sent out a strong company patrol to investigate and clear the enemy away if possible. The result was the battle of Long Tan, fought on the following day. The details of the battle are best left to those who took part in it to relate. It was a heavy action. D company, 6 RAR, lost seventeen men killed, and we discovered later by searching the battlefield, that the Viet Cong (mainly 275 Regiment, which included a North Vietnamese Army battalion) lost at least 245 men. Whether the Viet Cong aim in this operation was to make a direct attack on Nui Dat or to make a demonstration which would lure out an Australian response is unclear. At all events, D Company gave an excellent account of itself.

What were the consequences of this battle? First and foremost, it looked as if the Viet Cong in the vicinity of Phuoc Tuy did not have the strength to drive us out of central part of the province. A single battalion, well trained and supported, should be adequate to defend our base, we reasoned. That was an important conclusion to have reached, but it had the negative implication that over half of our Task Force would have to remain in and around Nui Dat, leaving only a single battalion for operations outside of the base.

Second, having broken the main thrust of the Viet Cong attack, we could now reach out with our own patrols with greater confidence, and start to control the jungle and open countryside of central and northern Phuoc Tuy. We could break the hold that the Viet Cong had on the villages and people of the province. 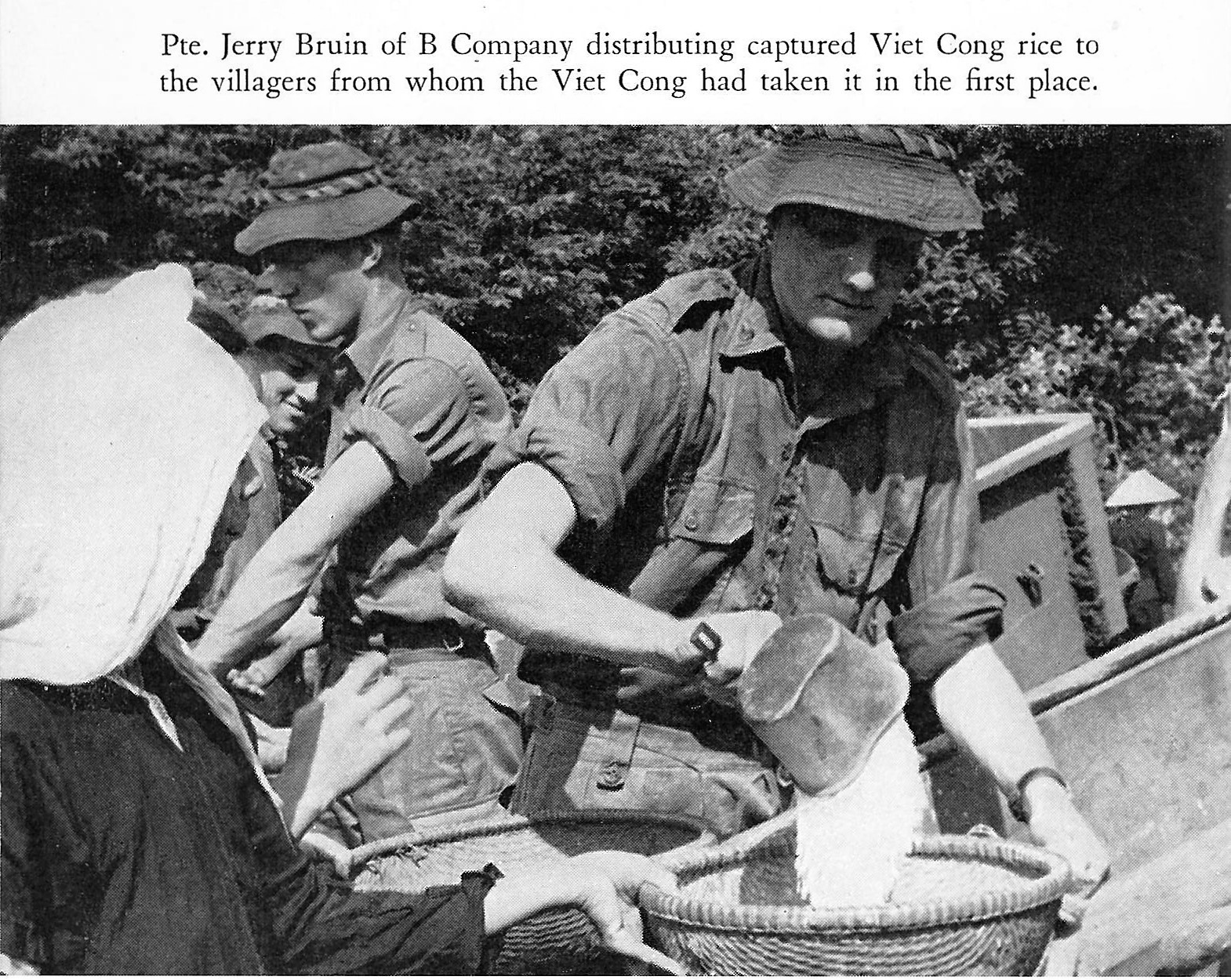 Third, having weakened the Viet Cong influence in the province, we could commence the most important phase of our operations: trying to win the support of the people by bringing them a more secure way of life, freeing them from the heavy taxation that the Viet Cong levied when they were in charge (both in cash and in goods), and commencing to build schools, dispensaries and irrigation systems where these were needed for their agriculture. We were able to re-open roads which had been closed when under control of the Viet Cong, tax collection points along the roads were removed, and the people of the province generally were more free to travel around, take their goods to market and buy in those same markets in the larger villages and towns, and re-establish social contact with friends living elsewhere in Phuoc Tuy. 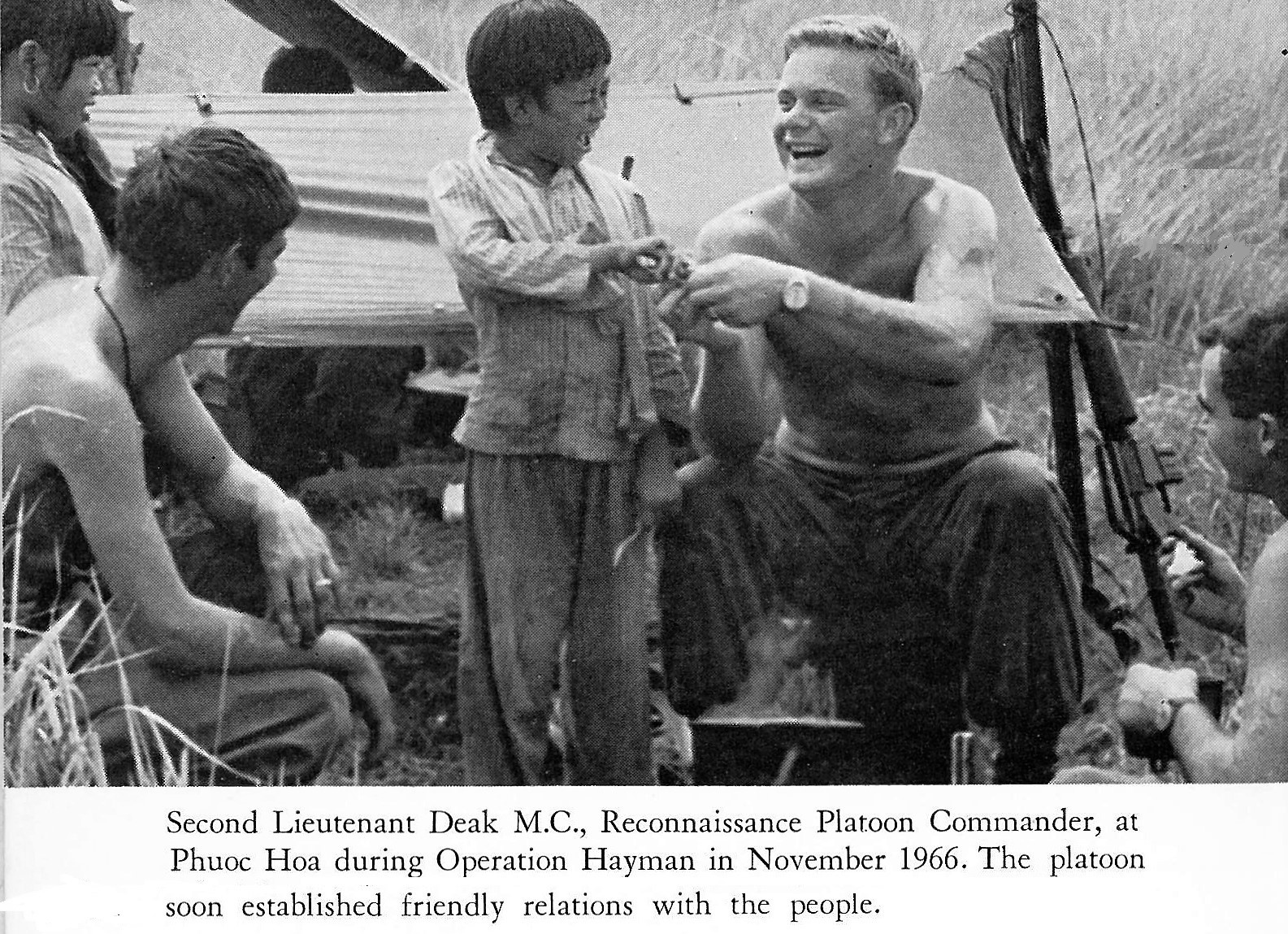 The victory at Long Tan increased our prestige. The word went around the province that we were not likely to be pushed out of the way by the kind of main force regiments that the Viet Cong had available. We would have a long term presence in Phuoc Tuy, so the locals needed to factor that conclusion into their own forward thinking. This meant that many of them became more positively oriented towards us, and therefore easier for us to work alongside.

This outcome was not just a result of the victory at Long Tan. We had to have the follow-up ideas and plans which would enable us to maintain our control in Phuoc Tuy and build lasting support for the South Vietnamese government. And this we did in the following five years. Unfortunately, the Saigon government was unable to play much of a role in this developing drama, and when the Australian Task Force was withdrawn at the end of 1971, conditions deteriorated fairly rapidly to what they had been in 1966. Successful counter-insurgency requires patience and a sustained effort.

Much of our success or lack of it, was determined by political conditions in Australia. What difference did the battle of Long Tan make in terms of public perceptions of, and support for, the Australian effort in Vietnam? This is a complex question, and many Australians alive at the time of the war would give different opinions. Some saw it as a morale-raiser and reputation enhancer. Others saw it as a slide away from classic counter-insurgency doctrines and towards the bloodier and more heavy-fisted style of operations that some American formations tended to conduct.

At all events, the significance of the Battle of Long Tan is still a lively issue, and it will be debated for as long as the Vietnam War as a whole, and Australia’s role in it, remains a hot controversy.

Robert O’Neill AO FASSA FAIIA has worked in the fields of international relations, history of war and strategic studies since 1961. He was Head of the Strategic and Defence Studies Centre at the ANU, Canberra, 1971-82, Director of the International Institute for Strategic Studies (IISS), London, 1982-87, and Chichele Professor of the History of War, All Souls College, Oxford, 1987-2001 and a Director of the Lowy Institute for International Policy, 2003-2012. He served in the Australian Army 1955-68, graduating from the RMC Duntroon in 1958. After studying for his Doctorate at Oxford as a Rhodes Scholar, he was mentioned in dispatches for his service as Intelligence Officer with 5 RAR in Vietnam, 1966-67. He wrote the official history of Australia’s role in the Korean War (2 vols.). He was awarded an honorary D Litt by the ANU in 2001.