This week's homepage article is brought to you by the wonderful staff and volunteers of the State Library of South Australia. They have spent the last few years digitising the significant South Australian Red Cross Information Bureau collection, which the bureau donated to the library in 1919. Their tireless work has uncovered many fascinating and poignant stories. With this article they would like to share with you the story of the Potter brothers. 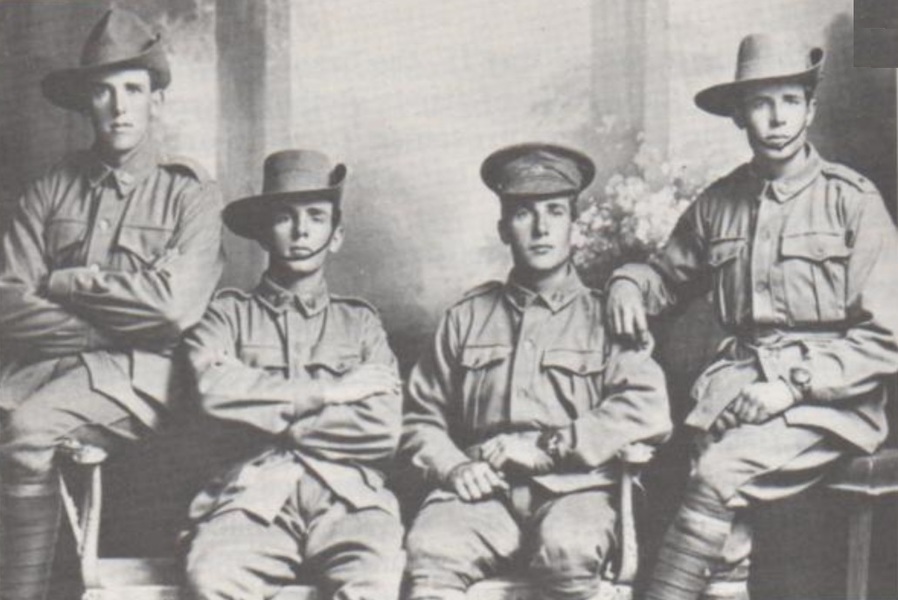 Ralph Victor Potter’s World War One experience spanned just two years, but during this time the young South Australian saw and experienced the worst of the conflict.

Ralph enlisted on 27 July 1915 at the age of 23 years, the first of four brothers from his family to do so. His brothers enlisted a few months later – Thomas James Albert on 15 September and Edward Wilfred and Hurtle Francis Constable on 21 September. All four brothers joined the 12th Battalion and were given consecutive service numbers 3738 (EW), 3739 (TJA), 3740 (HFC) and 3741 (RV).

Together, the brothers embarked for Egypt from Adelaide on the RMS Malwa on 2 December 1915.

March 1916 saw a reorganisation of the AIF known as the ‘doubling’ of the AIF. As a result the Potter brothers were transferred to the newly raised 52nd Battalion and then proceeded to the Western Front.

The Battalion arrived in France at the beginning of June 1916 and had its first major engagement at Mouquet Farm on 3 September 1916. The 52nd suffered heavy casualties, losing 50% of its fighting strength. Edward was reported killed in action and Thomas and Hurtle were reported missing in action.

The difficulty in confirming the fate of soldiers and communicating it with loved ones during wartime is evidenced by the fact that friends and family members heard no further details and wrote to the South Australian Red Cross Information Bureau to find out more. Bureau searchers interviewed Ralph in February 1917 and he gave a rather shirty sounding statement about his welfare and the fate of his brothers; presumably he did not know that information was not being received at home and he seems to be under the impression that at least one brother has been taken prisoner of war:

Yours to hand safely, but have nothing to report, as a moments thought would have told you I sent all news available home. No doubt if you apply to a Military enquiry office, you will get a prisoners list from Germany. Thanking you for expression of sympathy and kindness in making enquiries.

The Bureau writes to the enquirer:

Ralph was wounded in action in March 1917 suffering gunshot wounds to both legs. He was admitted to hospital in England in April. While in hospital applied for a discharge from the army writing:

I lost three brothers in the Moquet [sic] Farm stunt of September 3rd, 1916…Am sole support of father and mother both over 60 years of age and my youngest sister who looks after my mother. My parents are bearing up under the loss well, but it has broken them up. My mother has been suffering for years and my father although working suffers a great deal as he was badly ruptured lifting a big stone about 7 years ago and cannot walk too well…Have not applied before as I though you needed men badly so stuck at my work, even refusing place in the R.Q.M. Stores that I might go in the line with the boys, but now that America is in with us I thought you may be able to let me go…Have now been wounded in right thigh and through right leg

In July 1917, it must have been made plain to Ralph that those at home did not know the details of what had happened to his brothers. The horror Ralph and his brothers had endured is apparent in the statements Ralph gave about his brothers’ fates.

He was not an eyewitness to Thomas’ death but stated:

He was seen walking back to the dressing station, but never reached it. Feel quite sure he was killed that morning.

Distressingly, he was right with Hurtle at the end:

I saw him killed at Mouquet Farm shot through the head, death instantaneous. I was beside him when he fell down, he never moved.

And tragically, he came across Edward’s remains some months later:

I found letters and proof of his identification in his gas helmet alongside of his decomposed body at Moquet [sic] Farm March 25th 1917. The bodies were being gathered at that time. No doubt his remains would be buried.

Ralph returned to Australia on the hospital ship Benalla which sailed August 1917 and arrived in Melbourne on 24 October 1917. His mother Eliza died on 20 December 1917 and his father Benjamin then lived with Ralph at Wilmington, South Australia.

Ralph married Grace Turner Wright (daughter of William Jabez Wright) on 17 March 1926 at the Methodist Church, Quorn. He died in Howard, Queensland, on 21 May 1961, aged 68 years.

More information about these soldiers