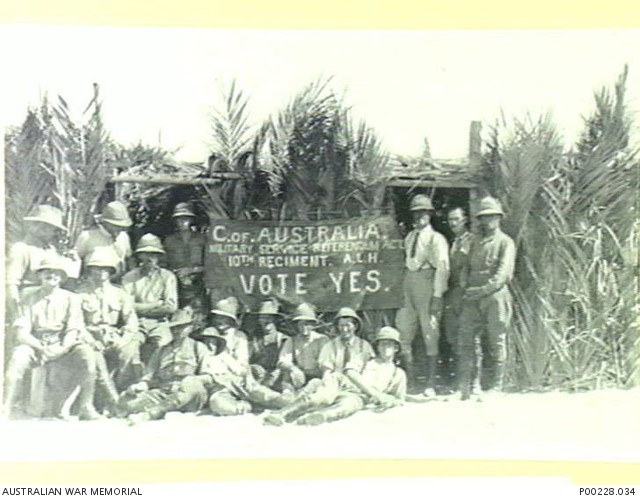 Group portrait of the officers of the 10th Light Horse Regiment who voted in favour of military conscription in the referendum, pictured with their "How to Vote" banner. AWM P00228.034

On this day 100 years ago, Prime Minister Hughes put the referendum to the people. The Government asked Australians:

The question split the nation and made headlines across the country, despite the The Kangaroo Island Courier reporting the Prime Minister's appeal at the inaugural campaign function in Adelaide as "one of the most magnificent and inspiring functions known in the city."

Notices of anti-constription meetings1 and advertisements, such as the one below, were drowned out in the press by those for conscription, who had little difficulting in painting the "no" vote as one which would give tacit support to the German Army.2 Across the country, newspapers such as The Sydney Mail regularly printed letters in support of William Hughes, which argued that Australia, and the White Australia policy, would only be safe if more men were sent to thoroughly rout the Kaiser.3 And headlines such as "Facts Appeal to Women: "No" Weaknesses Exposed,"served to garner support from female voters, many of whom had already lost sons, brothers and husbands to the fighting.4