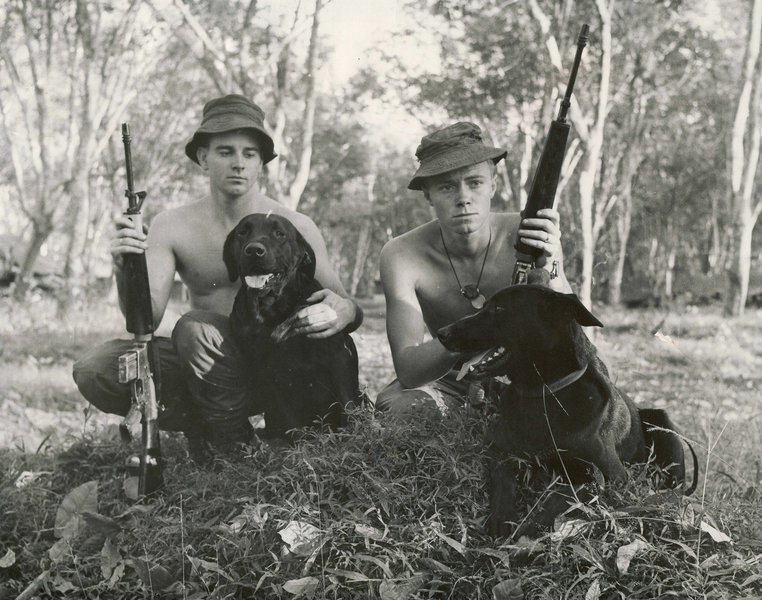 Caesar served with Peter Haran and 2RAR/NZ in South Vietnam from 1967 to 1968. The following is Peter's account of their first track.

I have no date or any other record of the first track I did with Caesar – but I remember it well because it was the FIRST track.

An orderly ran down from the company headquarters tent at Nui Dat and said “trackers are wanted at the chopper pad ASP…landrover’ll be at CHQ”.That could only mean we had a job.

I went into autopilot, swung my basic webbing on then the pack. I remember it weighed a ton already. Adding an entrenching tool (a small shovel) – and a machete had piled on more weight.

I wobbled rather than ran up to the kennel, grabbed Caesar’s walking lead and clipped it on just as the landrover pulled up and we got in. That was my coverman Les and Bob, a corporal and accomplished visual tracker.

Bob said he knew nothing as to the contact or the platoon involved while we made the five minute driver to what was called Eagle Farm, a smallish chopper pad in the rubber exclusively used by 2RAR.

My head was still empty of thoughts other than controlling Caesar when the Huey suddenly was there and touching down. We were in. Going up and nose down over the rubber trees while the door gunner gave us thumbs up and grin. He leaned over to Bob and shouted “Delta”.

So it was Delta Company.

It was cool and I rubbed Caesar’s head, which he was shoving, out the open door space. He then came back and placed both paws on the control panel between the pilot and first officer and peered out the forward screen. They grinned and looked at me with who is this!

The dog knew later we were approaching the D company position because he got himself next to the door for his famous I-can-grab-the- blades act. The pilot called for smoke to be thrown as a marker and banked when he saw the yellow smoke grenade gush at the edge of a clearing.

We were down and out, me dragging the errant dog, and into the thick bush where two soldiers with cam cream all over their faces waved us into a secure spot.

Let me say I knew this was suddenly real because of the look on the other soldiers’ faces – it was dead-set serious, drawn, eyes and heads spinning left and right. I felt rising concern, and my mouth was dry and at that point I did not want to be here.

In just minutes Bob had spoken to the platoon commander and then knelt to tell me the platoon was stopped for a brew but on high alert on a foot track. At that point a group of enemy had walked casually into the Australians who cut loose with Armalites and a machinegun and wounded at least one.

It seemed less than minutes that I was told to harness up the dog and get going.

We didn’t need visual start because I was looking down at bright red blood in the dirt.

My feeling when I told Caesar to “seek” was numbness. Why did we have to start so quickly and why didn’t we have a cup of coffee and chat about what to do?Irrational I know - attitudes I had in Bulli forest and at Tracker Wing now did not apply.

This was a live track and these people did not want to be followed… Caesar put his nose down and jerked forward. We were on the smellscape and away.

My next panic moment came when I found we were not following a scent trail through the bush but we tracking on a track. We had virtually never done this in training. That was because Australians did NOT walk on tracks – ever.

You did that you got shot, ambushed. Hit by enfilade. Madness.

But think, if you are pissing off at great speed you will obviously run along a track, not through the Jungle.

As a result I was looking down at actual boot prints of the enemy, Caesar was smelling the scent. The track was, I think, only about two hours old and when I saw blood and what looked like human intestine next to my feet I heaved.

Bob stopped me for a minute and while Les covered him checked the boot prints.“Six or more and really hoofing it,’ Bob said. “Watch it.”

That was a totally unnecessary remark, as I tracked on watching the dog every sense in my body was reaching out to my front: my nose, my eyes. My ears, my whole fibre was reaching forward for any indication of enemy.

My next recollection was the ground under my feet vanished and I was flat on my back in a hole looking up at trees.

I felt sick when I stood up and realised I had fallen into an enemy weapon pit (a foxhole) which was waist deep and gave a view straight down the track we had come up. A sentry could have been in this and chopped us up with one burst.

I saw Bob on the ground his rifle to the front calling back “the dog handler’s fallen in a hole!” I spun around and saw Caesar sitting, ears up looking straight ahead.

My recollection was a thought he was pointing - and for the first of many times in the days ahead I felt that unreal taste of metal in my mouth like I was sucking dirty pennies.

Bob was next to me and said, “track on.” I did about 40 more metres when Caesar pointed.  I went straight to my knees and put my hand behind me with thumb down (enemy signal).

Ahead there was a white sheet or shroud on the ground. I knelt and studied the bizarre sight. It got more bizarre when Bob and I cautiously moved up to it.

Hundreds of white butterflies covered the dead soldier’s body. As we looked on they all took off and I was looking at my first VC KIA. They were sucking the fluids from his body Bob reckoned.

The VC looked like an earthquake had gone off inside of him; his skin and muscle tissue had ruptured from the impact of automatic fire. His eyes were half open but opaque. I desperately needed a cigarette. So bugger the war, I smoked two quick fags

The platoon closed up and extended to sweep through.  I took the harness off the dog and put his walking lead on. I gave him lots of “good dog” and a drink from his canteen. To him that meant work was over. We’d done about a kilometre.

Ahead was a bunker system. The enemy had dropped their dead comrade, alerted others in the bunkers who had fled. The platoon moved in. My first track ended at that point and word came through later were staying with the rifle platoon that night to lay ambushes around the encampment.

I thought we had did half well. Caesar had done a textbook track and pointed. I had seen that point at the dead Noggie. We had made a valuable find, a bunker system but nobody was waiting for us. I also figured I had not noticed the weight of the back pack – until took it off.